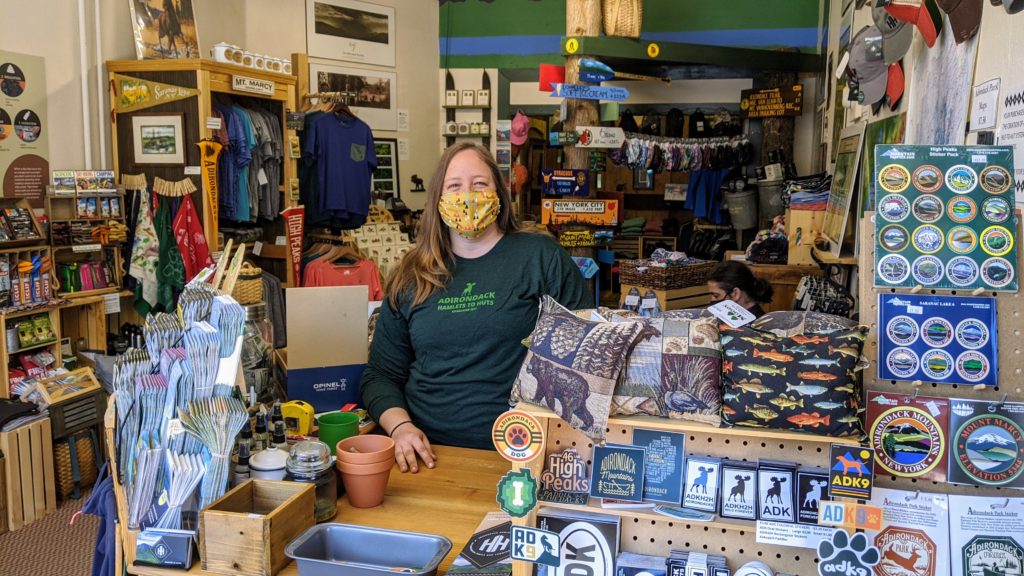 The Adirondack Hamlets to Huts store in downtown Saranac Lake is one of many local businesses that have reopened, with precautions such as wearing face masks. (Photo provided by the Regional Office of Sustainable Tourism)

LAKE PLACID — The Adirondack Park has seen an uptick in tourism throughout the last few weeks as the region moved through the four phases of reopening its economy, and as it moved from mud season to summer. Essex County public health officials say the steady trickle of tourists hasn’t contributed to the number of local COVID-19 cases yet.

The seven-county North Country region entered the last of four New York state phases of reopening this past Friday, 13 weeks after Gov. Andrew Cuomo signed an executive order directing all businesses deemed “non-essential” to close their doors. Some businesses — such as movie theaters, malls, gyms, bowling alleys and mini-golf courses — remain closed as the state puts together guidance for how to safely reopen those operations, saying their ventilation systems could spread the virus.

With many New Yorkers in quarantine for weeks, the warm weather and good hiking conditions have also brought out nature seekers. More than two weeks ago, the Regional Office of Sustainable Tourism began its “Community Jumpstart” phase of marketing and promoting local businesses regionally, but not yet statewide.

For the most part, locals and visitors seem to have been adhering to public health recommendations — wearing masks when social distancing isn’t possible, staying home when they’re ill, washing and sanitizing their hands as often as possible.

“With the reopening of NY and our region now being in Phase 4, we have seen an uptick in visitors,” Essex County Health Department Public Information Officer Andrea Whitmarsh said Wednesday. “So far, this has not lead to an increase in cases. Our last active case completed their isolation period at the end of the day yesterday. So, at this moment, we have zero active cases in the county.”

The county Health Department does “a thorough investigation of every case,” she said, which includes “extensive contact tracing,” but she said the department is able to determine whether a case stems from tourism.

“We determine travel history, which includes where cases were prior to and during their symptomatic period and also how they traveled, including whether public transportation was utilized,” Whitmarsh said.

“We have had cases related to travel, but it’s mostly been limited to Essex County residents traveling to other areas and then coming back to their homes here. These areas include NYC, other states within the U.S. and international locations.”

On the day the North Country region was cleared for Phase 1 reopening, May 15, Essex County had just one active case of COVID-19 and a total of 33 test-confirmed cases since March 17, when the first local case was confirmed. Since then, the number of active cases peaked at five on May 21, eight days before the region entered Phase 2, before dwindling to zero by June 16, picking up with a few new cases, then returning to zero on Wednesday.

Neighboring Franklin County also had five active cases on May 15, the day the region was cleared for Phase 1 reopening, with a total of 15 test-confirmed cases since the county’s first case on March 24. The number of active cases in Franklin County after Phase 1 reopening peaked at four on June 1, dwindled to zero on June 8, and has fluctuated between one and four at a time since, peaking again at four on Tuesday.