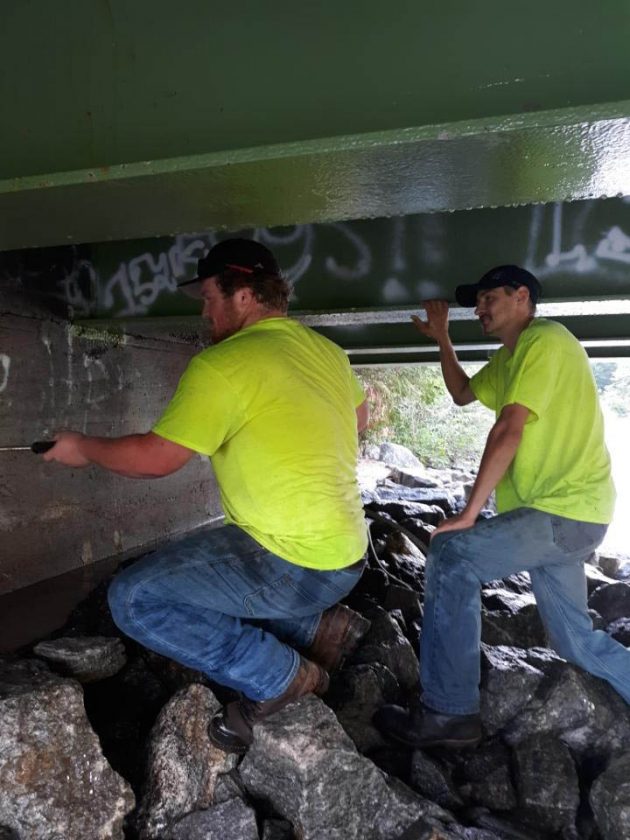 According to State Police spokeswoman Jennifer Fleishman, both are males from Bloomingdale. One is 14 years old and the other 15. Police did not identify them.

Jennifer Everritt of Bloomingdale was letting her dog Ruby swim in the water on Friday when she found the graffiti.

“N*****s stink!” was the racist message. On the beams, two swastikas had been crudely painted.

Surrounding it were other, less offensive spray-painted words, including “2020” and several names.

St. Armand town Supervisor Davina Winemiller said a town crew used a pressure washer Monday morning to remove the graffiti slur from the concrete wall and plans to paint over the swastikas on the beams.

Sumner Brook is fed by several other waterways, including Black Brook, also known as Negro Brook, or its original name, N***** Brook. Maps and official documents from the 1940s, provided by amateur historian Phil Fitzpatrick, referred to it by its slur name. The brook got its name because several Black families lived along Oregon Plains Road, where they farmed apples. The abolitionist Gerrit Smith pledged to give around 120,000 acres of land to Black families looking for a place to settle in the buildup to the Civil War, and he gave away land in that area, according to according to the book “Blacks in the Adirondacks,” by historian Sally Svenson.

In a separate incident, racist slurs were written on a railroad bridge in Saranac Lake in late June, which a local man painted over with police permission. Saranac Lake village police Chief James Joyce said his department is working “around the clock” on investigating who did it, whenever they are not working on something else. After the incident got the attention of Gov. Andrew Cuomo, Joyce have been working with the State Police, too.

Non-racist local graffiti has shown up recently as well. On June 26, the same day the slurs and expletives were found on the trestle, four skateboard logos were found spray-painted on a retaining wall next to the Saranac Lake Skateboard Park, according to village Trustee Rich Shapiro, one of the park’s founders. He said he and another person caught two girls making the graffiti and had the girls help remove it.