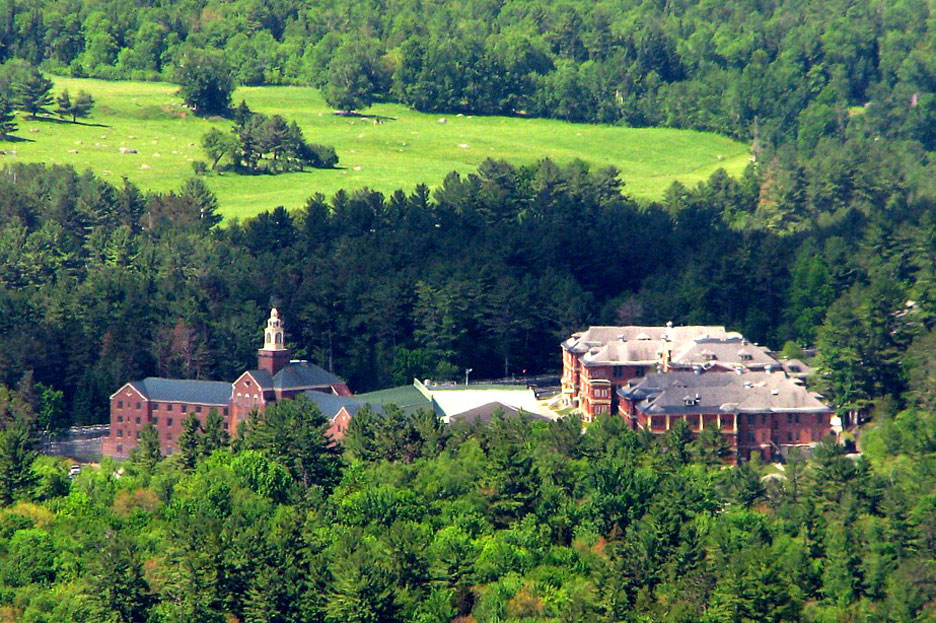 Adirondack Correctional Facility in Ray Brook is seen from Scarface Mountain in June 2013. The buildings were originally built around 1904 as a state hospital for tuberculosis patients. (Provided photo — Marc Wanner, Historic Saranac Lake)

RAY BROOK — The state Department of Corrections and Community Supervision has taken some steps to release and test inmates at state prisons during the coronavirus.

Local and statewide prison reform groups have requested the elderly inmates at Adirondack Correctional Facility in Ray Brook be released due to the coronavirus, and though that request has not been answered yet, they have their sights set on further reforms, believing there are still many changes to come in New York corrections.

In response to COVID-19, DOCCS expanded the testing age, which was initially limited to inmates 65 and over, to include inmates 55 or over.

According to DOCCS, there are 80 inmates at the Ray Brook prison, but New York State Correctional Officers and Police Benevolent Association Vice President John Roberts said he called the facility Thursday afternoon and was told there were 96.

DOCCS says it has transitioned 1,220 people from prisons back to the community so far due to the coronavirus, meaning the state correctional population as of July 2 was 38,325, according to department spokesperson Rachel Connors.

“This represents both a total reduction of over 5,000 individuals since Jan. 1 of this year and the lowest total incarcerated population in New York State prisons since 1986,” Connors wrote. “In the coming days and weeks the Department anticipates hundreds of additional releases.”

Connors said DOCCS is reviewing inmates of all ages who are within 90 days of release for potential early release. She said this is excluding people serving sentences for A-I or A-2 non-drug offenses, class B through E violent felony offenses or a sex offense. Their release will be reliant on an assessment that they do not pose a risk to society and that they have housing available when released — so they do not end up at a congregate shelter, which could be dangerous for spreading the virus.

According to Connors, DOCCS has also released 12 pregnant or post-partum women, all of whom were not committed on violent felonies or sex offenses and were within six months of an approved release date.

There are numerous state and federal prisons in the North Country, many of which are major employers for their respective towns. This fact is not lost on the advocacy organizations.

“It’s a time for us in the North Country to take a long hard look at the dependence of our economy on corrections,” said Martha Swan, director of the Westport-based John Brown Lives.

She calls this a “human rights issue hidden behind the tree lines.”

Representatives of John Brown Lives, Wake the North Country and the Release Aging People in Prison Campaign will be protesting at the corner of state Route 86 and Old Ray Brook Road, down the street from the prison, today at 5:30 p.m.

Corrections is often thought of as a necessity for the North Country economy — bringing jobs, state money and infrastructure. Prison reform advocates say they provide employment but are not economic drivers.

The state spent millions of dollars retrofitting Adirondack Correctional for adolescent offenders, but after two years of the facility housing only around a dozen or more teens on average it was reconverted into an adult prison and the inmates were transferred to the supervision of the state Office of Children and Family Services.

“The past thirty years have made it clear that prisons do not work for rural economic development,” the book “Deincarcerating America” says of the Adirondack prison industry, while referencing an old Enterprise editorial titled “Say no to closures.” “State money comes in, but little more. Prisons are not investments that attract other investments, like an airport, college, hospital or factory. To the contrary, other enterprises appear to avoid a prison town.”

Swan echoed this point, saying she believes prisons are not improvements for communities. Instead of an investment, she thinks they are a “divestment” in the communities where they are placed.

“If you drive down the road in Dannemora, for example, there are very few businesses,” Swan said.

“Deincarcerating America” says this makes communities reliant on prisons as they become the primary employer and economic driver of a town.

“Thus, the loss of a prison leaves a hole in the local economy,” the book says.

The local prison reform advocates have a long-term goal, too.

“When investments are made in New York communities the need for corrections will go away,” Swan said.

The way prisons in New York operate has changed over the years. David George, associate director of the Release Aging People in Prison Campaign, said the people in prisons today are there for more serious crimes than in the past, as drug laws have been reformed. Still he said they have the ability to transform their lives, and state prisons do not support that.

“New York prisons are not focused on rehabilitation, so much as vengeance and punishment,” George said.

“What kind of a people are we?” Swan asked. “Do we want to exact every pound of flesh and every ounce of blood? … Or are we capable of reason? Are we capable of compassion?”