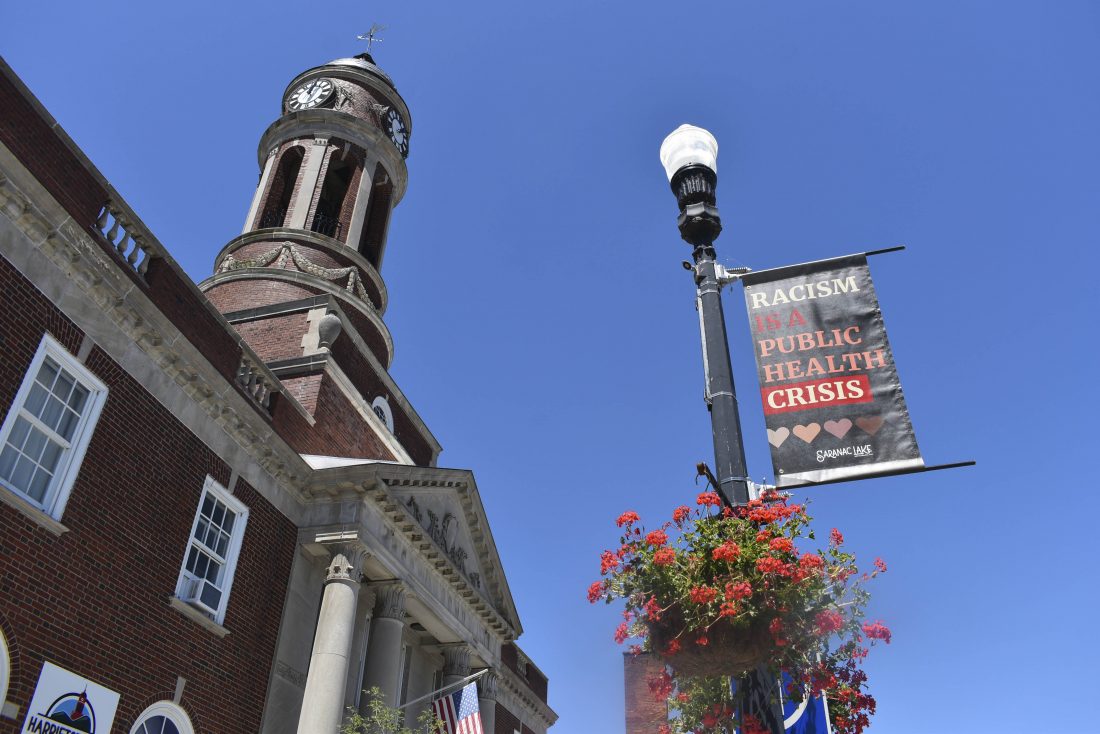 A banner that reads “Racism is a public health crisis” is seen here Monday afternoon outside of the Harrietstown Town Hall. The village of Saranac Lake put up the banners throughout downtown. (Enterprise photo — Elizabeth Izzo)

BLOOMINGDALE — Racist graffiti spraypainted on the underside of a bridge on Oregon Plains Road over Sumner Brook will be painted over by the town of St. Armand today.

The graffiti — most of it commonplace and inoffensive — contained a slur within a racist phrase, and two swastikas which a resident noticed last week while walking her dog.

The graffiti was written in white paint on the concrete and beams in the middle of the low bridge over the brook. “N*****s stink!” was the racist message. On the beams two swastikas had been crudely painted.

Surrounding it, and layering under and over that phrase were other less offensive scrawlings, including “2020.”

Jennifer Everritt, of Bloomingdale, was letting her dog Ruby swim in the water on Friday when she found the graffiti.

“It’s very disturbing. That’s always been a peaceful place for people to go,” Everritt said. “It just puts a terrible, bad taste in your mouth. It’s awful to think that would happen in our little town of Bloomingdale.”

Everritt said she goes to that spot often and that there’s been graffiti she’s seen recently, but never paid much attention to.

She reported it to the state police that day and in the evening a trooper was on the scene taking photos for evidence.

Everritt said she was pleased with the quick response from both state police and the town.

She said she hopes the people who left the slur know their actions have consequences and that writing offensive slurs is not funny.

“This discovery has made my family feel beyond disappointed, sick, and disgusted,” Everritt wrote in an email.

St. Armand Town Supervisor Davina Winemiller said the town will send a crew to paint over the slur today.

Winemiller said Everritt had texted her about the graffiti and that she was angry and disturbed to hear about it. She said the phrase goes against the town’s values.

“St. Armand is opposed to any type of discrimination,” Winemiller said. “For someone to judge any person based on the pigment of their skin is ridiculous. … We’re all one race, the human race.”

Winemiller said before she was the town supervisor she was the town historian. She got a grant for an exhibit in the center of the town Veterans Memorial Park, commemorating Civil War veterans and wrote about the town’s history for the exhibit. She said the town of St. Armand sent the most soldiers to the Civil War of any town in Essex County.

She said some residents in the town are descendants of enslaved people whose families settled in St. Armand.

This summer has been filled with incidents local and national spotlighting racism. Racist slurs were written on a bridge in Saranac Lake. Adirondack Diversity Initiative Director Nicole Hylton-Patterson said she is moving out of Saranac Lake, citing concerns for her safety. Francine Newman, Saranac Lake High School’s valedictorian, gave a speech about anti-Asian racism she endured while at school. Several tows in the Tri-Lakes area have held Black Lives Matter rallies, attracting hundreds of protesters, after the police killing of George Floyd in Minneapolis on May 25.