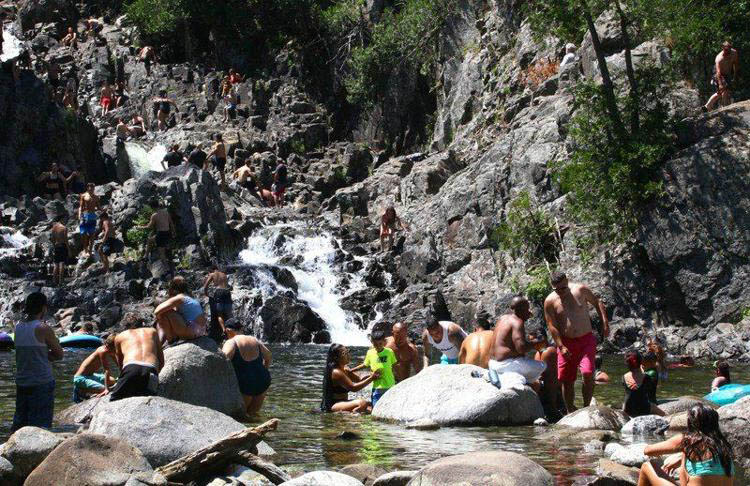 The warm weather over the Fourth of July weekend drew many to areas to cool off, such as Split Rock Falls south of Elizabethtown. (Provided photo — Alvin Reiner, Press-Republican)

PLATTSBURGH — Local public health officials say small increases in active COVID-19 cases, like those experienced recently, are to be expected.

“I wouldn’t go as far as saying that we have some spike in cases,” Essex County Director of Public Health Linda Beers said.

“I would say that this has been a status quo. We ebb and flow to this number.

“I don’t believe that we are experiencing an increase in cases any more than the normal flow of things.”

“Not a big spike”

As of Friday, there were five active cases in Essex County and six in Clinton County, up from zero on July 1.

Franklin County reported three cases as of Monday, down from six at one point last week.

“Statistically speaking, one to two new cases per day for a few days is not a big spike and can be considered relatively normal and expected,” Strack said.

Strack additionally noted the impact of increased testing due to both mandates and easier access as well as the higher number of gatherings allowed.

“It is more difficult to enforce social distancing or mask wearing.”

A true COVID-19 spike could manifest itself in many ways, Beers said, including overloading the health department or area hospitals, or putting so many people in quarantine that too many are out of work.

“We are closely monitoring this and are prepared to scale up our response.”

Strack said there was no indication that the Franklin County cases were associated with travel outside the county or tourism, with a few isolated situations.

Counties are receiving flight manifests from airports that will allow health departments to touch base with those who are coming from certain states and, by executive order, must quarantine for two weeks, Beers said.

According to a press release sent out Wednesday, all the active cases in Clinton County reported then were “acquired locally.”

Counties are receiving complaints that come in to the “New York on PAUSE” tipline.

Beers explained that the local health departments manage specific complaints, such as a server at a restaurant not wearing a mask or a quarantine violation.

The Essex County Health Department also tailors its messaging based on the complaints that come up or what the “public pulse” is at the time.

“If we hear (about) low compliance in masks, we’re going to start shooting out messaging about masks,” Beers gave as an example.

Broader complaints are passed to the county’s control group and, from there, the relevant municipality.

For example, the health department would not handle the gatherings of mask-less people at Split Rock Falls reported last weekend.

“Those supervisors of those towns can create individual responses based on the needs of that community,” Beers said.

“They’re the best to do it. They know their people and their constituents.”

Beers discussed balancing the knowledge that tourism is a huge part of Essex County’s economy with the public health of residents and visitors.

“You can’t go two steps removed without any one of us having some family member that’s been affected financially from this so we’re very cognizant of that,” she said.

“We take very seriously limiting anybody’s social liberties, we do, we really hold that in high regard and would only do it if it’s a matter of public safety.”

Beers noted that she has worked with the Regional Office of Sustainable Tourism and commended the North Country Chamber of Commerce’s work to get updates and information out to its member businesses.

“I think that the industry in Essex County, all tourism, they have really bent over backwards and have strived to make any experience up here as safe and as compliant as possible.”

In a press release earlier this week, Clinton County Director of Public Health John Kanoza pointed to outbreaks happening around the country as a reminder for county residents to remain vigilant.

He also noted that just because you feel fine does not mean you cannot transmit the coronavirus.

“Recent studies show that individuals can spread COVID-19 to others without ever experiencing symptoms themselves (“asymptomatic“), and that even those who eventually develop symptoms can transmit the virus to others before showing symptoms (“pre-symptomatic“).”

Beers said her health department is pushing the three Ws: Wear your mask, wash your hands, and watch what you’re doing and where you are.

The officials stressed that masks were essential for limiting the spread of COVID-19. That also applies when you are outside, Beers added.

To file a complaint regarding a gathering, business or other entity that has violated COVID-19-related requirements, visit coronavirus.health.ny.gov/new-york-state-pause or call 1-833-789-0470.