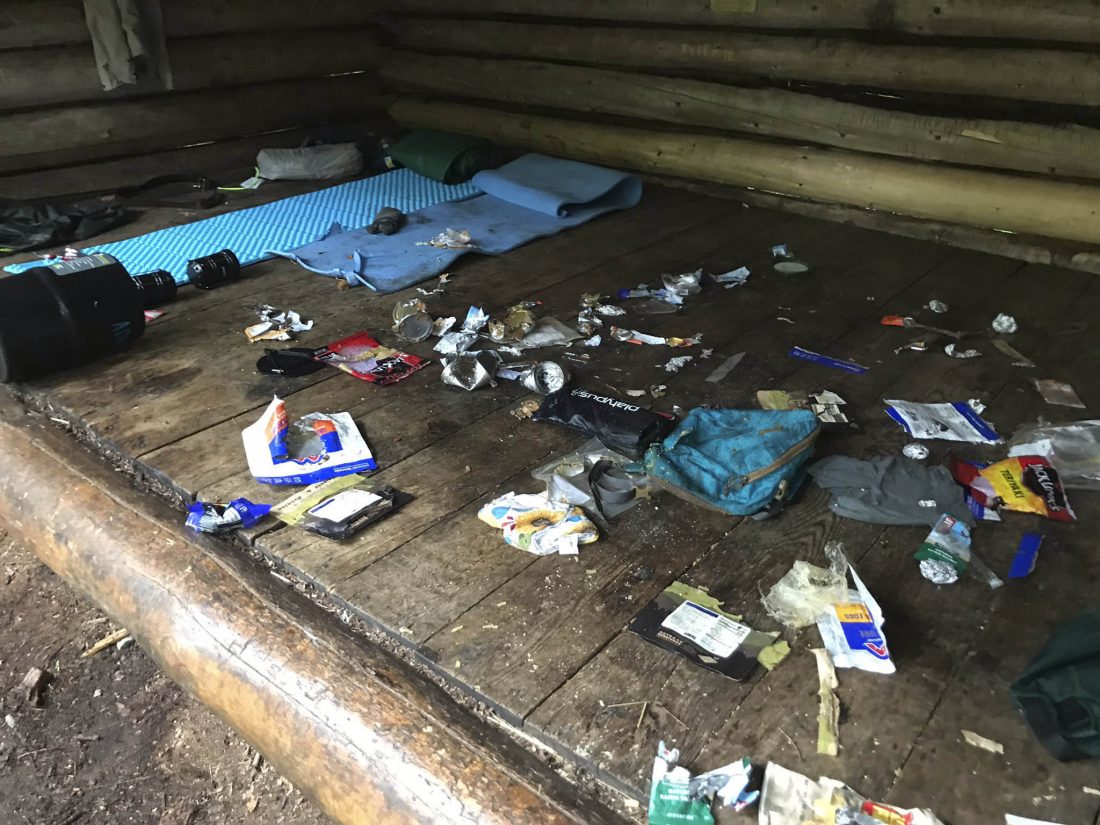 The aftermath of a bear encounter at the Calamity Brook lean-to is a mess of torn food packaging and destroyed gear. The state Department of Environmental Conservation says the hikers got away safely but that the bear destroyed their food supply after it approached them while they cooked and transferred food in their bear canister. DEC says that was not proper bear canister use. (Provided photo — state Department of Environmental Conservation)

LAKE PLACID — Two hikers were camping at the Calamity Brook Lean-to in the High Peaks Wilderness when they were approached by a large bear earlier this week, according to the state Department of Environmental Conservation.

The bear was after their food, and while the hikers were able to avoid the danger, their packs were ripped apart and their food devoured by the bear.

They attempted to scare off the bear but were unsuccessful, and the animal consumed the food from the open canister. Mowrey said this left the hikers without food and forced them to end their trip early.

Photos taken by DEC forest rangers show food packaging torn open and scattered around the lean-to floor from the bear’s impromptu smorgasbord of beef jerky, granola bars and dehydrated meals. A close-up photo of a bean can shows the tin cylinder ripped in half, with puncture marks through the metal.

“Get the food out you are going to eat and then immediately lock it,” Forest Ranger Scott van Laer wrote in a tweet. “Don’t cook or eat where you sleep.”

According to Mowrey, bear canisters should be kept at least 100 feet away from tents, lean-tos and sleeping areas at all times. Their lids should be secured immediately after adding or removing items from the canister. All items with a scent — including food, trash and toiletries — should be stored in bear canisters.

“Overnight visitors should cook and eat before dark and should never cook or eat in a tent, lean-to, or sleeping area,” Mowrey wrote in an email.

“We are doing well with campers bringing bear canisters but we are still having issues with improper use,” van Laer wrote.

If backcountry campers or hikers do see a bear, the DEC says they should group up, raise and wave their arms, speak in a loud voice, make loud noises by banging pots or clapping, and warn others that there is a bear in the area.

Mowrey also said she encourages visitors to report food and gear loss or close encounters to the DEC, and she encouraged backcountry hikers to carry bear spray, keep it readily accessible and know how to use it.