Stefanik: ‘Law enforcement has been under attack across this country and in this state.’ 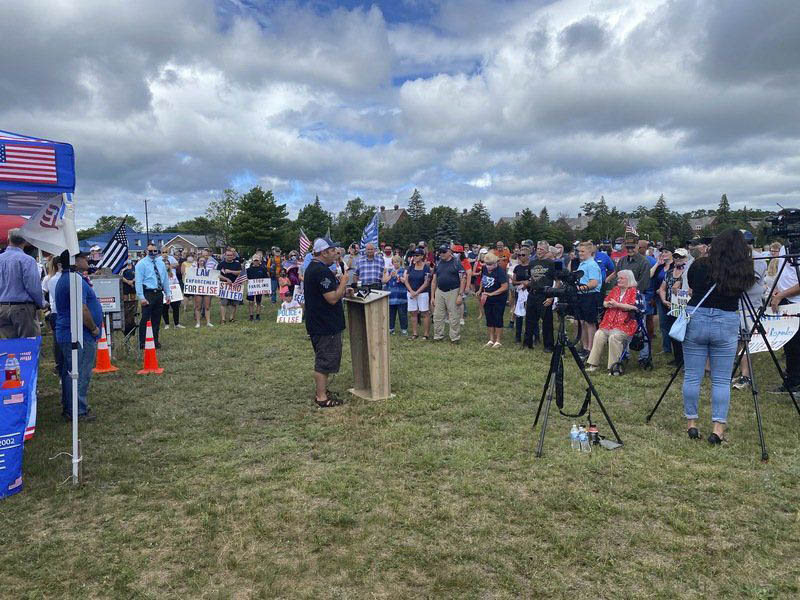 Event organizer Randy Tedford addresses the crowd at Sunday’s Back the Blue rally at the Oval in Plattsburgh. (Provided photo — Joe LoTemplio, Press-Republican)

PLATTSBURGH — The large crowd that turned out for Sunday’s Back the Blue rally to support law enforcement at the Oval in Plattsburgh told organizers the message was clear.

“I’m overwhelmed at the amount of people that came out,” organizer Randy Tedford said. “This shows that there is definitely a lot of support for law enforcement, and it is good to let them know that we got their back.”

The event was designed to show support for law enforcement and the U.S. military.

Tedford said recent events across the nation have depicted law enforcement in a negative way, and he felt it was important to let people know that was not the case.

“I was watching the news one day and got really frustrated with what was going on with the mainstream media and how they were portraying law enforcement as bad guys, and that is not acceptable. You can’t judge a complete entity for a couple bad apples.”

A correction officer himself, Tedford said he was moved to organize some kind of event to demonstrate the community’s support for law enforcement and the military.

The large crowd of about 300 people featured dozens of American flags and signs showing their support. Many were not were wearing masks due to COVID-19.

A parade of about 100 vehicles made its way from Champlain Centre Mall down Tom Miller Road and through the city of Plattsburgh, ending up at the Oval.

“I thought this was a way to show our law enforcement that the silent majority has got their backs,” Tedford said.

“And also our military because they also seem to get a bad rap as well.”

Trudy Murtagh of Plattsburgh was among the crowd Sunday with her granddaughters Kylie, 10, and Emma, 5.

Her husband is retired from the U.S. Air Force, and his father was a World War II veteran. Her husband’s family has members who are now working for the New York City Police Department.

“We are very much against what’s happening to our police officers right now, and what they face every time they walk out the door,” she said.

“It’s disgusting what they are faced with every day they are trying to do their job.”

“We know in this region how important law enforcement is to the safety and security of every family in our community,” she said.

Cries for defunding the police rose in the wake of the death of Minneapolis man George Floyd, who was Black, at the hands of police on Memorial Day.

Weeks of protests against police brutality followed across the nation with Black Lives Matter calling for major changes in law enforcement.

Stefanik, R-Schuylerville, said defunding police now is not the answer.

“There are many, many concerning things happening in this country right now,” Stefanik said.

State Assemblyman Daniel Stec said law enforcement has not received the support they should from state government in recent years.

Bail reform, which was approved in New York last year, and defunding police departments are not good moves, Stec said.

“Now we are seeing the fruits of that (bail reform) with the revolving doors, with the cops trying to do their jobs,” he said.

“They catch them, release them, and they are back out on the street minutes later, and some of them are doing the same exact thing they were arrested for an hour later. It’s absolutely crazy.

“Now we’re in it again and they want to defund the police, which is crazy. If there is one tenet of government it is public safety. There are good people and there are bad people in this world and those are the realities.”

State Assemblyman D. Billy Jones, a former correction officer himself, was invited to the rally but could not attend because of a prior commitment.

Tedford said Sunday’s rally was similar to the Black Lives Matter protests in a way.

“They’ve (BLM) got their right to peacefully protest or do whatever they want to do, but one of their main messages is don’t judge a group by a couple bad apples,” he said.

“It is the same with law enforcement and our military. You can’t lump everybody into one group.”