Youth sports can start in July 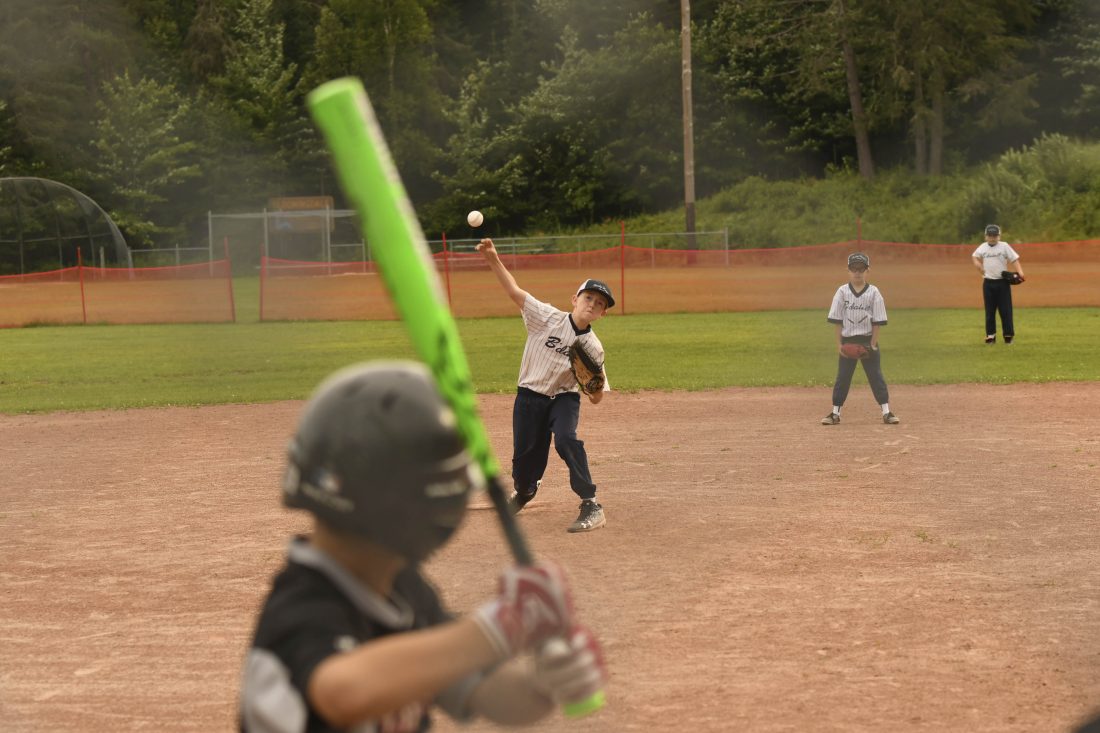 Caleb Akey fires a pitch toward the plate and a batter from a Tupper Lake squad during a youth baseball game at the Bloomingdale Volunteer Fire Department diamond on July, 12, 2017. (Enterprise photo — Lou Reuter)

Youth sports can begin this summer for regions of New York in Phase 3 of coronavirus reopening — which the North Country is — Gov. Andrew Cuomo said in a press briefing Sunday, but players will only be able to bring two spectators each.

Cuomo called this “another step towards return to normalcy.”

Mark Gillis, an organizer with the Saranac Lake Youth Baseball and Softball Association, said the league, which also has teams in Tupper Lake, Lake Placid and Bloomingdale, has a “moving plan” it has built with all the towns.

He said the kids will start having practices soon, with games starting around two weeks after the July 6 start date.

Gillis said the two-spectator rule seems “a bit overboard,” especially for upstate leagues, and said that if spectators can socially distance properly, he is not sure why the whole family can’t come.

“It’s difficult when they come up with these guidelines because they encompass the whole state. They don’t get specific to regions,” Gillis said. “I think this will be hard to police.”

He said the kids will be very excited to be able to participate in activities again.

“I know my little guy has been jumping up and down, just trying to do anything,” Gillis said. “Baseball, basketball, what have you. Heck, even a horseshoe tournament. They just want to see their friends again.”

Gillis said the kids are looking forward to the socialization of sports, too, since they stopped seeing their friends in school in March.

Lake Placid’s Dale Hayes is the owner and general manager of the Adirondack Lightning, which is an independent youth travel baseball organization. Hayes said Adirondack Lightning plans to field two teams this summer — an under-20 and an under-14 squad. He is the head coach of the U20 team and an assistant for the U14 group, and said the first practice takes place tonight as the teams prepare for a hopeful season. Hayes said his players come from across the North Country, including Saranac Lake, Lake Placid, Beekmantown, Plattsburgh and Malone. He added that in the past, the Adirondack Lightning has had a handful of players from Canada, but they will not be involved this summer due to border restrictions.

“We have initiated our protocals,” Hayes said Sunday, adding that he was working on additional plans on how his teams will be playing this summer.

Hayes said there are numerous changes taking place with the game at this level and included a number of examples of how play is expected to unfold. He said all players will have their own batting helmets. If bats are shared, they will be sanitized each time they are picked up by another player. If an infielder or outfielder touches a ball during an inning on defense, they will be required to use hand sanitizer when they leave the field.

Another rule will be the defensive player on first will be required to wear a facemask if there is a runner on first base. Because they are in close proximity to batters, the umpire and catcher behind the plate will be wearing a faceshield designed to fit over the protective masks they have always worn.

In terms of fans, Hayes said if games are played back-to-back, which is normal when it comes to tournaments with multiple teams, he has a plan in place to quickly move out the group of spectators from a game that that just ended and bring in the next group.

David “Haji” Maroun, from Tupper Lake, was excited to hear about this announcement. He said a Tupper Lake U14 team in the (league) already has games scheduled in the Tri-Lakes, although he added that the team’s Canadian games have been cancelled because the border is closed.