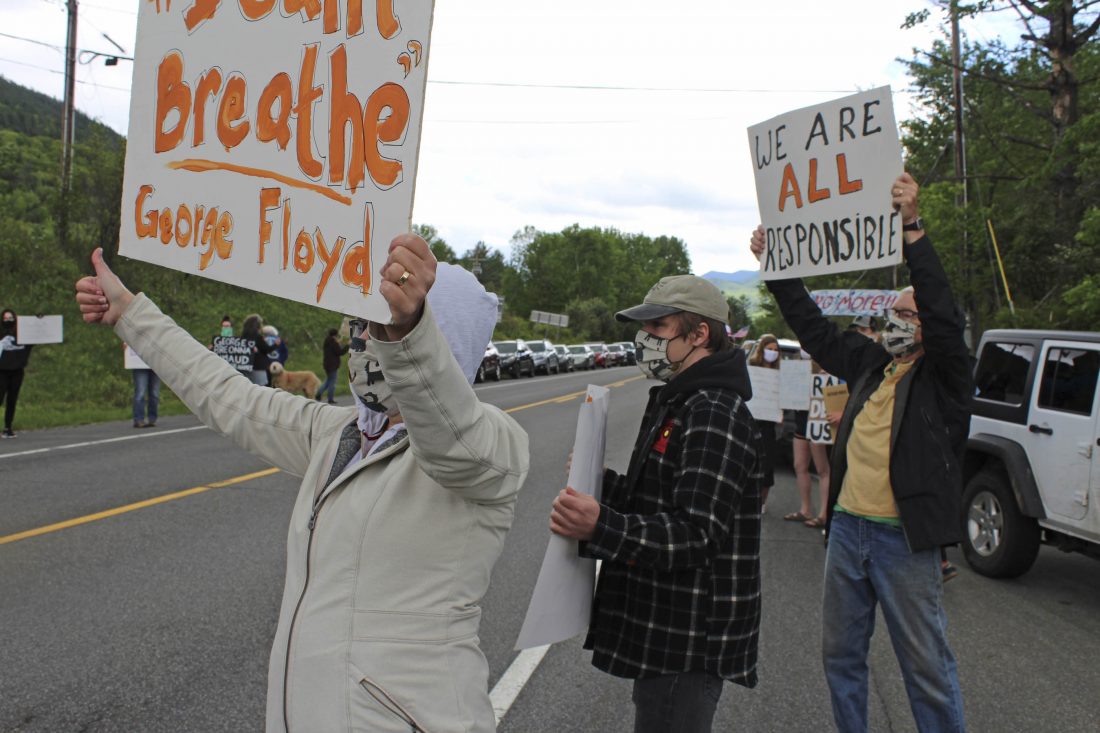 Protesters decry police killings of black people such as George Floyd of Minneapolis Sunday at the intersection of state Routes 73 and 9N in Keene. (Provided photo — Naj Wikoff)

As widespread protests continue over the death of George Floyd, a black man who died in handcuffs as a Minneapolis police officer knelt on his neck for nearly nine minutes, state lawmakers in Albany are talking about possible police reforms in this state.

State legislators are discussing the future of New York’s Civil Rights Law Section 50-a, a statute that has been used to shelter the personnel files — including disciplinary records — of police officers and other state employees from the public.

Gov. Andrew Cuomo on Saturday said he would “sign a bill today that reforms 50-a.” That sparked immediate pushback from law enforcement unions, but also received support from 76 organizations — including labor unions, police-reform groups, civil rights organizations and public defenders associations — in a letter to state lawmakers Monday, the Albany Times Union reported.

Though northeastern New York’s state representatives are united in their horror over the death of Floyd, all three of them said on Monday they’re opposed to a total repeal of the 50-a statute. Instead, many said they would consider supporting reforms that would allow more information to be released while keeping police officer protection as a priority.

The Minneapolis Police Department has said Derek Chauvin, the officer who has been charged with third-degree murder and second-degree manslaughter in connection with Floyd’s death, had 18 prior complaints against him, although it did not detail what those complaints were about. That fact is accessible to the public under Minnesota law statue 13.43, which states that the results of disciplinary actions are public data — with some caveats. However, the New York statute keeps these disciplinary records sealed from the public.

State Sen. Betty Little, R-Queensbury, said transparency in police records is important but that she would not want a reform of 50-a to go too far. Little wondered if relevant portions of a personnel file could be released without releasing a whole file. Little said that if Chauvin had prior complaints in his personal file and was allowed to stay on the force, that is the fault of the police chief and the people in charge of that department.

Little added that she believes the officers who stood by as Floyd was killed should be convicted, too, but she is not sure if that will be possible.

State Assemblyman Billy Jones, D-Chateaugay, who has years of experience in law enforcement as a prison guard, said repealing 50-a could lead to the release of unproven accusations.

“You’re getting into a lot of … accusations you can release, a violation or anything on your record,” he said. “I don’t think anyone wants that in their workplace.”

Jones added, “If a teacher gets a complaint from a parent, should that be released?”

Assemblyman Dan Stec, R-Queensbury, said the 50-a statute has not been discussed in the legislature in a long time, but he has historically not been a fan of making big changes.

He worries that a revision or repeal would go too far and cause “legitimate privacy concerns” over officers’ personal information. He said police officers have a hard job, and he worries about them being targeted by the people they arrest.

Stec said the legislation could be “perverted” and said he would rather address specific issues when they pop up rather than “open the valve” to legislation that releases more information than it should.

“I’ve seen examples where somebody will find a reason to make a change, but in the name of that … one thing that was wrong, they’ll write legislation that will go far beyond that,” he said.

Stec also echoed comments made by Cuomo on Monday as well as comments made by Jones and Little, saying there are mechanisms already in place in the courts to release disciplinary information.

While there are ways to request these files through the courts, New York State Police and other law enforcement agencies have frequently cited the 50-a statute in response to Freedom of Information Law requests, and state judges have not let much get out in the 44 years since the statue was adopted — even restricting body camera footage of arrests and disciplinary records from newspapers, such as the Albany Times Union and the Schenectady Daily Gazette.

A repeal of this statute has been proposed over the years in the state legislature but is getting more attention again now.

The statue states that, “all personnel records used to evaluate performance toward continued employment or promotion … shall be considered confidential and not subject to inspection or review without the express written consent of such police officer … except as may be mandated by lawful court order.”

Senate and Assembly Democrats met Monday to talk about a legislative package addressing the past week of protests and violence, according to Senate Majority Leader Andrea Stewart-Cousins and Assembly Speaker Carl Heastie, both of whom said in a statement that they planned to take action soon.

Stec said he wants to see the Democrats address this in a bill he can look at.

“Make the argument; show me how we’re going to do it,” Stec said. “And let’s find a way to do that while still protecting the rest of law enforcement.”

Little said the legislature can be called back into session at any time now and could convene by videoconference.

“Certainly there are systemic changes that can take place,” Jones said. “I also don’t want to say that every police officer or every person in law enforcement carries out these heinous acts or thinks that way. That’s certainly not the case. We should have a dialogue with law enforcement and community members and leaders in that community to work on this.

“This is an issue that wasn’t brought up five days or seven days ago and it’s not going to go away unless we really look at it and concentrate on what the issues are surrounding this.”

Little, Stec and Jones each said they support the protestors’ cause and freedom of speech, but they said they don’t believe looting and burning or breaking property is the way to go about protesting.

“I understand why people are angry and upset and mad,” Jones said. “I don’t believe violence and looting your own community is the answer, either. Peaceful protest I’m all for. What we’re doing to our communities in this country by basically wrecking them is not the solution, either.”

“Like nearly every American, I was horrified by the video footage of George Floyd’s death,” Stec said. “Mr. Floyd’s memory and his family deserve justice, not violent protests and looting done in his name. That’s not justice; that’s destruction that takes a bad situation and makes it even worse.”

He said looting is no way to gain sympathy for a cause.

Little said she understands the peaceful protests over a killing she called “unethical and unjust,” but it does not give people privilege to break into a store.

She said she was also seeing broad dislike for police at the protests.

“Who is going to want to be a policeman?” Little said.