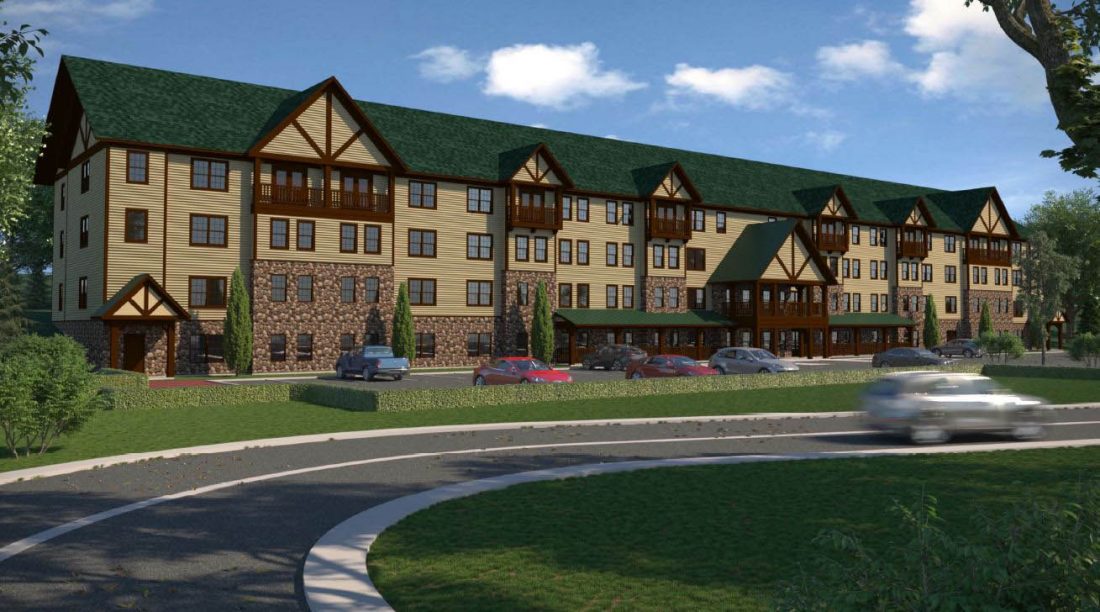 This image shows a conceptual rendering of a proposed affordable housing complex on Wesvalley Road that may be built by Regan Construction. M.J. Engineering and Land Surveying, out of Clifton Park, worked with the developer on this rendering. (Photo provided)

LAKE PLACID — The North Elba-Lake Placid Joint Review Board is seeking public comment on a rezoning application that could open the doors to building a new housing complex that is meant to be affordable, in a community where affordable housing has gotten harder to find.

The application, if approved by both the Review Board and the North Elba Town Council, would see a parcel of land on Wesvalley Road rezoned from “vacant commercial/village center” to “planned development.” That would pave the way for the construction of a 60-unit housing development — currently in the conceptual design phase — built by the Ardsley-based Regan Development Corporation.

A public hearing by videoconference is slated for Wednesday at 5:30 p.m.

The rezoning application was submitted by the current owners of the parcel, the Lussi family, doing business as Lake Placid Vacation Corp. The Lussis are longtime Lake Placid residents and owners of the Crowne Plaza Resort & Golf Club.

The Lussi family has offered to donate 5 acres of a nearly 16-acre property to Regan Development for this project. The property is located on Wesvalley Road, across the street from a lot used for overflow parking at the Ironman triathlon and events at the Olympic Center. It borders the Lake Placid village boundary, so in addition to the rezoning, the Lussis have requested that the property boundary be moved.

“We would like the entire area from the Crowne Plaza to Wesvalley Road rezoned to ‘Planned Development’ to support this project,” Arthur Lussi wrote in a project narrative submitted to the Review Board last month. “As of now the P-D line runs through the middle of the Crowne Plaza property along the village (of Lake Placid) and town line. We proposed to move the westerly boundary of the P-D line from the village/town line to Wesvalley Road. This area is served by existing village water, village sewer and village electric.”

A separate application submitted to the Review Board by Regan Development — which the board has discussed but not voted on yet — gives some insight into what the company plans to do with the parcel donated by the Lussi family.

The developer has proposed to build a 53,600-square-foot, 44-foot-tall apartment complex into the existing terrain: four stories in the front and three stories in the back, on a slope. The facade would have a river rock stone veneer, tan siding and a green roof, accented by timber.

The developer has proposed building 75 parking spaces and eight handicapped parking stalls for tenants — fewer than the 90 spaces required by the land use code. The Review Board would have to sign off to allow the complex to have fewer parking spaces.

State Sen. Betty Little, who helped bring together local officials and Regan Development owner Larry Regan on this project, said in March that the complex would likely include units affordable to those who make around 60% of the local area median income, a requirement of receiving funding from the state Division of Housing and Community Renewal. In Essex County as of 2018 (the latest year available), that would mean one person making up to $29,220 per year or two people making up to $33,360 per year, according to HCR.

In addition to seeking funding through HCR, the developer has requested a PILOT agreement if the project moves forward. PILOTs, or payments in lieu of taxes, can be negotiated to provide tax breaks to a developer working on a property that creates a public benefit. PILOTs could include either the limitation or deferment of property taxes owed.

The Lussi family’s corporation, Lake Placid Vacation Corp., paid a combined $3,530 in local and school taxes on its Wesvalley property last year, according to Essex County tax records. The property, nearly 16 acres in all, was last assessed at $276,700.

This development would also need approval from the state Department of Environmental Conservation and the Adirondack Park Agency before moving forward.

The first public indication that this housing complex was in the works came in March, before the New York on PAUSE order prompted widespread business closures and people staying home as much as possible.

Details about the preliminary talks also came to light six days after the town council signed an option agreement paving the way for a separate housing complex proposed at the former W. Alton Jones Cell Science Center. That housing complex, if it comes to fruition, is earmarked first for athlete housing for the 2023 World University Games. After the games, it would be used for residential housing.

Housing, and the lack of affordable options for it, has been a point of discussion within the community for years. Business owners often report issues with hiring and retaining staff due to the lack of affordable housing. The local school district has seen its enrollment decline in tandem with rising home values, and the community’s year-round population is declining. The 2020 census is expected to show a population decline in the town of North Elba of nearly 10%, or 891 residents, in the last 10 years. That’s the worst projected population decline in Essex County.

A recent housing needs assessment conducted by Saratoga-based consultants Camoin 310 pointed to the area’s short-term vacation rental boom not as the cause of the housing issue but as a factor exacerbating the severity of it.

The study showed that with a target of 50% of the local workforce living within the community, North Elba and Lake Placid have a need for roughly 1,534 “workforce and affordable level” housing units — the majority, 1,013 units, being for those who make less than $35,150 per year. In the study, affordable for that income range is defined as less than $879 per month for apartments and under $123,000 for a home.

The Joint Review Board is meeting remotely due to the novel coronavirus pandemic, so those who want to speak at the public hearing on the Lussi application can do so by joining the meeting on July 1 a few minutes before 5:30 p.m. via the teleconferencing software GoToMeeting, at https://global.gotomeeting.com/join/646460085.

A full copy of the rezoning application and supporting documents are available on the town website at “http://northelba.org”>northelba.org under the “Review Board” tab, listed as “Case #1082 — Lake Placid Vacation Corp.”