Next one is ‘The Goonies’ Thursday in Gabriels 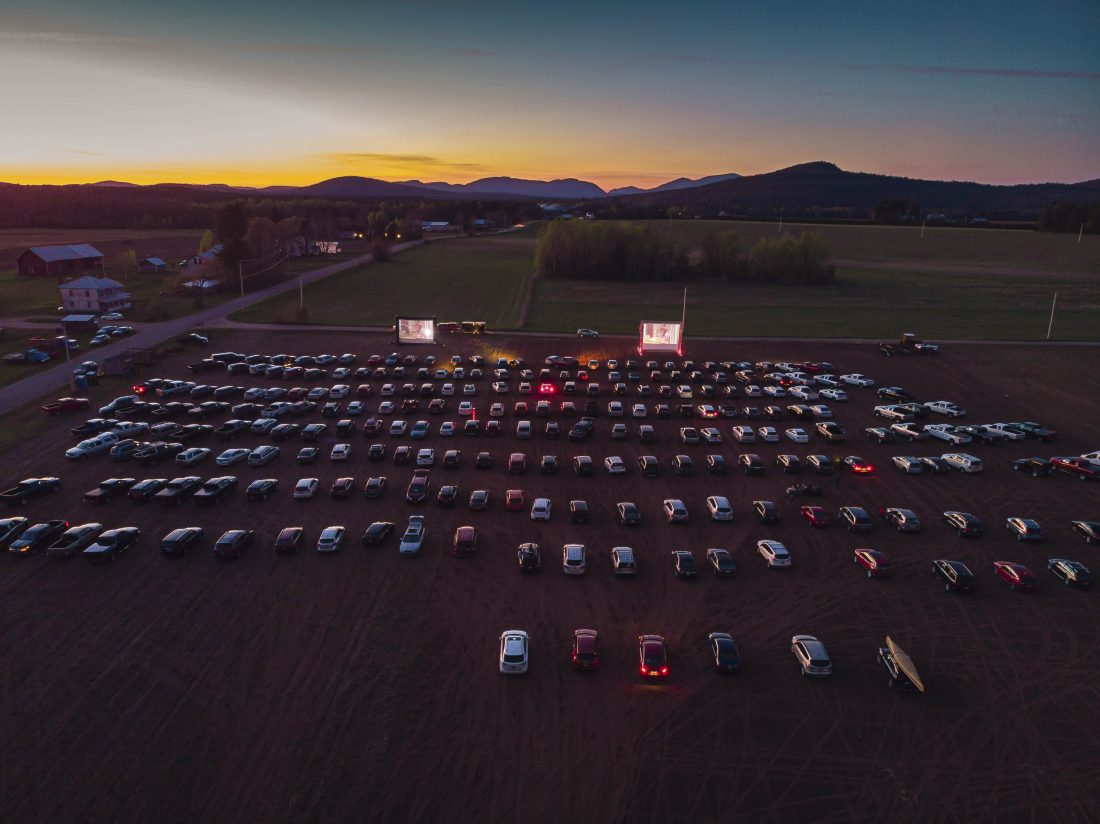 Cars and trucks are parked at Tucker Farms in Gabriels on May 21 for a drive-in movie screening of “Back to the Future,” organized by the farm and Good Guy Productions. (Provided photo — Jordan Craig)

LAKE PLACID — Eric Wilson of Good Guy Productions is riding the coattails of success after the May 21 pop-up drive-in movie showing of “Back to the Future” at Tucker Farms in Gabriels, and he is planning more drive-in movies around the North Country.

Good Guy Productions will be back at Tucker Farms Thursday, June 4 with a showing of “The Goonies” starting at 9 p.m. The Paul Smith’s College Booster Club will help with traffic control and concessions, and the suggested donation for admission is $10 per car. The gate opens at 8 p.m.

“Eric and I had this idea way back in April when all of this (stuff) hit the fan,” Williams said, referring to the closing of movie theaters and other non-essential businesses amid the coronavirus pandemic. “I called him up one day and said, ‘I want to do this drive-in movie idea.’ … It’s funny because he had just gotten off the phone with Tom Tucker, who had the exact same idea.”

The screenings will be as follows:

In order to offer free admission, Williams received donations from 27 Tri-Lakes businesses. A different community group will be involved at each event, providing volunteers for parking and traffic control, and accepting donations at the gate.

Originally, Williams and Wilson were looking to show the pop-up drive-in movies in parking lots, such as the one at Hannaford supermarket in Lake Placid.

“Based on the turnout from the first movie, we realized very quickly that we needed larger venues,” Williams said.

Wilson will also be organizing drive-in movies at the Clinton County Fairgrounds in Plattsburgh on two Saturdays, June 13 and 20, with a 9 p.m. start time. There will be an admission fee per car.

On May 27, Wilson posted on his Facebook page — The Big Screen Drive-In Movie — that film distributors were ceasing access to movies for pop-up drive-in services on June 14. The companies, Swank Motion Pictures and Centurion, said they would not rent films to Wilson when movie theaters open up. However, movie theaters are part of New York’s Phase 4 reopening of the economy, and the soonest they could open in the North Country would be June 26. So Wilson has at least until the end of the month. And because states are reopening their movie theaters at different times, the companies will work with pop-up drive-in vendors on a case-by-case basis.

Wilson is mainly known for providing sound, lighting and DJ services for a variety of events, including weddings, after-prom parties, graduations and opening ceremonies for sporting competitions such as the Empire State Winter Games in Lake Placid. But he’s found a niche in the pop-up drive-in movie, as long as he can do it. About 230 cars filled a Tucker Farms potato field on May 21 to watch “Back to the Future” on two portable screens.

When the coronavirus pandemic hit in mid-March, Wilson’s event calendar dried up, and he’s been living mainly on savings for the past two months. While the drive-in movie service is popular, he’s covering his expenses but not making any money yet.

“I’m getting rewarded in more ways than monetary,” Wilson said, adding that he’s received a lot of thank-you messages from people who attended the May 21 event. “It was probably one of the most rewarding jobs or events that I’ve ever been involved with. It was just such a cool event for people. They needed it so badly.”

He could potentially make a profit at the Plattsburgh events, as the tickets sales are split 50-50 with the venue, but the May 21 proceeds were donated to the Paul Smiths-Gabriels Volunteer Fire Department, and there will not be any proceeds for the events co-sponsored by the radio station.

People listen to the movie through the FM radios in their vehicles, and there are strict rules for people attending the events.

Portable toilets will be on hand for emergencies only.

For the latest information, including the titles of the movies to be shown, visit The Big Screen Drive-In Movie Facebook page.