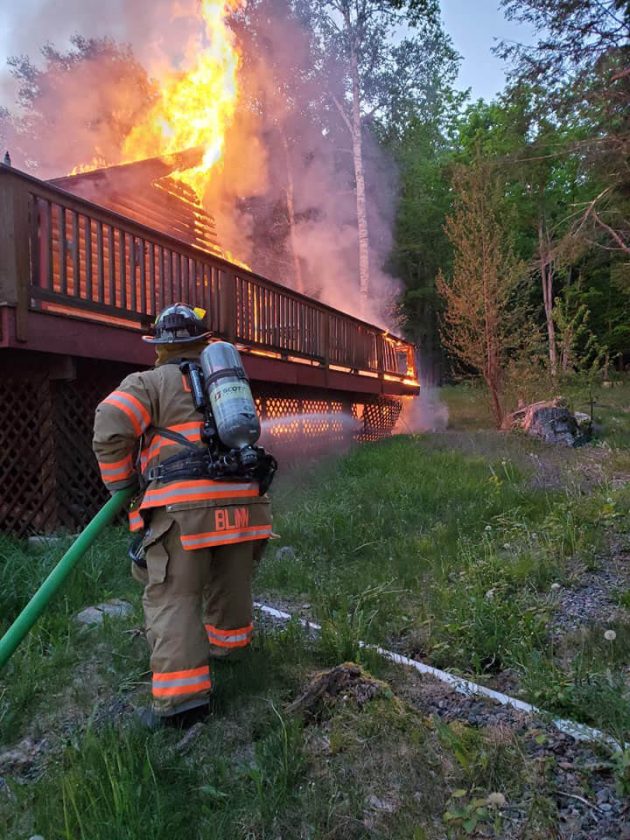 LAKE PLACID — A seasonal home on the shore of Lake Placid was destroyed by fire Friday evening.

The single-family camp was located on the east point of Moose Island. It was unoccupied when the property caught fire, according to Lake Placid Volunteer Fire Department Chief Douglas “Torry” Hoffman. No one was reported injured. The cause of the fire had not yet been determined as of Saturday.

The Lake Placid fire department was alerted to the fire at 7:58 p.m. Friday. Twenty-one members responded to the scene.

The department used the Lake Placid Marina as a staging area. Using boats the fire department had on hand, groups of firefighters approached the camp by water. When they arrived, they found that the east side of the building was engulfed in heavy smoke, according to Hoffman. Flames were coming out of the roof in the same area.

Boats were sent back to the Lake Placid Marina to pick up more firefighters and equipment. One boat used to transport equipment was a civilian’s, Hoffman said.

Firefighters drew water directly from the lake to tackle the blaze. They were able to prevent the fire from spreading and contain the flames to the interior of the home, according to Hoffman.

Hoffman described the state of the home as a “total loss.”

“I don’t think it’s going to be fixable,” he said.

“We believe it may have started in what was described to us as a storage area off of the kitchen, but we’re not exactly sure,” Hoffman added. “When we first arrived, there was heavy fire in the kitchen area that had vented through the roof.”

It was not immediately clear how the fire had started. Essex County fire investigators are investigating the cause.

The Lake Placid Volunteer Fire Department fought the blaze for hours alongside firefighters from other departments. The Lake Placid crew was back in service at 2:25 a.m. Saturday.

Hoffman thanked the civilians who helped out by providing a boat, as well as the people who brought food for the firefighters.

“It was an amazing response from our department and mutual aid departments,” Hoffman added. “It was really a community response.”

This was the second fire on the shore of Lake Placid this year. A camp on the west shore of Lake Placid, Camp Happy Hours, burned to the ground in April. The lake was still frozen at the time, and firefighters used an airboat from the Saranac Lake fire department to reach the blaze. In that case, firefighters were also on the scene for several hours, from shortly after 8 p.m. on April 5 to 3 a.m. on April 6.

ALBANY — New Yorkers are expected to get the most independent review to date of the thousands of COVID-19 deaths ...

As Congress negotiates the second stimulus package in Washington, local school districts are banking on an infusion ...