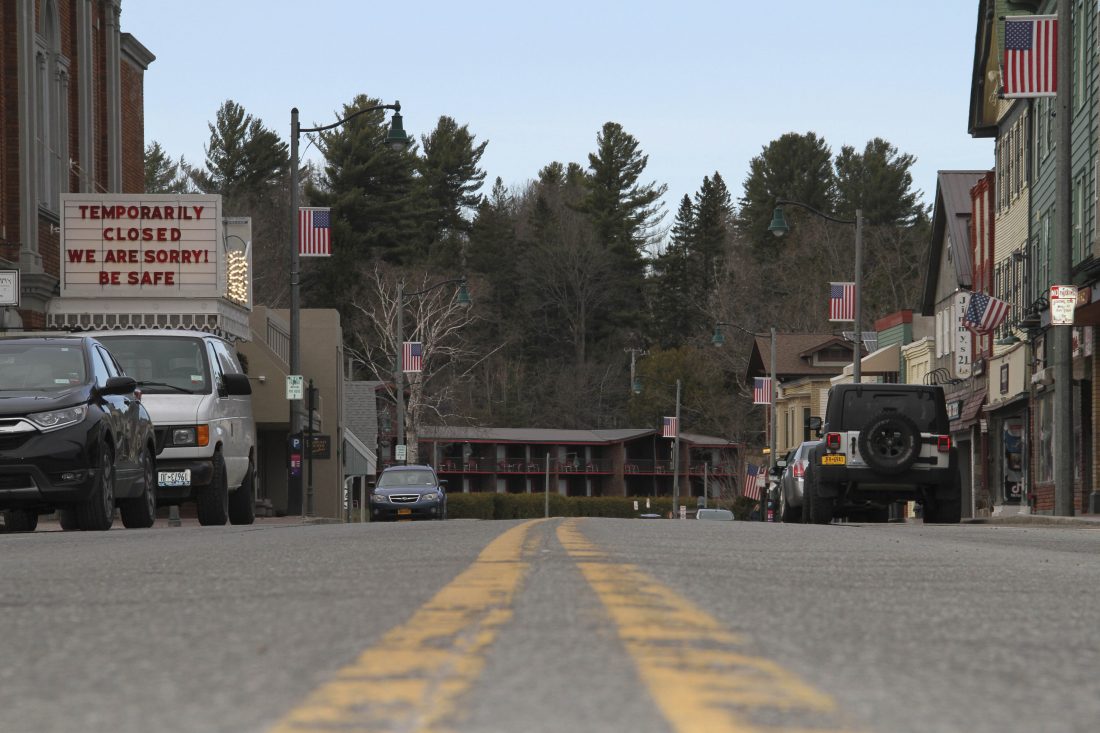 Main Street, Lake Placid, is quiet on April 7. The village board considered a proposal to close the right lane, on the Mirror Lake side, to automobiles and make the other lane one-way going away from the camera, at least for this July and August amid the COVID-19 pandemic and major construction planned for Main Street. The partial closure would make way for an expanded pedestrian experience to benefit restaurants and retail shops. (Enterprise photo — Andy Flynn)

LAKE PLACID — A proposal to shutter one lane of traffic on Main Street and convert it to an outdoor market and dining space was ultimately denied by the Lake Placid Village Board of Trustees on Monday.

The decision came after multiple residents spoke publicly, and reached out privately, to lawmakers with concerns over the impact of the proposal on traffic along Hillcrest Avenue, through a residential neighborhood, and Wesvalley Road. The vote represented a reversal of opinion by the board, which initially backed the idea.

The “Main Street Reimagined” plan was first proposed last month by Greg Borzilleri, the owner of Mirror Lake Boat Rental. It called for the northbound, lakeside lane of traffic to be blocked off for use by businesses. The state has directed restaurants and retail shops to limit capacity to 50% amid the coronavirus pandemic, effectively cutting down on the number of customers the businesses can serve during this area’s busiest tourism season. The outdoor seating was meant to expand that capacity.

But with traffic expected to turn one-way along Main Street, some traffic was going to be diverted onto Hillcrest and Wesvalley. For multiple residents of the Hillcrest neighborhood, that part of the plan didn’t sit right.

Residents of Hillcrest Avenue raised a few concerns about the Main Street proposal, most of them about traffic flow and safety.

“What has to be more deeply considered are some small changes that might mitigate the traffic issues,” Dylan Ratigan told the board on Monday. Ratigan’s mother lives on Hillcrest Avenue. He was a candidate for Congress in 2018 and former host of his own show on MSNBC.

He noted that Hillcrest doesn’t have a sidewalk, and there are already safety issues there.

“There’s a lot of speeding on Hillcrest, and there’s very little enforcement right now,” he said. “I know we can’t have speed bumps because of the weather, but maybe some sort of temporary speed bump or a traffic light. My fantasy would be a sidewalk, a speed limit and a speed bump.”

He also floated the idea of making Hillcrest a one-way street.

Despite his concerns, however, Ratigan said he was in favor of the Main Street proposal.

Resident Mary Nash expressed concern that during peak hours when Main Street is packed, the one-lane traffic could slow down the response time for the fire department to reach a building on Main Street. She also said lawmakers didn’t effectively communicate with residents and solicit feedback.

Heidi Roland, a longtime resident of Hillcrest, said the avenue is narrow as it is, and she echoed Ratigan’s concern that safety issues already exist there without the added traffic. Side-view mirrors on cars parked along the street have been swiped on numerous occasions outside her home, she said.

Roland also questioned a survey conducted by the Regional Office of Sustainable Tourism that has been cited by lawmakers and members of the Lake Placid Business Association. ROOST conducted a survey asking residents whether they would be in favor of the Main Street Reimagined idea. Of the 341 people who responded — the village of Lake Placid had a population of more than 2,500 in the last census — roughly 70% were in favor.

Roland said she spoke with her neighbors, and most of them hadn’t heard of the survey. Also, she said, the survey didn’t gather input about specific traffic flow plans.

“I don’t know how you would think that would ever be of importance for a public decision,” she told the board about the ROOST survey. “I don’t think it had anything to do with the direction or diversion of traffic. I would ask you to throw out the resident survey in your decision-making.”

Mary Jane Lawrence, chief of staff at ROOST and a resident of the greater Hillcrest neighborhood, conceded that most of those on ROOST’s mailing list own or manage businesses, and though the office has been trying to encourage members of the community to sign up, “it’s a work in progress.”

“I’m also a resident off of Hillcrest,” she told Roland, “I share your concerns as well. I share everybody’s concerns. My greatest concerns … are for the long-term health of our community. We see right now that there’s four empty stores (on Main Street), and we know that there’s more that are leaving.”

Lawrence said for some businesses, the summer season makes up 70% of their budgets, and reduced occupancy could be “fatal.” She said she thinks it’s worth taking a risk on creating a “much more vibrant Main Street than we would see under the current guidelines from New York state,” with the option of reversing the plan if it doesn’t work out.

Village Trustee Art Devlin noted that the infrastructure costs the village would have to shoulder could reach upward of $70,000, and it is unclear if Essex County would start up the Placid Xpress shuttle buses in time to help transport people.

Trustee Jason Leon voted to table the Main Street idea until residents’ concerns could be ironed out.

“In order to ask people to make a sacrifice, we should’ve asked them first,” he said. Leon said there was a “lot of internal discussion and skepticism and conversation” about the proposal, but “there seems to be a legitimate gripe that there wasn’t enough external discussion with residents.”

Leon said he doesn’t believe Lake Placid has seen the true economic impact of the virus yet — and that scares him.

By tabling the plan, Leon hoped to give the public more time to comment, and more time to see if support for the project would be reignited.

Ultimately, Leon’s motion to table didn’t gain traction. No one voted to second the motion and bring it to a vote.

Trustee Scott Monroe made a motion to “abolish” the plan, and that motion passed.

“We don’t have the time to do it right,” said Trustee Peter Holdereid, who owns a hotel and restaurant and commercial buildings on Main Street.