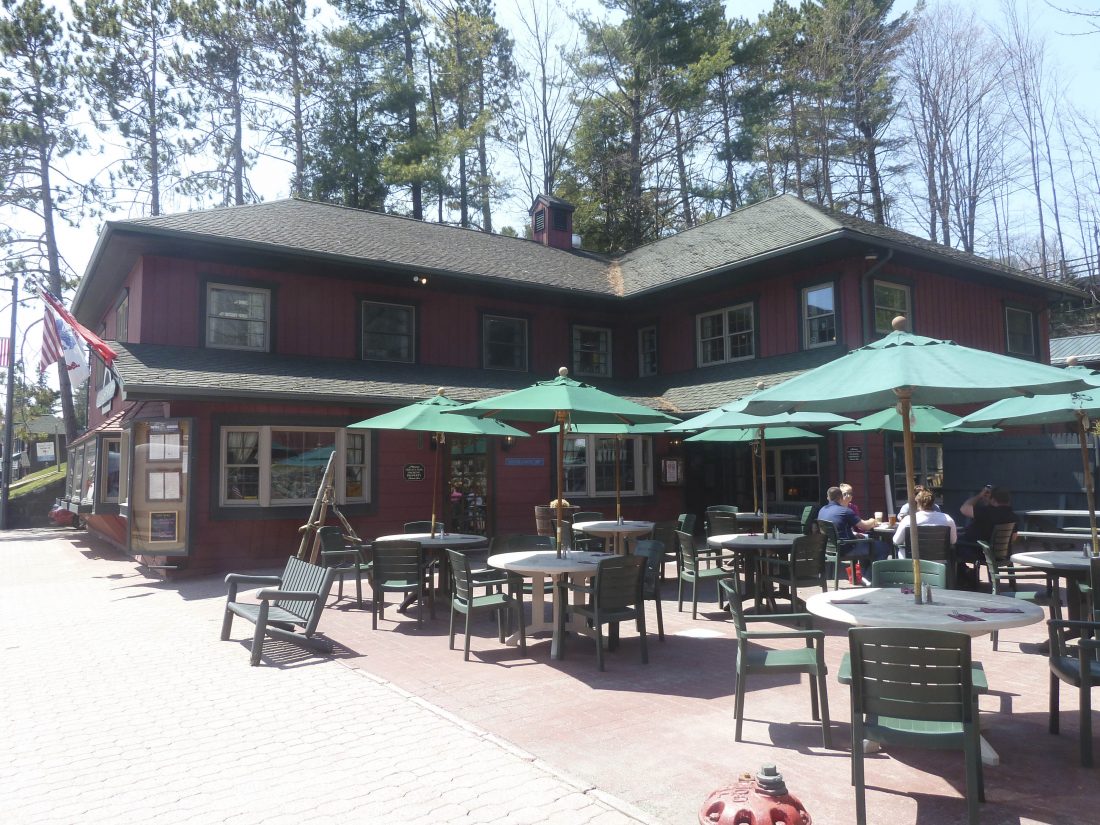 An outdoor dining area at Great Adirondack Brewing Company in Lake Placid is seen in May 2016. (Enterprise photo — Antonio Olivero)

Gov. Andrew Cuomo announced Wednesday that outdoor dining is now allowed in regions such as the North Country that have entered Phase 2 reopening.

The authorization, which takes effect today, comes with some caveats. Restaurant owners have to place outdoor tables at least 6 feet apart, all servers and staff are required to wear face coverings, and customers also have to wear face coverings if they’re not seated. Restaurants and bars that have outdoor seating areas already attached to their buildings are allowed to open them as long as customers can be seated at least 6 feet apart, according to the state Department of Health.

“COVID-19 is still a real threat and we’re still battling it,” Cuomo said in a statement. “I know it’s not on the front pages today, but it is still in people and in society.

“But thanks to the people of New York and the nurses, doctors and essential workers, today we have the lowest number of hospitalizations ever and we have the lowest death toll ever. We are continuously evaluating activities that can be safely reopened, and today we are adding outdoor seating at restaurants to phase two.”

Statewide, the number of new hospitalizations due to COVID-19 was 135 as of Wednesday, Cuomo announced during his daily press briefing. That’s the lowest number since March. The number of fatalities has also continued to decline statewide. There were 49 COVID-19 deaths reported on Wednesday.

In Franklin County, there were four known active cases of COVID-19 as of Wednesday and 72 people countywide in either precautionary quarantine or isolation — mostly connected to a nursing home employee who test positive, and then later tested negative. Essex County reported one active case of COVID-19 and six people in quarantine or isolation as of Wednesday. Neither county has reported a COVID-19 fatality.

The governor’s announcement came a week-and-a-half after the village of Saranac Lake’s plans to allow outdoor dining as part of a “soft start” were panned by state and county officials, who deemed the plan noncompliant with state guidance at the time. The region was still in Phase 1 reopening then. Village Mayor Clyde Rabideau and Manager John Sweeney could not immediately be reached for comment.

Andrew Quinn, owner of Desperados restaurant in Lake Placid, said Wednesday that he was surprised and shocked by Cuomo’s announcement, and that the governor didn’t give him enough time or guidance to open the following day.

“It would be nice to get a little time and regulations before we open,” Quinn said. “I have lots more questions than answers right now.”

Can a patron use a bathroom inside the restaurant? Does the staff have to take the temperature of all diners? Will his employees need to get tested for COVID-19?

For now, Quinn said he will first paint the picnic tables he just bought and set up outdoor dining for people ordering take-out — the restaurant is open for take-out five days a week — until he gets answers to all his questions.

“It might take a while to get all my X’s in a row,” Quinn said. “It will be very interesting to see how this plays out.”

Representatives of two Saranac Lake restaurants, Borracho Taco and Lakeview Deli, both said the announcement likely won’t change anything for their businesses.

Matt Sorensen, an employee at Lakeview Deli, said the business doesn’t plan on adding outdoor seating because it doesn’t have the systems in place: The deli doesn’t have any servers and doesn’t currently have a way to keep track of orders by table.

“We don’t really have a viable solution because we’re on a hill,” said Borracho Taco owner Ryan Davis. “We’ll probably continue to do curbside service until we’re allowed to reopen fully.”

Rob Kane, owner of the Great Adirondack Brewing Company in Lake Placid, said Wednesday that the governor should have made the outdoor dining decision weeks ago.

“He’s flying by the seat of his pants,” Kane said. “This (New York State on PAUSE order) has left a lot of small business people in danger of going out of business.”

The Great Adirondack Brewing Company has been offering take-out meals on weekends, and Kane said staff will open its outdoor dining section as soon as possible.

“We’re scrambling to get open,” he said.

Still, seating diners at limited capacity is not good for business, Kane said. He added that “the fixed costs don’t go away.” To do business, his staff is turning a dining room into a market where people can buy meals to go and local products.