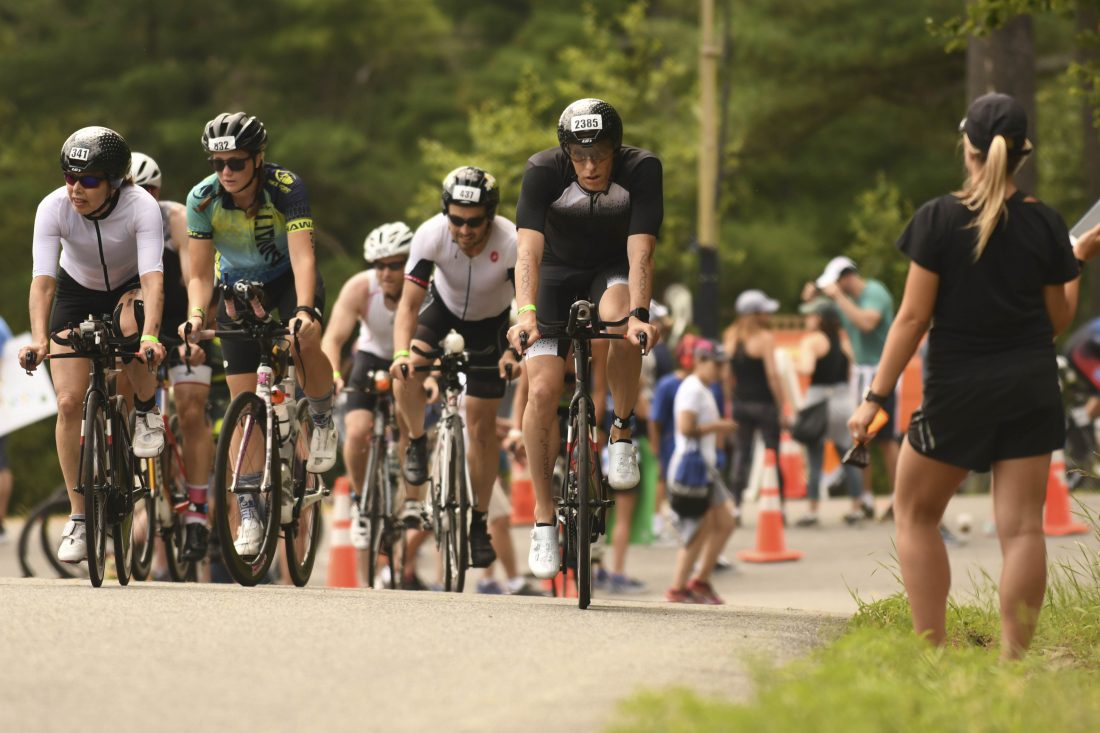 A slew of bikers turn onto Northwood Drive amid crowds of spectators during the Ironman Lake Placid triathlon in July 2019. (Enterprise photo — Lou Reuter)

LAKE PLACID — The big summer events in this village will not go on as planned, local officials decided Wednesday.

Regional Office of Sustainable Tourism CEO Jim McKenna confirmed Wednesday afternoon that the Fourth of July fireworks in Lake Placid, Ironman Lake Placid triathlon, Ironman 70.3 triathlon, Summit lacrosse tournaments in August and Lake Placid Marathon and Half were canceled this summer, due to the coronavirus pandemic. Can-Am Rugby officials also confirmed Wednesday that their tournament has been canceled for this year.

“This is based on a number of decisions,” McKenna said: “the governor’s latest announcement limiting travel from state’s that are spiking, that they have to quarantine; all the metrics; the resident sentiment; and our responsibility to guard our communities. Public health is the number-one responsibility that we all have.”

Wednesday’s decision was influenced by Gov. Andrew Cuomo’s announcement the same day that New York, New Jersey and Connecticut will require visitors from nine states with COVID-19 spikes to quarantine for 14 days upon arrival, beginning Thursday. But McKenna said it wasn’t the deciding factor.

“I think we were all pretty close to this decision today regardless,” he said.

Village Mayor Craig Randall, town of North Elba Supervisor Jay Rand and ROOST Chief of Staff Mary Jane Lawrence were on the phone call when McKenna confirmed the cancellations and were all part of the decision-making process. Even if the events received state approval, they would then need county approval and finally local government approval.

“Tomorrow there’s another events conference call, and I think we’re feeling compelled to not take any more time on these issues,” Randall said.

“Seemingly this was becoming more and more inevitable with restrictions on distancing, etc.,” Rand said.

Asked about Ironman before the cancellation, Essex County Board of Supervisors Chairman Shaun Gillilland — a member of the North Country’s “Regional Control Room — said large gatherings are not part of the state’s four phases of reopening the economy. The governor announced Wednesday that the North Country would be going into Phase 4 of reopening on Friday, but that doesn’t change the state’s 25-person limit on gatherings.

“Each type of those activities will be individually evaluated by the state,” said Gillilland, R-Willsboro. “They rescheduled the date, but that doesn’t mean it’s going to happen.”

On Friday, June 19, Ironman Lake Placid officials announced its new tentative date for the race — originally scheduled for July 26 — would be Aug. 30.

Speaking for himself, Gillilland added, “I think they should kick it to 2021 like all kinds of other events nationwide. … You’re talking 10,000 people grouping together, in close proximity. All you’re doing is asking for an epidemiological vector. The virus isn’t beaten. We may have to contained, but it’s not defeated.”

The Control Room is expected to continue working beyond the state’s four phases of reopening.

“We’ll be continuing to monitor and evaluate, and hopefully we won’t have to shut down again,” Gillilland said. “We’re seeing states around the country reversing their reopenings. We want to avoid that at all costs.”

The announcement that Ironman had been tentatively rescheduled to August met immediate backlash on social media, both from residents and some out-of-town athletes.

“This is insanity,” wrote Lake Placid resident and longtime Ironman volunteer Amanda Cash. “I have supported Ironman for years as a community member and volunteer. And I am shocked that you are trying to hold this race, when other large events all over the country have been canceled altogether for 2020. This seems like a really, really unwise and selfish decision by Ironman leadership. Where is the plan detailing how you actually plan to hold this race with proper safety precautions in place? (Spoiler alert: I don’t believe it can be done safely at all, for volunteers, athletes, or spectators.) Sorry Ironman, but I’m out as a volunteer this year. And I know many other local volunteers who feel the same. Good luck!”

“If by some miracle this event does happen locals will not be welcoming,” wrote Lake Placid resident Christina Karl. “It will be a last minute, unplanned inconvenience. On top of a pandemic.”

Brian Viveiros, a triathlete from Canada, said there wouldn’t be enough time to train for Ironman Lake Placid this year.

“Seems to always be a lot of discussions behind the scenes, but is anyone asking what athletes want?” Viveiros wrote. “We’ve run out of time for any proper racing this year. (Ironman) should just accept where the world is at, offer refunds and deferrals now so we can all move on.”

“I just don’t know what athletes are supposed to do with this ‘tentative’ rescheduling just one month after we had to cancel all reservations, flights, etc for the original race date,” she wrote. “I get what a pickle Ironman has been in this year and I’m going to continue to be loyal and supportive, but this seems way too wacky and not plausible. Maybe they will use it as a return to racing test run with minimal athletes? They have to know they are giving people heart palpitations by not including info about deferring to 2021.”

Wilmington town Supervisor Roy Holzer said, before the cancellation was confirmed, that his town planned to honor its commitment to let the Ironman go through.

“It comes down to if New York state will allow it, as far as I see it,” Holzer said. “It doesn’t take a rocket scientist to drive around and see how hard-hit, financially, this region has been.”

Holzer said he thinks it’s time to get businesses back open, as long as the area’s coronavirus numbers don’t rise.

The triathlon route also goes through the town of Keene. On Tuesday, the Keene Town Council — out of concern for the health of residents — prohibited all events on town property, apart from a weekly farmers market. Town Supervisor Joe Pete Wilson Jr. said Wednesday, before the Ironman cancellation, that he shared residents’ concerns about the safety of the event, but he wasn’t alarmed after hearing about the tentative August target date. He said it was far enough away that there’s time to evaluate the risks.

“By August, we’ll either be in a better place health-wise or things will have deteriorated,” Wilson said. “It’ll be easier to make a well-informed, good decision as we get closer.”

In past years, the Fourth of July would be an all-day affair for residents and visitors in Lake Placid. Participants in the I Love New York Horse Show would attend, there would be a festive parade featuring floats and local children on decorated bicycles, and the fireworks at dusk would be orchestrated to music broadcast on the Lake Placid radio station.

Things are much different this year with the pandemic. Both Lake Placid Horse Shows were already canceled, as was the traditional parade. McKenna said his office may still be planning some kind of scaled-down, socially distanced celebration, but no details were available Wednesday.

Visitors from states with coronavirus infection rates over a set level will have to quarantine for two weeks upon arrival in New York, Cuomo said. As of Wednesday, nine states were over that threshold: Alabama, Arkansas, Arizona, Florida, North Carolina, South Carolina, Washington, Utah and Texas.

What was presented as a “travel advisory” affects three adjacent states that, over time, were able to check the spread of the virus this spring as New York City became a hot spot for the pandemic.

Cuomo’s announcement came the same day the New York City Marathon, scheduled for Nov. 1, was canceled because of the coronavirus pandemic. New York Road Runners announced the cancellation of the world’s largest marathon after coordinating with the mayor’s office and deciding the race posed too many health and safety concerns for runners, volunteers, spectators and others.

Last month, the Boston Marathon was canceled for the first time in its 124-year history, and organizers announced a virtual event would be held instead, with participants who verify that they ran 26.2 miles (42.2 km) on their own receiving a finisher’s medal.

The Associated Press contributed to this report.