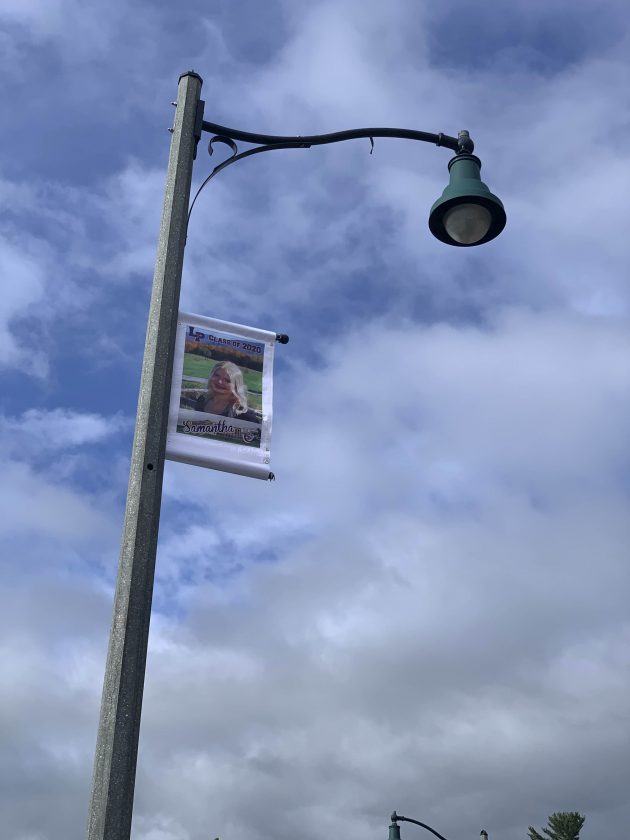 LAKE PLACID — Just when people thought high school seniors may get robbed of their end-of-the-year memories due to social distancing mandates from the coronavirus pandemic, the Class of 2020 may actually make more lasting memories than previous generations.

Obviously, social events have been canceled since the schools closed and students began distance learning on March 16. There was no prom this year. There will not be any in-person awards ceremonies. The Lake Placid High School Alumni Association canceled its banquet. The spring sports season vanished. Students haven’t mingled or played with their friends in almost three months, and they will not participate in end-of-the-year school traditions.

So they are making new ones.

For example, the 45 Lake Placid High School seniors now have their faces on banners attached to Main Street light poles. Seniors from Wilmington — nine from LPHS and four from AuSable Valley High School — have their own banners along utility poles on state Route 86, from the four corners to the Little Supermarket in Wilmington. All the banners were installed Monday.

“Normally we would be recognizing our seniors in all sorts of different ways in person, and we’re not able to do that this year,” LPHS Principal Tammy Casey said Tuesday. “So we’re hoping that making their faces visible in the towns that they live in will give them that recognition, at least try to in the best way that we can.”

The project was organized by LPHS library teaching assistant Patti McConvey, who lives in Wilmington. On April 19, she was tagged on Facebook by a friend who had seen a similar banner project in the city of Wishek, North Dakota. Her friend’s words: “I think we should.” McConvey agreed.

After researching the project, getting images from the schools, meeting with the appropriate officials at the village of Lake Placid and town of Wilmington and receiving designs from a local company — Wicked Signs & Graphics in Bloomingdale — she sat down the morning of Saturday, April 25. She was in one chair, her daughter Emily in another, and logged on to Facebook. She posted a plea to her friends for donations to pay for the banners.

Three hours later, she had raised more than $1,700, and the project was fully funded.

“We accepted 50 people’s donations, but we turned away probably another 40,” McConvey said. “The faculty and the staff were just unbelievable how they came out in minutes.”

Chalk this project up to Gov. Andrew Cuomo’s idea of “build back better” — not getting back to normal after the pandemic but improving the way we work and live.

“I think we started something,” McConvey said. “I wouldn’t be surprised if this particular thing goes on and on. I would hope so.”

Faculty and staff were expected to begin dropping off graduation “goody bags” and lawn signs to LPHS seniors on Thursday and some of the Lake Placid schools’ new traditions will begin next week; the last day of instruction will be Friday, June 12.

“While we are still maintaining traditions, our end-of-year celebrations have been modified to accommodate the current COVID-19 crisis,” stated a press release.

Students in grade 8, for example, will celebrate moving from the middle school to the high school on Wednesday, June 10. Faculty and staff will deliver celebration boxes to students during the day, and they will celebrate with a virtual celebration at 6 p.m.

“This year has presented some challenges, including the planning of the Class of 2020’s graduation ceremony, but there is nothing that Bomber Pride can’t overcome!” a press release stated.

The seniors will celebrate their final school days at 2 p.m. June 12 with a parade around the village. They will meet at the North Elba Show Grounds, drive up Sentinel Road and continue along Main Street to Saranac Avenue.

“We hope that everyone in the community will make signs, dress up, make noise, and get out and cheer them on,” stated a press release.

Traditionally, the LPHS commencement ceremony is held outdoors at the Olympic Speedskating Oval in front of the middle/high school. That will not change this year, but seniors will not be able to sit together, and their families will not be able to gather as a collective audience. Instead, there will be a drive-in style graduation ceremony in front of the school. Families will be in their vehicles.

“We’re trying really hard to maintain as much of the traditional ceremony as we possibly can,” Casey said. “We are going to call one senior up at a time, so that they can cross the stage, get their diploma, play ‘Pomp and Circumstance’ and cheer them on. They can watch each other graduate, celebrate with each other, but still maintaining all the social distancing guidelines.”

Graduation is set for 7:30 p.m. Friday, June 26. People will be able to watch it live online. A link on the school district’s website, www.lpcsd.org, will be posted on the day of the ceremony.

“Normally during the end of the school year, most teachers and students are practicing graduation songs, making caps out of construction paper, signing diplomas, and so much more,” LPES kindergarten teacher Megann Monahan wrote in an email. “Unfortunately, this year has been completely different.”

In order to acknowledge the students’ hard work and accomplishments, she said, the Lake Placid kindergarten classes will hold a graduation parade along Main Street and around Mirror Lake starting at 1 p.m. Monday, June 8.

The parade will be led by Lake Placid police, fire and ambulance service vehicles, and students will follow in their families’ cars. Residents are being asked to line the sidewalks “with signs and lots of cheers” and practice social distancing guidelines.