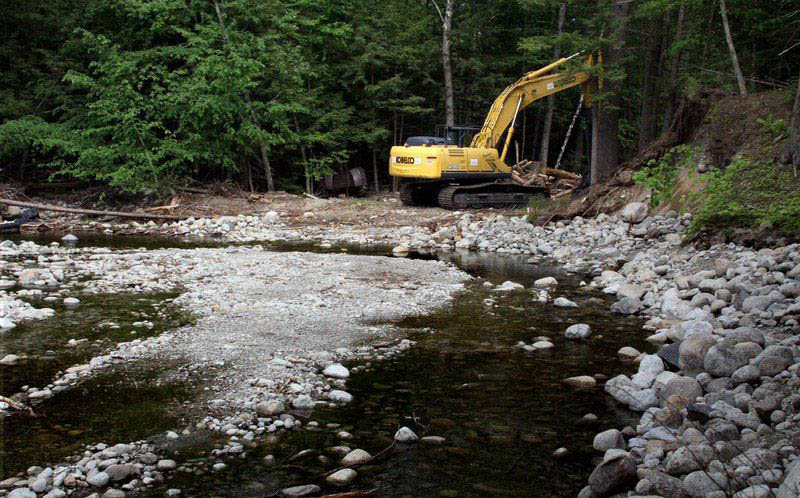 An excavator stands idle along the banks of Roaring Brook near Elizabethtown due to a work stoppage. During Tropical Storm Irene in August 2011, the brook cascaded through the channel and undercut its banks, which in some cases rose approximately 20 feet above the bed. (Provided photo — Alvin Reiner, Press-Republican)

ELIZABETHTOWN — As its name implies, Roaring Brook, located 4 miles south of Elizabethtown, can at times be turbulent, with the narrow channel cutting away at the steep banks.

During Tropical Storm Irene in 2011, the brook cascaded through its channel, undercutting its banks, which in some cases rose approximately 20 feet above the bed.

In one instance, a room of the home of Marlee Pinter and her son Richard, tumbled into the volatile current and was washed away.

The “Halloween Storm” of 2019, though not as violent as Irene, once again reminded North Country residents of the power of water.

Turbulence of another sort has returned to Roaring Brook, as the town of Elizabethtown had plans to clear the channel of suspected impediments before the next major event. Apparently, the proper channels to do the work had not been navigated correctly.

According to Elizabethtown town Supervisor Noel Merrihew, the rationale to work on the waterway was for “infrastructure protection,” mainly to protect the road which parallels the stream, by mitigating the potential problems which could occur due to trees which have fallen into the brook at over a dozen locations.

“Someone called the DEC (state Department of Environmental Conservation) because we did not have the proper permit,” said Merrihew.

“I have met with the DEC, USDA (U.S. Department of Agriculture) and (Essex County) Soil and Water. This was under the Emergency Management Protection Plan. We are now waiting for an engineer, which the DEC requires. This may take 30 to 60 days.”

The cost of the project is covered by the Federal Emergency Management Agency and a New York state commitment, as well as in-kind reciprocation in the form of the Elizabethtown Public Works Department providing equipment and personnel, according to Merrihew.

“I had told them I have a state of emergency but was informed this does not allow us to go into the waterway.”

Merrihew also indicated the problems caused by the COVID-19 pandemic have not allowed agencies to meet and formalize plans as easily as has been done in the past.

An email received from DEC Region 5 Information Officer David Mitchell states, “During the week of May 18, DEC staff observed heavy equipment operating in Roaring Brook along Roaring Brook Lane in the town of Elizabethtown, and determined that no permits had been issued for this activity.

“DEC advised the town and its contractor to discontinue further work until the necessary permitting had been completed. DEC is encouraging the town to work with the Essex County Soil & Water District to develop a plan for the proposed work in the brook and to apply for the required permit to undertake the work.”