Griffin Smith, 18, poses with Lucy the dog in front of his workplace, Adirondack Lakes and Trails Outfitters in Saranac Lake, which his family owns. Retail stores like ALTO’s outdoor gear shop can now reopen to customers, albeit with restrictions to slow the spread of the coronavirus. (Enterprise photo — Lou Reuter)

Jessie Fischer, owner of the Book Nook in Saranac Lake, now can allow four customers in her bookstore at a time. She is seen Thursday. (Enterprise photo — Lou Reuter) 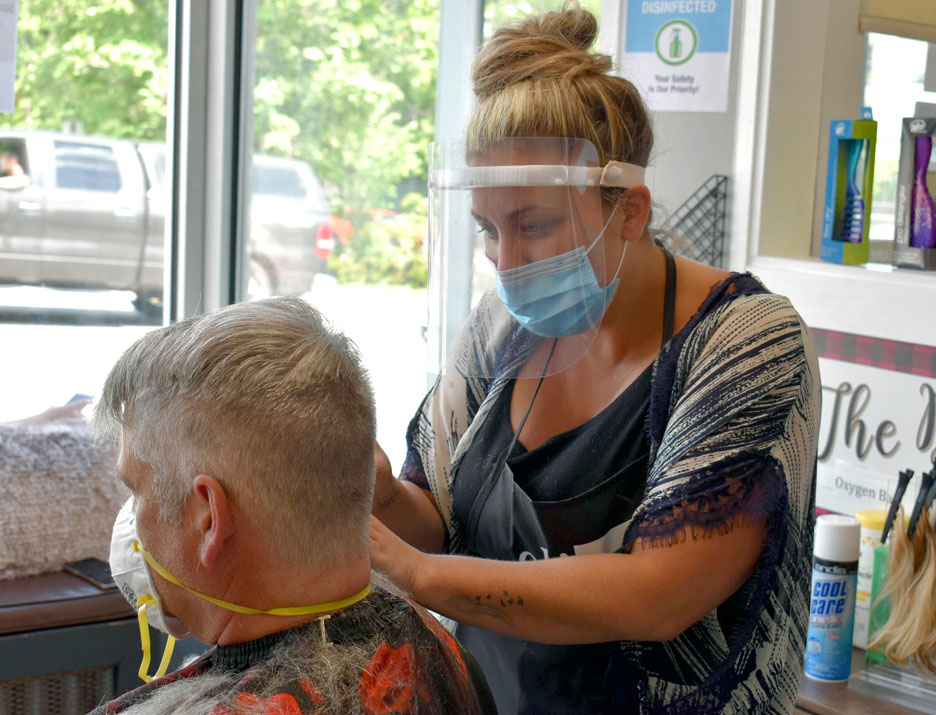 The North Country region entered Phase 2 of reopening more than one week ago. In the days since, some business owners have seen pent-up demand unleashed all at once, and an onslaught of customers seeking services. Others are wondering whether they’ll be able to sell their inventory and stay in business long-term.

Phase 2 has allowed owners of hair salons and barber shops, office-based jobs such as insurance and financial services, real estate and rental leasing agencies, and some in-store retail shops to begin the process of restarting their businesses, albeit under new guidelines. Dentists were also given the OK to open this month, and the state recently announced that restaurants would be allowed to offer outdoor dining, too.

But for some businesses, reopening hasn’t been as simple as turning a lock and opening the door again. 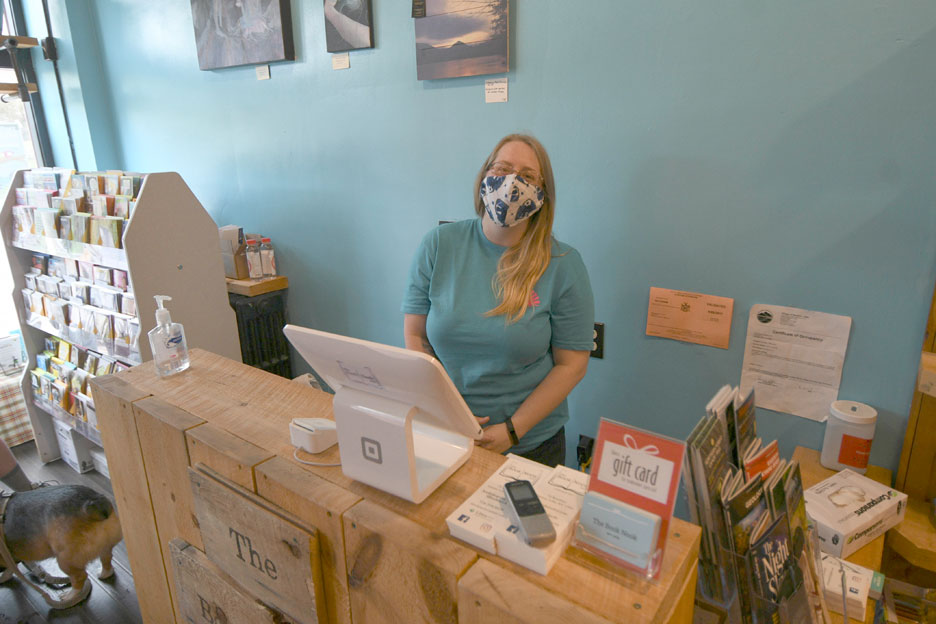 Jessie Fischer, owner of the Book Nook in Saranac Lake, now can allow four customers in her bookstore at a time. She is seen Thursday. (Enterprise photo — Lou Reuter)

Unable to generate income for months, some business owners are struggling with payroll costs. Some are wondering if they should bring back their employees at all right now. With the federal government’s $600-weekly unemployment benefit for those out of work due to the coronavirus pandemic, many of them making more on unemployment than they would working full-time. Others are struggling to get employees to come back to work at all.

“Our employees are making more on unemployment. I don’t want to hurt them. They’re like family,” said Cathy Johnston, co-owner of Ruthie’s Run in Lake Placid.

Ruthie’s Run is a sportswear and ski-wear shop that has roots dating back to 1926. It was the first ski shop to open in Lake Placid and one of the longest-running businesses on Main Street. Its building at 2415 Main St., which has housed the store since 1968, has been put up for sale.

“I’m really concerned,” Johnston said. “I have no idea yet, no feel for what the summer will be like. Will I get rid of all of this inventory I have left over from spring and winter? A little bit of our spring and summer merchandise has been canceled, but we had to book our fall inventory back in January. All of my inventory will start shipping in July and August for winter, and it’s already on order. But I have no idea if we’ll see the same traffic.”

Ruthie’s Run has been able to process online sales, but Johnston said the brick-and-mortar store hasn’t been able to generate any revenue for three months. Though the store is now open for limited hours — 11 a.m. to 4 p.m. every day but Sunday, when it is closed — the street is quieter than usual, and there hasn’t been a rush of foot traffic, according to Johnston. 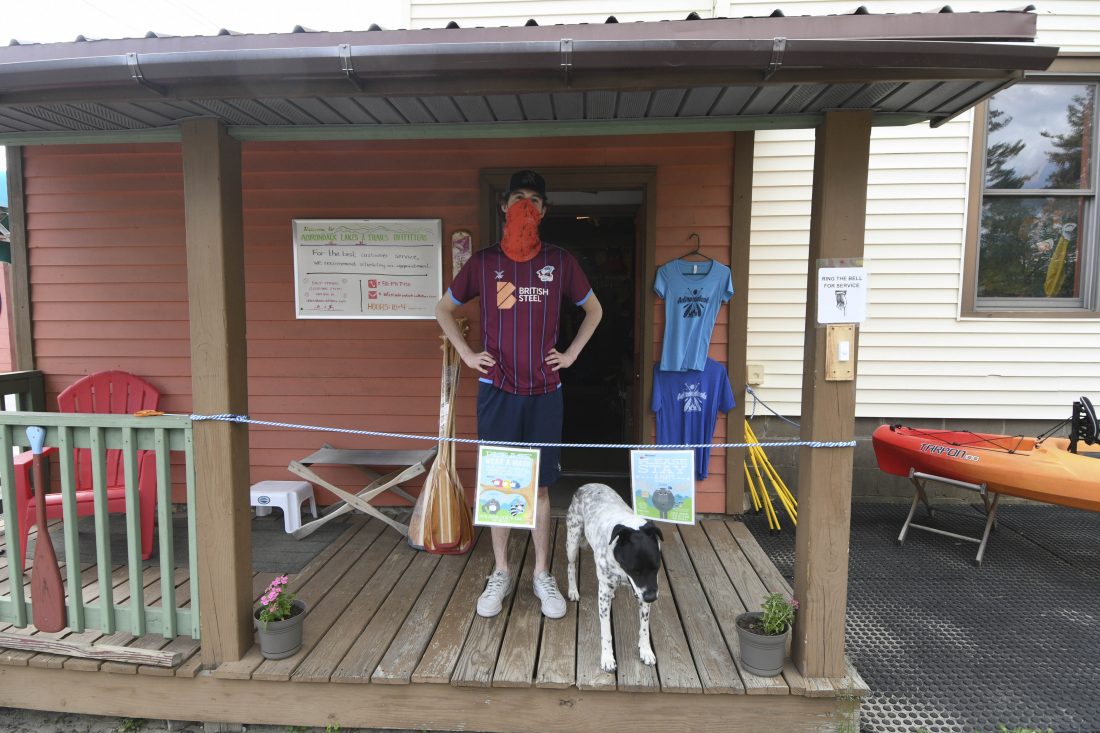 Griffin Smith, 18, poses with Lucy the dog in front of his workplace, Adirondack Lakes and Trails Outfitters in Saranac Lake, which his family owns. Retail stores like ALTO's outdoor gear shop can now reopen to customers, albeit with restrictions to slow the spread of the coronavirus. (Enterprise photo — Lou Reuter)

“I’m probably about even for June so far, but I think we’ve seen fewer people,” she said. “The street seems very quiet. There’s not much traffic in the store yet at all.”

Under the Phase 2 guidelines, retail stores can only have 50% occupancy at all times. Employees have to wear face masks when interacting with others, and businesses are allowed to turn away customers who aren’t wearing masks. Curbside pickup is encouraged where possible.

Ruthie’s Run is open for a limited number of customers at a time, and is also offering curbside pickup and online ordering. There are markers on the floor to promote social distancing, and hand sanitizer and disposable masks are available for those who need them, according to Johnston.

Cabin Fever, a Tupper Lake gift shop that doubles as a floral shop, has been able to stay open throughout the pandemic. Owner Anne Hoag said that’s because she has an agricultural license through her flower business, and agriculture was considered an essential service.

She said she has been able to do plenty of deliveries and curbside pickups of her arrangements.

“It’s nice because I’m able to do deliveries to cheer people up,” Hoag said.

However, she has looked forward to people being able and feeling comfortable to walk around and browse inside her gift shop.

Hoag also has a tuxedo rental business. She said flowers and tuxedos have dropped in demand. High schools were canceled, and many couples are rescheduling their weddings or postponing the receptions.

Mother’s Day this year was a big event, she said, as many people felt helpless being separated from their mothers and were sending lots of arrangement deliveries.

She hasn’t laid off any employees because she’s usually the only one working there, but said she hopes to hire some help as reopening continues.

Though real estate agencies have been allowed to conduct business remotely for some time, Phase 2 allowed agents to start showing properties in person, with some restrictions.

He said there are rules that the seller cannot be on site, everyone must wear a mask, and only two interested parties can see the house at once, but people have enjoyed being able to attend showings again. He also said the realty offices screen people before showings, asking them several questions about possible exposure to COVID-19 before they can see a house.

While the number of real estate listings has dropped dramatically across the state due to the pandemic — the number of new listings and pending sales both fell in April by more than 65% statewide, according to the New York State Association of Realtors — in the Adirondacks, the seasonal nature of the real estate market has held firm despite the market turbulence caused by the coronavirus.

LaValley said there is actually a “log jam of buyers” waiting looking for homes at all price levels in the area. Many sellers have been hesitant to list their properties during a pandemic, but he’s seen a constant stream of interested buyers — especially from out of the area.

This echoes a similar trend real estate agencies saw after the terrorist attacks on Sept. 11, 2001, when the Adirondacks saw a rush of interested home buyers as people in the city sought solace and safety in rural areas.

On Friday afternoon in Lake Placid, there were a few dozen people milling around Main Street. There were groups of people on motorcycles chatting on the curb, and families walking around Mid’s Park.

Many people weren’t wearing masks while walking around, though some were carrying them in their hands or wearing them around their necks.

Most stores that were open had signs on their doors indicating that customers were required to wear masks to enter. Others — such as Starbucks and A Pinch or A Pound candy shop — had tables or signs out front, with employees interacting with customers on the sidewalk rather than inside the stores.

Though the street appeared quiet, compared to the level of traffic seen at this time of year in years past, some businesses were contending with pent-up demand.

At Norm’s Plus barbershop and hair salon, the return of customers was immediate.

Norm’s co-owner Sarah Poirier said the business reopened on Monday, and the appointments have kept piling up.

“Monday was insane,” she said. “Everybody wanted a haircut.”

Hairstylists are required to get tested for COVID-19 every two weeks under the Phase 2 guidelines, and barbershops and hair salons can only be open by appointment and at 50% occupancy maximum. Those businesses can be open for hair services only; massages, hair removal and nail care are prohibited. Anyone getting one’s hair cut must wear a mask at all times. Shop owners are required to keep logs of customers that can be handed over to public health officials if contact tracing is necessary.

Norm’s Plus, though busy, was following all of the guidelines on Friday afternoon. Just four people were inside the salon, two customers and two hairstylists, with a receptionist stationed outside on the sidewalk.

Despite the restrictions on the number of people in the shop at one time, the number of customers Norm’s has seen in the last few days has eclipsed the number it saw at this time last year, according to Poirier. And with hairstylists deemed non-essential for months, there’s a lot more hair to be cut.

“Everybody’s going to be on the same hair schedule, I think,” Poirier said. “It’s crazy.”