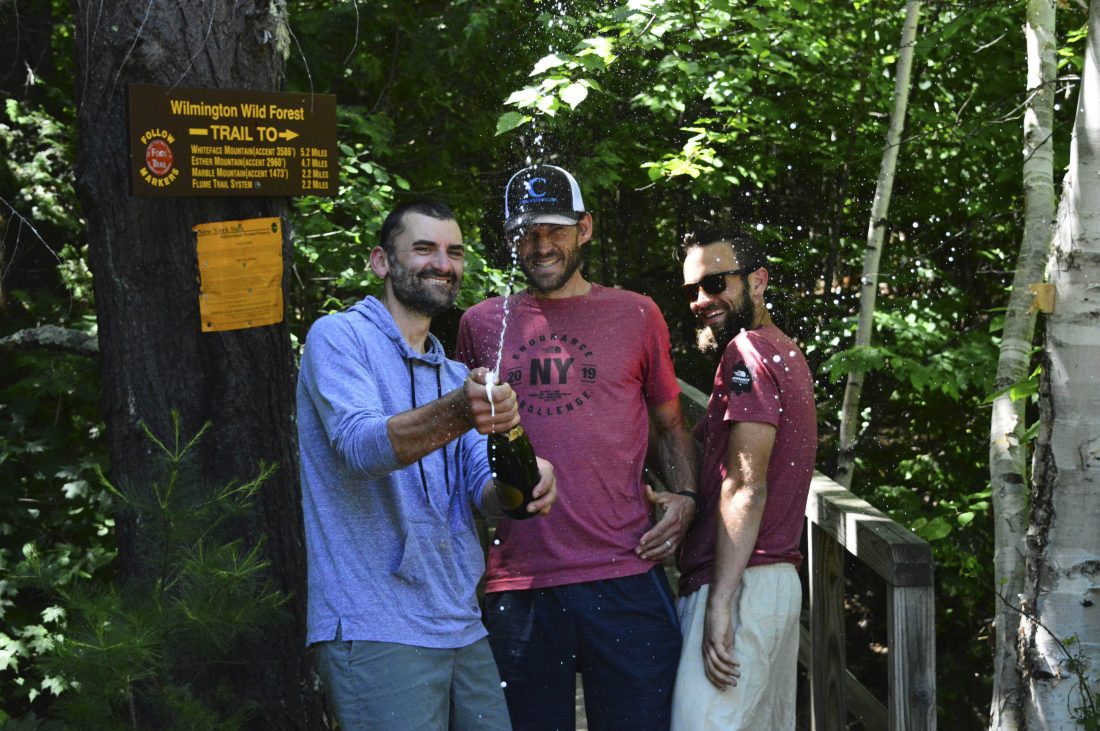 WILMINGTON — When cousins Mike Jaworski, Dan Fronhofer and Paul Fronhofer came out of the woods at the Esther Mountain trailhead Thursday, they were drained.

They had not slept in over 24 hours, they had eaten all but a smidgen of their food, and they had hiked all 46 High Peaks in six days, five hours and 36 minutes — a new record.

The previous official record was set in July 2019 by SUNY Cortland graduates Michael Jock and Lukas Wear at six days, 23 hours and 45 minutes.

Jaworski had set a different kind of record in January this year, hiking the 46 with Nick Glasser in what was possibly the first supported High Peaks thru-hike ever in winter.

On Thursday, the three cousins emerged from their 198-mile, unsupported hike at 10:18 a.m. to a crowd of family and friends waiting for them. Their route, tracked by a SPOT GPS tracker, started at Donaldson Mountain in the western-most portion of the High Peaks. They then traveled south and east before heading back west and then north.

At the trailhead parking lot, some of their kids held signs with drawings of Adirondack mountains on them which read “You did it!”

They found seats on the ground to stretch their legs, a pizza slice in each hand, cuts all over their shins and smiles on their faces.

The three had just about eaten the last of their food a couple of miles up the trial. While they had planned for each to have 5,000 calories a day, when they woke up at 7 a.m. Wednesday, they only had 3,500 each.

“I have about 30 sunflower seeds left,” Paul said, throwing a depleted bag of seeds, chocolate and coconut oil on the ground.

Because of their lack of food and their anxiousness to reach the finish line, on their last night, Wednesday, they forsook sleeping and just hiked through the night.

He said Paul kept him up by singing grunge tunes.

They took two-minute rests every half-hour until the sun came up, setting down their loads, resting their eyes and backs against trees until a timer went off, and then dutifully shouldering their packs and continuing on.

“If everything went perfect, this is what would happen,” Paul said.

They saw beautiful sunrises and sunsets and had clear views from 45 of the peaks. They saw a porcupine earlier that morning and watched it waddle off the trail.

Along the way they each broke one of their poles, they crossed a washed-out bridge over a bog which Jaworski said was like picking they way across “floating Jenga pieces,” and they got soaked in the snow the second day.

The only injury occurred on the first day, when Paul hit the top of his head on a cut branch while ducking under a log. It left a crescent-shaped cut in his head that bled profusely, Dan said.

While hiking the Great Range, they had a panicked moment as they started to believe they were a day behind schedule. They were unsure whether they started at day “one” or day “zero” and were too exhausted to do trustworthy math.

“There was a moment when we got all goofed up because we were underfed and dehydrated and we couldn’t count days,” Jaworski said.

A call back to Glasser confirmed they were on track.

Jaworski said they had started with a big day, hitting the trail at 4:42 a.m. because they needed to get further than Bradley Pond before camping for the night to start ahead of previous record-setters.

He said he had studied their routes and developed his own for bushwhacking from peak to peak.

They had mostly perfect weather for the trek, except a snowfall on Saturday, which they said they were not prepared for.

Jaworski said he had several strategies for filling their 40-pound packs with as much stuff as possible, but would not reveal them all, saying his “packing secrets” are too important.

The three had put peanut butter in soft-flask water bottles to make it easy to squeeze out.

“Then at the end, when you can’t get any more out, you put water in and you make peanut milk,” Jaworski said. “It was so good. Amazing. … It was like a milkshake almost.”

Setting out on an unassisted hike, carrying all their supplies in their packs, “It was a little nerve-wracking driving away from the house,” Jaworski said.

He said he just wished he had brought soap.

At the trailhead, they all washed off in the river.

All three were visibly sore Thursday, and Jaworski said his knees felt like they were being tightened in a vice. Everyone cheered when they popped champagne to celebrate, but Jaworski said he preferred popping the blisters on his feet.

Paul said he had never done a multi-day hike or hiked a High Peak before, but that when Jaworski asked him to join the attempt, he immediately agreed.

“I’m always up for a good adventure,” Paul said.

He said he knew it was going to be grueling, though.

Dan said he and Paul have competed in triathlons, adventure racing and ultra running events before, and that they enjoy competing and hiking alongside family members. Being led by Jaworski through the wilderness was great, he said.

He said they pushed themselves as hard as they could while still knowing they could make it home.

Dan added, however, that he does not have a big interest in doing a winter 46er hike.

Jaworski said this hike was better on his body than the winter thru-hike, in which he got wind-burn on his face, lasting soreness in his legs and neuropathy in his toes. He was not able to feel his toes for a while after finishing.

This time, with more daylight and less snow, he saw more of the land.

“I wanted to just sit there (on the peaks) and enjoy it, but we were on the move,” Jaworski said.

He said though he plans intense adventure hikes, he also still enjoys day trips. He said he wants to return to some of these peaks to spend more time on their mountaintops.

He also was already talking with Glasser about doing something with the Long Trail in Vermont.