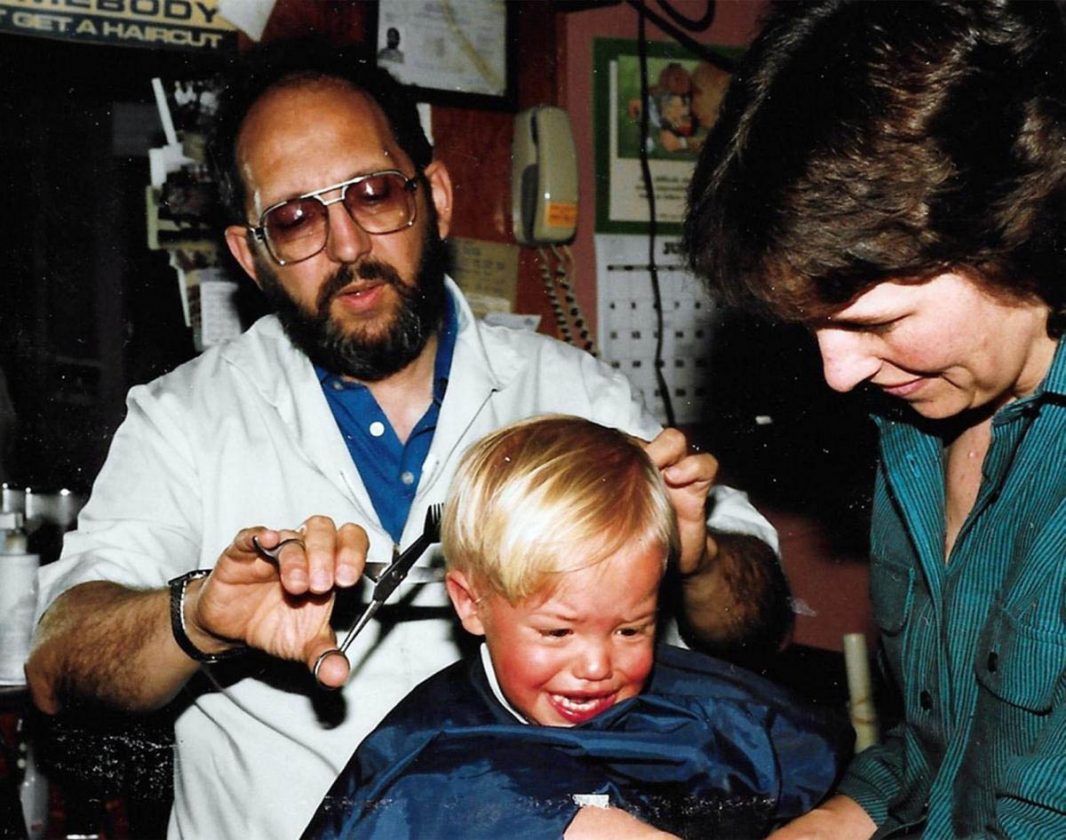 While Gabe Lopardo has had thousands of satisfied customers over his 65-year career, Silas Martin was not one of them, despite the efforts of his mother, Linda, to soothe him. (Provided photo — Malone Telegram)

CHATEAUGAY — Haircuts weren’t the only thing provided at Gabe Lopardo’s Barbershop on Main Street in Chateaugay.

There was “no lack of advice they will give you,” Assemblyman D. Billy Jones, D-Plattsburgh, said of Lopardo and his legion of regulars who made the barbershop a social center of the village for 65 years.

But people will have to go elsewhere for both haircuts and advice when barbershops and similar services are allowed to reopen under New York’s response to the COVID-19 pandemic. Lopardo said earlier this week he has decided to retire.

“After some careful consideration and 65 years in business on Main Street in Chateaugay, I have decided to retire from barbering,” Lopardo said in a letter announcing his decision. “It’s time for me to hang up my jacket, fold the cape over the chair and put away my clippers and scissors.

“I want the memories of the barber shop filled with gentlemen patiently waiting their turn and sharing stories to be the memories we have of this piece of Americana. After preparing the shop for its post-COVID-19 requirements, I just couldn’t do it,” he wrote.

In recognition of the shop’s 60 anniversary, Jones — then the chairman of the Franklin County Legislature — sponsored a resolution that called Lopardo’s “the cornerstone of the Village of Chateaugay” that “has always been a social gathering point for people to chat and catch up on the local news.”

“Gabe’s shop is still the cornerstone of that village,” Jones said in an interview Wednesday. “It’s sad to see it go.”

Lopardo has been cutting hair since he was 18 years old. After graduating from Chateaugay High School, he went to Schenectady to attend the Royal Academy Barber School just before his 18th birthday — state law says barbers have to be at least 18 — then returned to join his father in the “family business.”

“At that time, there were six barber shops and all the store fronts were occupied,” Lopardo reminisced. “Chateaugay Main Street was busy and bustling. We worked six days and three nights per week.

“From 1960-1962 I served in the army and returned to the business. From that time on I’ve seen many changes both in haircuts and the Main Street scene,” he wrote.

“I take great pride in my trade,” Lopardo wrote. “I’ve had the patience and responsibility to give a squirming toddler his first haircut. I’ve put in many long days and might have caught a nap or two on others. I’ve made many “house calls” with my black case to trim the hair of customers who were unable to visit the barber shop. I’ve had the honor to go to the funeral home to cut someone’s hair for the very last time.

“The walls of the barber shop have heard the roar of laughter from many good jokes. The whispers of some sad news. The witness to some poor parking and quite a few accidents at the four corners. The hard sell of both salesmen and politicians. It was THE GATHERING PLACE for the news of the day,” he wrote.

For some, those other activities were what drew them to Lopardo’s shop, Jones said. The haircuts were sometimes secondary to the conversation and camaraderie in the shop, he said.

The shop wasn’t just a place where news was passed on — it was sometimes a place where news was generated. Lopardo served as a village trustee from 1978 to 1996 and as mayor from 1996 to 2009. It was in that year that Jones, then a political neophyte, went to the shop to ask Lopardo if he was going to seek another term as mayor — and if he thought that Jones could step into the position if he wasn’t.

While Lopardo’s decision to retire is a sad one for the village, Jones said it was understandable. After 65 years, “he certainly deserves to be able to do what he wants.”

Lopardo, for his part, said he wanted to make sure his customers — regulars and those who just stopped in — knew he appreciated them as much as they appreciated him.

“I want to thank my customers from near and far,” he wrote. “I’ve enjoyed meeting so many one timers just passing through, and to my regulars, it’s been a true pleasure.

“This small business has provided very well for my family, faith and community. Thank you all for your patronage.”