Departments from across the Tri-Lakes help to battle fire 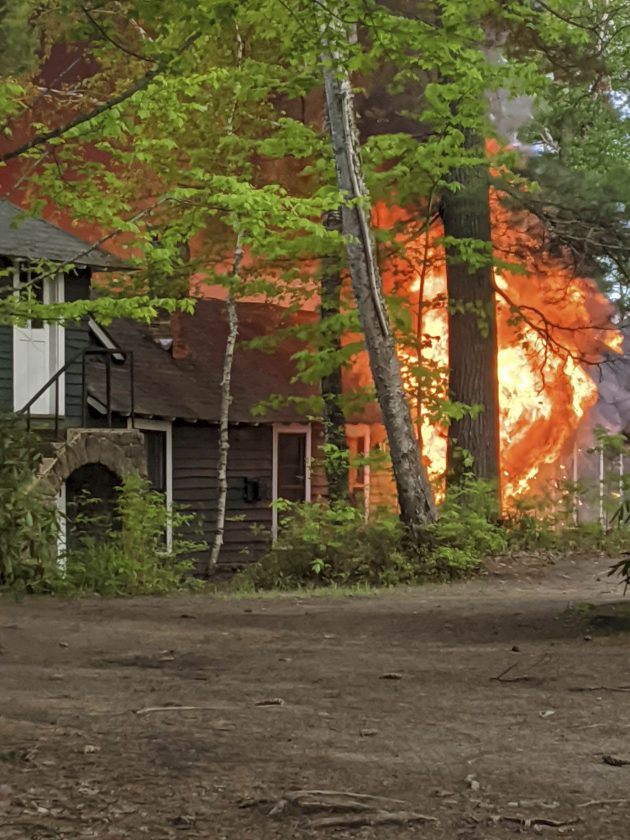 PAUL SMITHS — A fire ripped through buildings on the historic White Pine Camp property in Paul Smiths on Sunday evening.

The fire was called in shortly before 7 p.m. and had reportedly spread to at least three of the buildings on the property of one of the Adirondacks’ great camps, which was built in 1908 by New York banker Archibald White.

Andrew Quinn, the owner of Desperados Restaurant in Lake Placid, discovered the fire, with his wife Amy Fisher Quinn. The couple were celebrating their anniversary at the camp when Andrew heard sounds coming from the workshop on the property. Quinn, a 25-year veteran of the Keene Valley Fire Department, headed toward the workshop, but the fire had already began consuming the building and quickly spread to adjacent structures, including the cabin where the Quinns were staying.

“The cabin where we were staying is now fully engulfed and it is spreading,” she wrote in a Facebook post, along with photos she posted from the scene. “It spread through our cabin within 4 minutes as we watched.”

Fire departments from around the Tri-Lakes all responded to the fire.

Early on, the gate to the White Pine Camp was mobbed with emergency vehicles and firefigthers suiting up. Fire trucks had to back in around 2,000 feet to get to the camp. Black smoke could be seen hovering over the Paul Smiths area.

The White Pine Camp was visited by the rich and famous over the years, and in 1926 it was the Summer White House for Calvin Coolidge, the 30th president of the United States, who served from 1923-1929. Coolidge was the country’s vice president elected on the ticket with Warren G. Harding in 1920, and took over the presidency following Harding’s sudden death on Aug. 2, 1923.

The White Pine Camp, which is located on the shore of Osgood Pond, has had several owners including Paul Smith’s College, which held the property until 1983.

Howard Kirschenbaum, a historian and author who has played a lead in managing and helping restore historic camps around the Adirondacks, was listed as a current owner of the property. He has also been involved in preservation projects of other great camps including Camp Sagamore, Uncas and Camp Santanoni.