Nearly 150 gather in Keene to express their outrage

Demonstrators line the intersection of Routes 73 and 9N in Keene on Sunday, to protest police brutality throughout America. (Provided photo —Naj Wikoff)

Protesters join in unity in Keene on Sunday to condemn the killing by police of George Floyd in Minneapolis. (Provided photo — Naj Wikoff)

Whether in Keene, or in major cities across the nation, the message is clear, on signs held by Molly and Lucy Ward. (Provided photo — Naj Wikoff) 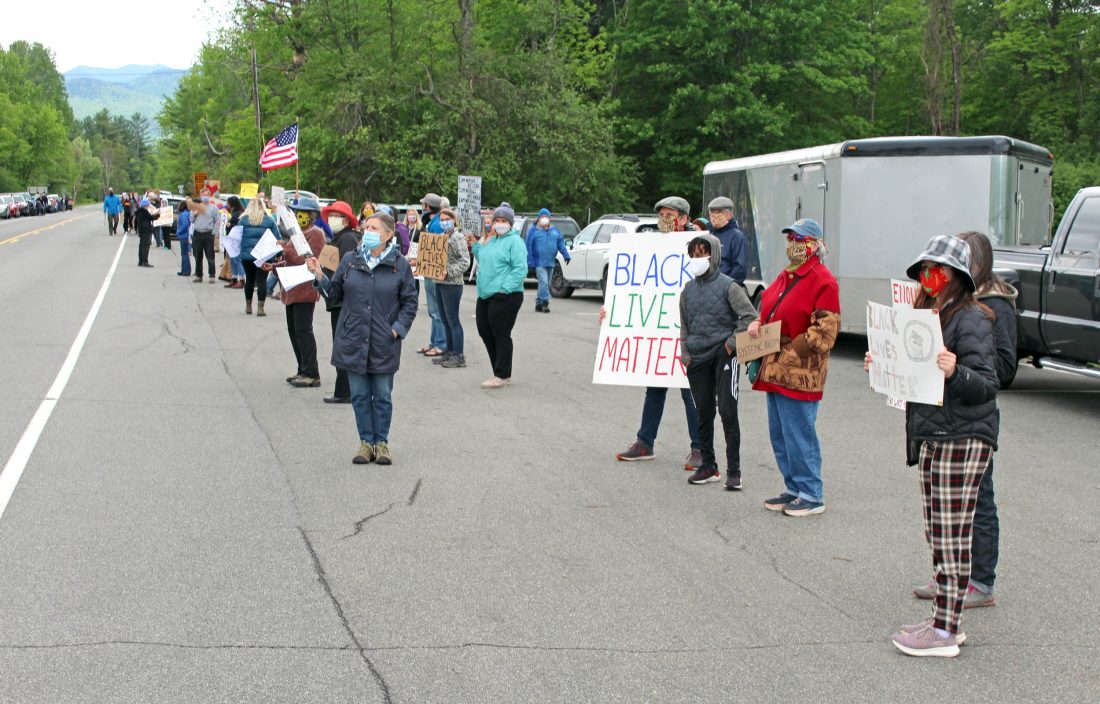 Demonstrators line the intersection of Routes 73 and 9N in Keene on Sunday, to protest police brutality throughout America. (Provided photo —Naj Wikoff)

KEENE — At the bottom of Spruce Hill in Keene on Sunday, nearly 150 people turned out to protest the brutal death of George Floyd and other recent deaths of black Americans. Floyd’s death, which was videotaped as he said, “I can’t breathe” while a Minneapolis police officer held him down with a knee to his neck, has sparked riots in that city and a growing number of violent protests across the country.

While in Keene all protesters wore masks and socially distanced themselves from others, their anguish and outrage were no less than has been expressed in other communities large and small. A couple days earlier, Monique Weston of Keene decided to send emails around to friends and acquaintances inviting them to join her at 3 p.m. Sunday at the junction of routes 73 and 9N in Keene.

“I had a long career dealing with race relations and black African American issues,” said Weston. “I taught in two black colleges in my career, and taught equity and diversity issues at the University of Maryland where we dealt with racial issues in a graduate program. The personal part is knowing so many African Americans as friends during my life in Maryland. When I heard about Floyd, I just got so angry. The lack of leadership on the national level is just appalling to me. We need to have lots of white people vote for racial justice and change systemic racism in our country.”

No less appalling is the violence, which Weston, the daughter of a civil rights lawyer experienced in her youth when her parents’ barn was fire bombed. While others who turned out hadn’t experienced similar violence against themselves for standing up for the rights of others, they were no less angered. For Martha Spear of Lake Placid, the parent of a black child, her fear was for the safety and well-being of her son growing up in our society.

“This poor man died in this horrible way, his family is grieving,” said Spear. “This is not the first time a brutal death at the hands of a police officer has happened in our country. We have police officers around this country who have the capacity. It’s a trend. It’s heartbreaking and scary as I have a black boy. My son who is going to grow up to be a black man, and I fear for his life.” 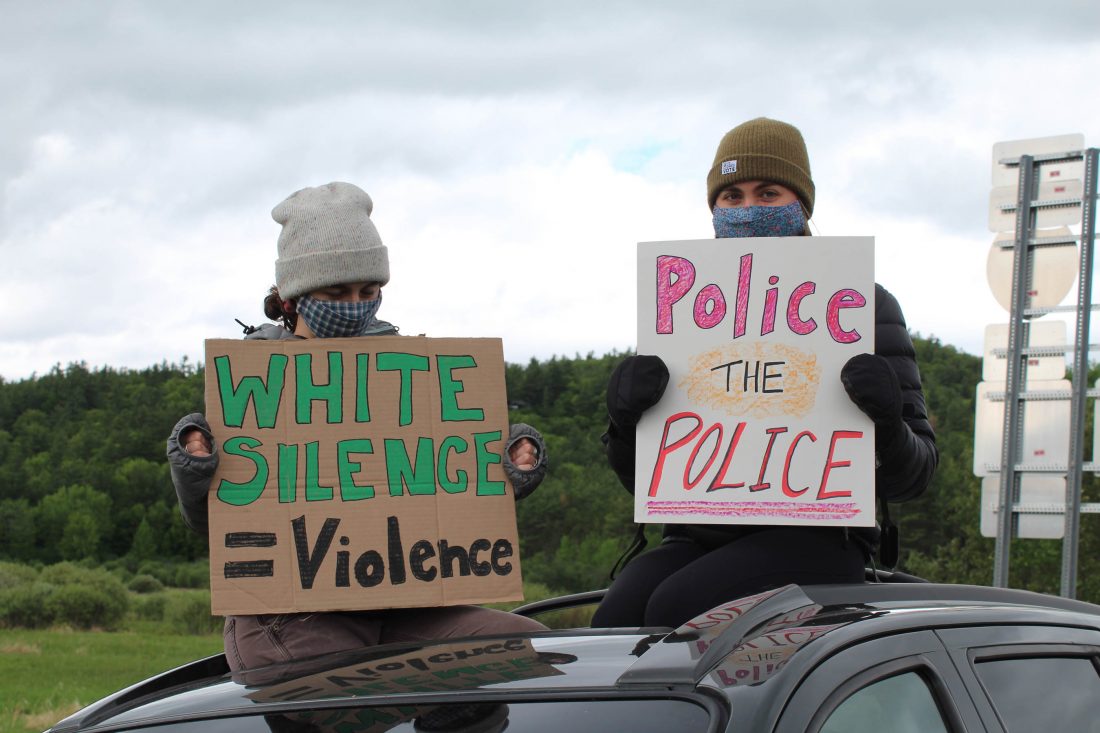 Whether in Keene, or in major cities across the nation, the message is clear, on signs held by Molly and Lucy Ward. (Provided photo — Naj Wikoff)

Person after person shared their fears and frustration at how badly people of color and others are being treated in this country. Several said how the COVID-19 crisis is bringing out the great injustices in our society ranging from a majority of Americans living paycheck to paycheck while the few amass staggering wealth to the lack of universal healthcare in this, the wealthiest nation on earth.

“I think it’s really wrong that people have to be afraid because of the color of their skin,” said Lilly Rother from Lake Placid, who was out protesting with her mom. “And that they feel being black is a death sentence.”

People attending came from around the region, young and old, some as individuals and others as families. The held up and waved their homemade signs at the many cars heading south from their weekend holiday in the mountains. Car after car honked their horns, waved their hands, and flashed their lights in solidarity.

“Pain, grief and anger brought me out today,” said Allison Stewart of Upper Jay holding up a sign that said, ‘I Can’t Breathe.’ “I want to see zero tolerance for police brutality.”

Weston was thrilled by the turnout, the largest she has ever seen in Keene. 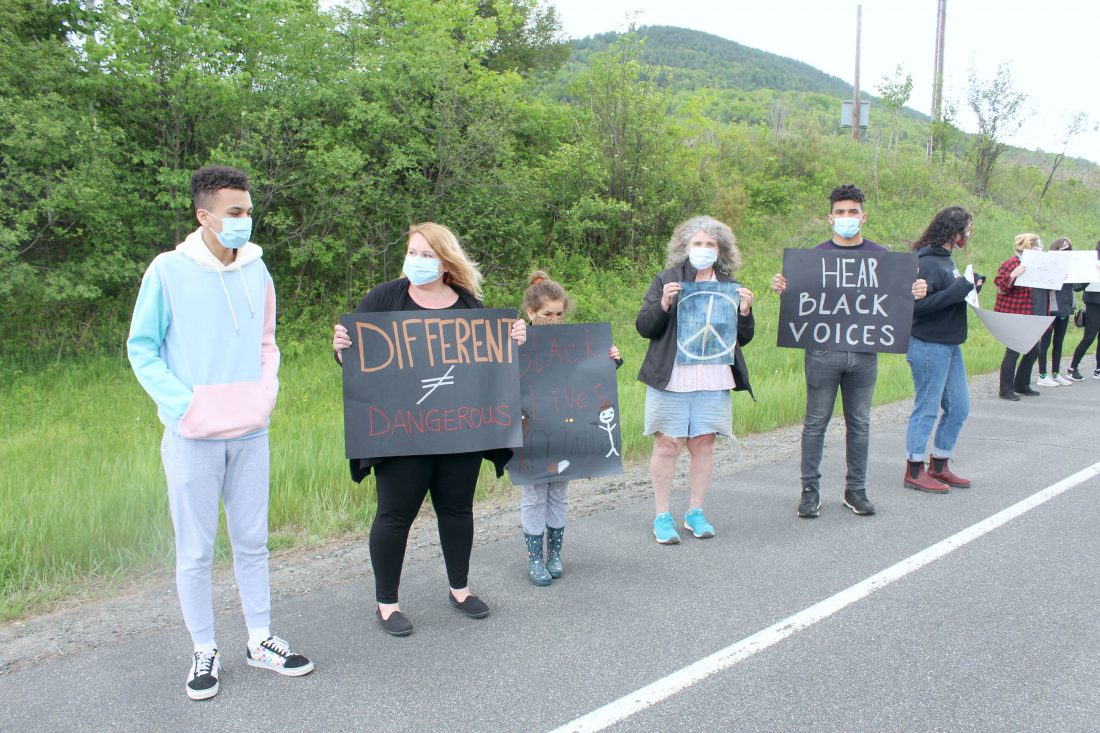 Protesters join in unity in Keene on Sunday to condemn the killing by police of George Floyd in Minneapolis. (Provided photo — Naj Wikoff)

As to whether or not it will make a difference, only time will tell. What is clear is that on a cold, blustery day sprinkled with rain, people turned out in large numbers in a tiny mountain hamlet, and they stayed for a long time in spite of the elements.