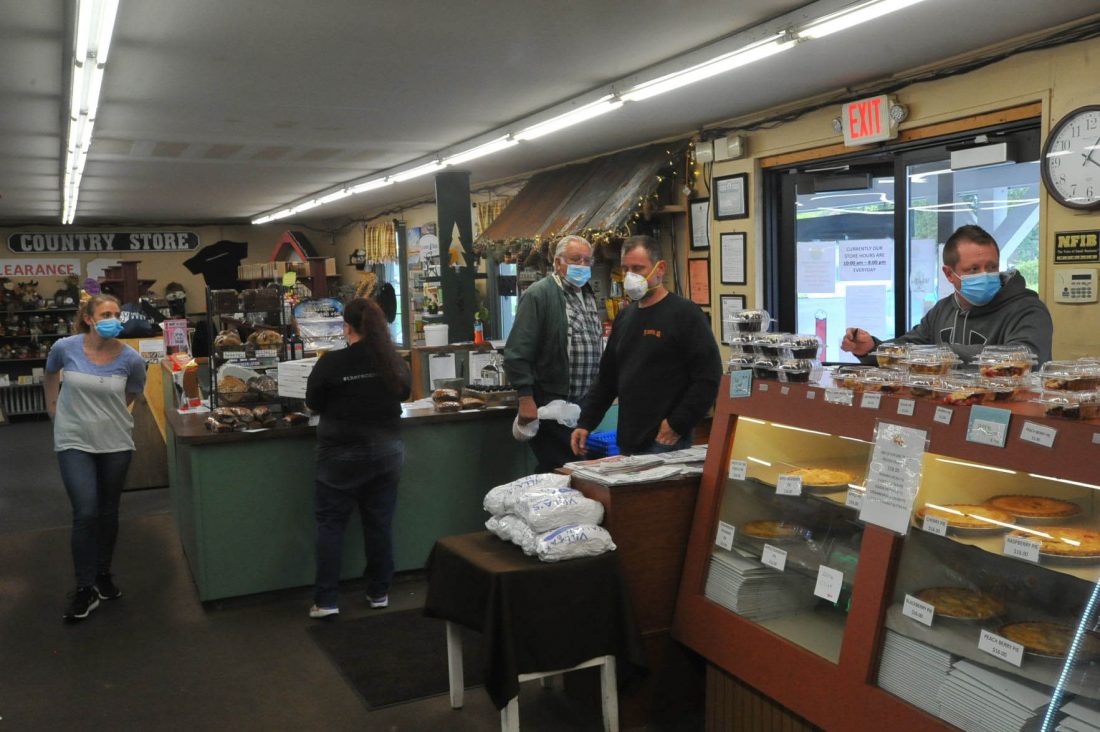 Bean’s Country Store on Ridge Road in Queensbury has been extraordinarily busy since the coronavirus pandemic took hold. Tuesday in the store, Tammy Brooks (far left), Courtney Perkins (at counter) and Jeff Beans (far right) are seen at work, while two customers pass each other near the front door. (Provided photo — The Post-Star)

At Yushak’s Market on Main Street in Shushan, business has tripled since the coronavirus hit, Debbie Yushak said.

“Because people are shopping local,” she said.

Customers are worried about going to supermarkets where it’s busier. When home is a hamlet with less than 1,000 residents, in a town (Salem) with less than 3,000, it’s easy to feel isolated from the outside world and, therefore, safer.

That feeling, along with supplies that smaller stores sometimes have when the larger stores have sold out, has created a boom in business at local markets.

“I’ve never seen business like this in my life,” said Jeff Bean, one of the owners of Bean’s Country Store on Ridge Road in Queensbury.

After the coronavirus first hit in March, he and the store’s dozen employees were working 12 hours a day, six or seven days a week to keep up with demand, he said. They had to push back the store’s opening from 6:30 to 10 a.m. so they’d have time to restock.

The rush has leveled out, but business is still at a higher level than a year ago, he said, even with strict social distancing measures in place. He has removed all his indoor seating, allowing only 10 people in the store at one time, and customers have to wear masks and stand several feet apart.

Employees wear masks all day, so he doesn’t think it’s asking a lot for customers to wear them while shopping. He has had to explain to some people that the state requires the masks, he said.

At Yushak’s, the owners briefly posted a sign that customers didn’t have to wear a mask in the store, but that has been taken down.

Customers can call in orders to Bean’s for curbside pickup. But mostly, he is seeing more customers in the store, buying bigger orders, Jeff Bean said.

“In the beginning, it was the whole toilet paper thing. I must have gone through 4,000 rolls in a week-and-a-half. Now, it’s the whole meat shortage thing,” he said.

They grind hamburger meat in-house and had ordered five 70- to 80-pound cases of beef that “we went through in a day-and-a-half. We usually don’t go through that in a month.”

Now, they’re selling 5-pound tubes of ground beef, and 870 pounds of that got snatched up in four days — “in 5-pound increments,” he said.

“The first week, I thought, oh my God, this is crazy. Now, everything is starting to slow down a bit,” he said.

At the Luzerne Market on Main Street in Lake Luzerne, Jim Mackey said his business has leveled off, too, after an early pandemic rush, but is still up 70% over usual.

“They don’t make as many trips,” he said, but more customers are choosing convenience and small size over the larger selection, lower prices and bigger crowds at big-box stores.

He mentioned going to Lowe’s recently and waiting in a line that went all the way to the back wall.

“All over the country, people are avoiding the big stores, because they’re crowded,” he said.

A new drive-up window at the market, where customers can pick up orders they called in without leaving their cars, has been popular, he said.

“I’ve got two people shopping all day every day, filling the orders,” he said. “There’s a large section of the population who are really taking this seriously, as they should be.”

He has had to kick out a couple of people who refused to wear masks, even when he offered them free masks from the store’s own supply, he said.

He has a sign up, modifying a traditional warning: “No shoes, no shirt, no mask, no service.”

He, too, has been struggling to keep up with the demand for meat.

“Two more weeks of this, we won’t have any beef,” he said.

High demand has meant higher prices from suppliers, and for small operations like JC’s Corner Deli and Market in Hudson Falls, where most of the business is in the sale of sub sandwiches, that causes a pinch.

She can’t boost the price of her subs, said owner Catherine Morris, because customers will go somewhere else, like Subway.

She sells some groceries, but mostly subs, and she has been busier than normal, Morris said.

She already was a stickler about cleanliness.

“All my girls have masks,” she said. “We do the social distancing. People come in, and if they don’t have a mask on, we stand back from them, then go and disinfect everything after they leave. My hands are quite raw.”

She has been taken aback by the nonchalance some people show: “What really got me the other day, I went to the big Walmart, and these mothers have masks on but not their babies,” she said.

Her insistence on being careful does take a personal toll, she said. She lives next door to her mother, who is 93 and who used to come to the deli with her every day. But she hasn’t even seen her for three weeks.

“I see a big difference in her, because she’s so solitary and not moving around,” she said.

The isolation is “good one way, bad another,” she said.