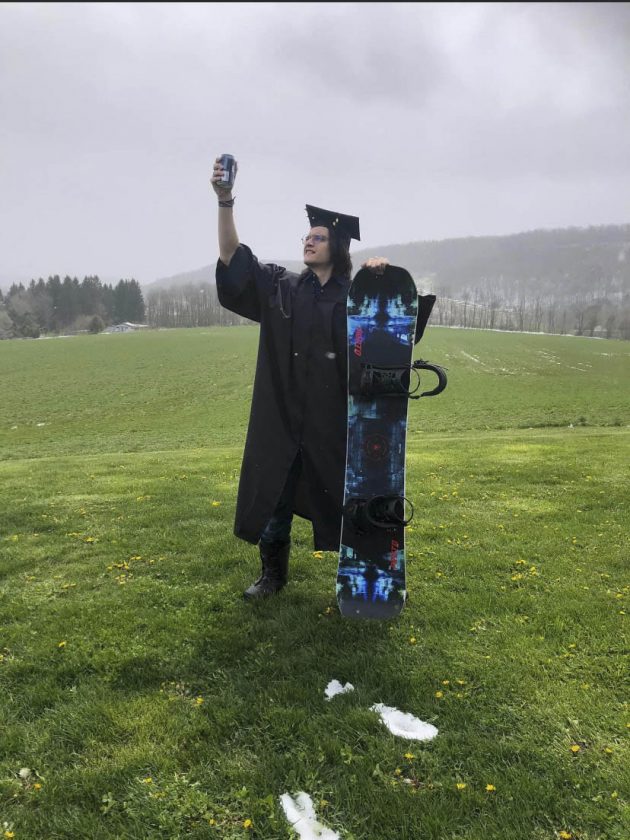 Matthew Merritt celebrates graduating from Paul Smith’s College from his home in West Winfield, holding some of the staples of his college experience, a snowboard and a Labatt Blue. (Provided photo — Chris Merritt)

PAUL SMITHS — Paul Smith’s College 74th commencement ceremony on Saturday would have been blanketed in a layer of early-May snow if it had been held at the shore of Lower St. Regis Lake, but this year the coronavirus moved the ceremony online.

“It was an incredible experience of being in the moment,” Oborne said. “You could really tell that we were all together, even though we couldn’t see each other.”

Some students posted photos on Instagram using the hashtag #smittypix, showing off their decorated caps, their commencement-watching setups and other ways they were celebrating graduation at home.

Matthew Merritt, of West Winfield, posted a photo his mother took of him toasting the class of 2020. Donning his black cap and gown, with a snowboard and beer in hand, and hanging out with his dog, he wrote.

“I felt saddened of course because we had to do the virtual graduation versus being person,” Merritt wrote in an Instagram message. “It really sucked not seeing my friends and everything the day of graduation for PSC shenanigans. But it was also really nice to be able to have my family around me and to celebrate with me. I think PSC did an awesome job with what they had at their disposal.”

In an Instagram post Merritt thanked his family, professors, friends and girlfriend for their support through his four years at the college.

He gave Environment and Society faculty member Joseph Henderson a shoutout by name, crediting his professor with, “changing and shaping my world views and making me a better person all around.”

Students received a “commencement-in-a-box,” which they opened during the ceremony. Inside they found their tassel and some more untraditional gifts from the college, sourced from local businesses. A balsam pillow from Moody Tree Farm, let them bring the scent of their alma mater home. Chocolate fudge from college chefs Kevin McCarthy and Marlyse Waskiewisz, maple syrup from the college’s sugarbush and a potato from Tucker Farms let them bring a taste home.

They also got some practical gifts, a seed packet to grow pollinator-promoting plants and a multipurpose tool.

After the formal ceremony, students broke into smaller virtual rooms so students could meet up and talk with their athletics teams or academic groups, whom they may not had seen since the campus closed due to the coronavirus in early March.

College President Cathy Dove, wearing her regalia in front of a backdrop showing a horse-drawn carriage being pulled through campus, said one thing was certain: everyone will remember the graduation of the class of 2020.

Joe Conto, a professor and emcee of commencement said he was seeing people log in from all around the country — Miami Beach, Florida, Portland, Oregon and Maui, Hawaii — and co-host Assistant Professor Kelly Cerialo, who was calling in herself from France, said internationally, people were attending from the Dominican Republic and Japan, and that there was a significant showing from Ireland.

“Although this is the last way that we expected to be celebrating commencement together, I’m glad that we had the opportunity to commemorate the students’ accomplishments and remarkable resiliency,” Cerialo wrote in an email.

She said after the main ceremony she joined the Business and Hospitality Department faculty, staff, alumni and graduates in one of the virtual reception rooms. She said it was nice to speak with graduates one-on-one, to congratulate them and to talk about what their plans are after graduation.