Kelly Thoreck and Lexi Smith’s car, covered with signs protesting tourism in the Adirondacks during the COVID-19 pandemic, is parked in front of the Lake Placid ski jumps Monday. (Photo provided)

Kelly Thoreck poses on the Northway over the weekend with signs protesting tourism in the Adirondacks during the COVID-19 pandemic. (Photo provided) 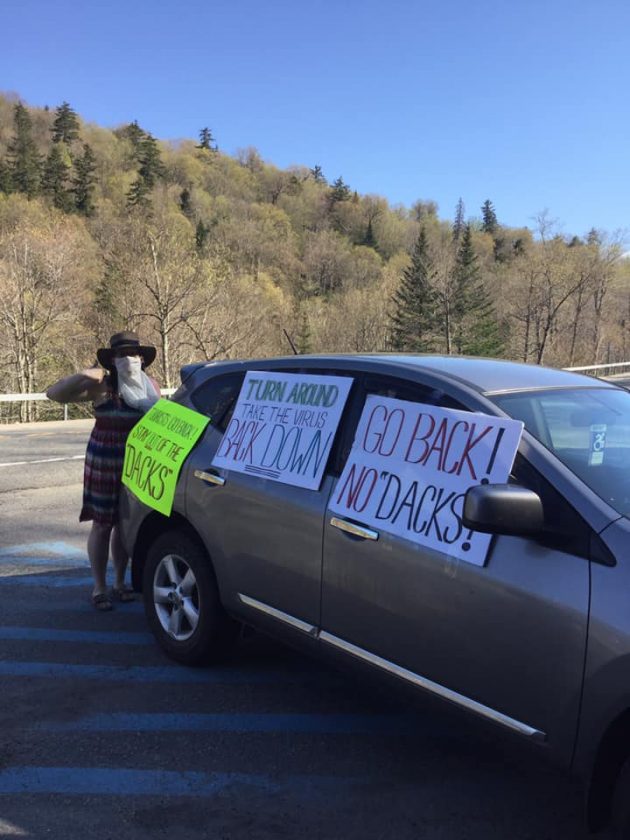 Kelly Thoreck poses on the Northway over the weekend with signs protesting tourism in the Adirondacks during the COVID-19 pandemic. (Photo provided)

Tourists coming to the Adirondacks on the Northway may have been surprised as they got off on Exit 30 over the weekend. A few cars were parked there with signs, such as a bright yellow one reading, “YOU’RE WELCOME … TO GO HOME!”

The posterboard signs were created by Kelly Thoreck and Lexi Smith, who were protesting against tourists coming to the area for Memorial Day weekend, voicing concerns about COVID-19 and resource shortages.

Other signs read “TURN AROUND, TAKE THE VIRUS BACK DOWN,” and “ANYWHERE BUT HERE.”

Thoreck runs a Facebook group called “We The People Of The Adirondacks,” which as of Monday afternoon had 45 members. The stated purpose of this page is to “stand against the rushed “reopening” of our communities. We discourage tourism, regionalism, irresponsible capitalism, and cronyism.”

Thoreck said there are several layers to her protest. One message is that tourists coming to the Adirondacks for day trips should go home. Another is that businesses what encourage tourism right now are being inhumane. Another is that the busy trailheads, bustling main streets and lack of precautionary measures she sees in tourists are dangerous to the area. 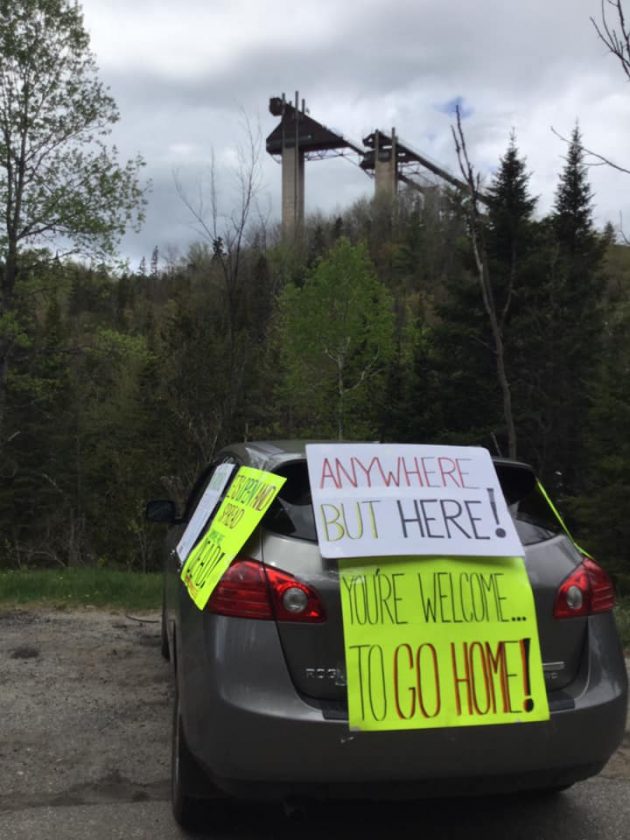 Kelly Thoreck and Lexi Smith's car, covered with signs protesting tourism in the Adirondacks during the COVID-19 pandemic, is parked in front of the Lake Placid ski jumps Monday. (Photo provided)

Thoreck said Friday was like “any other Memorial Day” on the Northway as she saw out-of-state plates on many cars exiting I-87.

“The ones coming in from out of town are shocked and appalled,” Thoreck said. “They did not expect we would be there.”

They also parked the car with its protest signs at the Lake Placid ski jumps in view of incoming traffic.

She said she respects that there are property owners with second homes, but she said she is against Airbnbs being rented to weekend tourists.

“The local community is at the very minimum asking people to practice safe social distancing and respect our homes,” Lexi Smith, whom Thoreck described as her partner, wrote in a Facebook message. “They have littered, they have ignored signs to distance. We think opening safely and humanely is the only route to take. Let’s learn from history and prevent the second wave from causing ANY unnecessary death.”

Thoreck said she and Smith live in the Tri-Lakes area but wouldn’t say exactly where.

Smith posted an image on her Facebook page of the New York Times front page for its Sunday edition, a wall of text listing the names and short bios of 1% of the more than 100,000 Americans who have died from COVID-19 complications since the pandemic reached the United States.

“This is what the future holds if a second wave hits,” Smith wrote. “We stand for YOUR life with our signs soon more new signs.”

Thoreck said she believes people in rural areas are especially vulnerable to the coronavirus and that infection numbers could rise because of incoming tourists.

“We have not had a first wave up here yet,” Thoreck said.

Thoreck said she herself is immuno-compromised and therefore at higher risk than most.

She said she had been living in Arizona over the winter but moved back here as the pandemic began to be with her mother, who also is at a higher risk.

“I had seen an atrocious amount of hoarding” in Arizona, she said.

She said she drove across the country to get here and noticed people denying the virus was a real threat. Not feeling it was safe to stop on the trip, she said she wore diapers and slept either in her car or on the floors of disinfected hotel rooms.

When tourism started opening here, she said she believes it could open the door to the same danger she felt in other states.

Thoreck said there are not official plans for when and where her protests take place, but she’s created a “model” that other protesters can follow. A few others joined them on the roadside over the weekend.

She said people driving past honk, take pictures, and sometimes stop and come over to talk to them. She said she’s gotten a lot of supporters online, but that she has felt in danger at times.

“We are two women who are out here, and the wack-jobs are coming out,” Thoreck said.

Thoreck said a state trooper talked to them over the weekend and said they are fine as long as their protest does not impede traffic, but that if there is a problem, there is a stack of laws they can be charged with violating.

The “We The People Of The Adirondacks” Facebook page states that these are silent protests.

“We will not engage verbally with anyone other than police, government officials, or the press and if we do, we will politely assert our 1st Amendment rights and be respectful,” the page says.

Thoreck said some supporters have wanted to bring firearms and openly carry them at the protests, but she has a clause against that.

“If you HAVE to come through,” Smith wrote on her Facebook page, “respect our homes, practice safe social distancing, hand wash and wear masks.”

APA to meet virtually on Thursday