This group of restaurants and bars on Main Street, Saranac Lake, is part of where the village board wanted to allow outdoor eating on the sidewalk starting Memorial Day weekend, but was not allowed to by the state. (Enterprise photo — Lou Reuter)

Cory Leach plates a burger in a to-go container in the Blue Moon Cafe kitchen on Thursday. Leach, the only chef at the eatery in Saranac Lake right now, said business has gotten busier at the cafe over the past few weeks as seasonal residents move into town, and that he’s grateful he’s been able to keep working through the COVID-19 pandemic. (Enterprise photo — Aaron Cerbone) 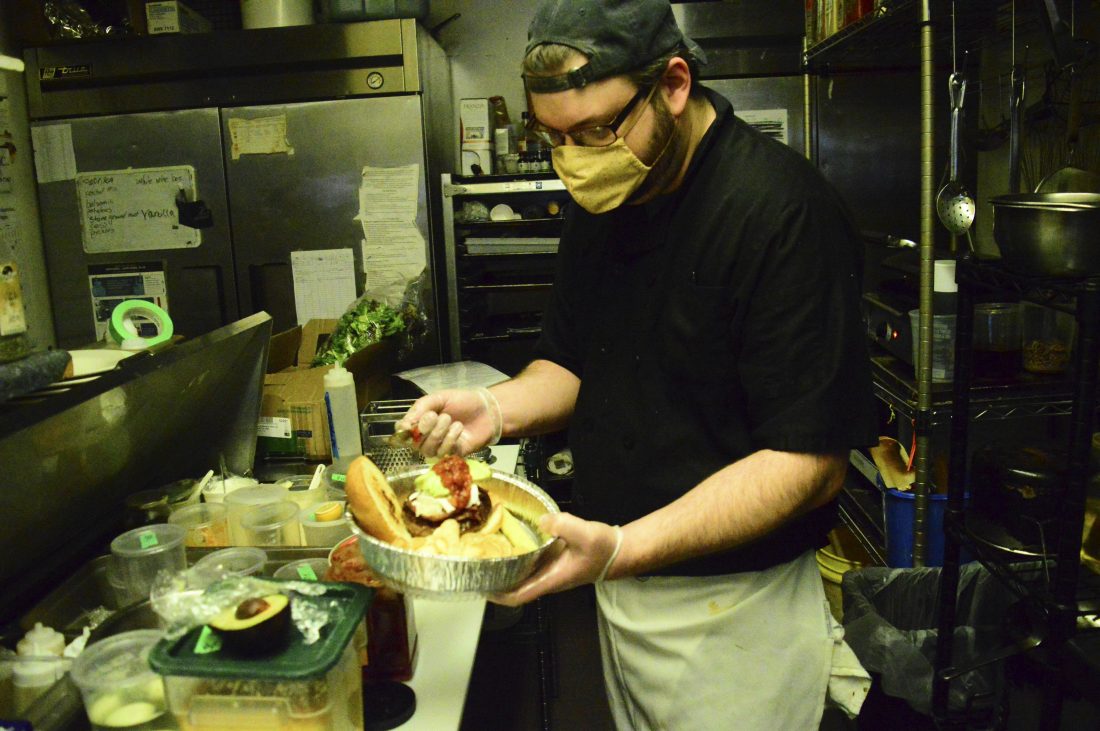 Cory Leach plates a burger in a to-go container in the Blue Moon Cafe kitchen on Thursday. Leach, the only chef at the eatery in Saranac Lake right now, said business has gotten busier at the cafe over the past few weeks as seasonal residents move into town, and that he’s grateful he’s been able to keep working through the COVID-19 pandemic. (Enterprise photo — Aaron Cerbone)

(UPDATE: The village of Saranac Lake has dropped plans for a soft business opening with outdoor dining Saturday, Mayor Clyde Rabideau announced this morning. “This concept was deemed non-compliant with Phase 1 guidelines by the North Country Regional Control Room members,” he wrote. A new story on this development will be posted soon.)

Starting this Memorial Day long weekend, the plan is to let restaurants and bars set up outdoor seating areas on village sidewalks, where customers ordering take-out food from restaurants could sit and eat. Later the plan is to include sidewalk sales by retail stores. This set-up would take place only in a defined downtown area and only during set hours on Saturdays until the state lets North Country bars and restaurants reopen.

Essex County Board of Supervisors Chair Shaun Gillilland, R-Willsboro, said the Saranac Lake proposal is not authorized under Phase 1 of the state’s reopening plan, which the North Country is currently in. The businesses that would be affected are on the Franklin County side of this village, which has a county line running down the middle of it, but Gillilland said the topic was discussed in the North Country Regional Control Room meeting about reopening. 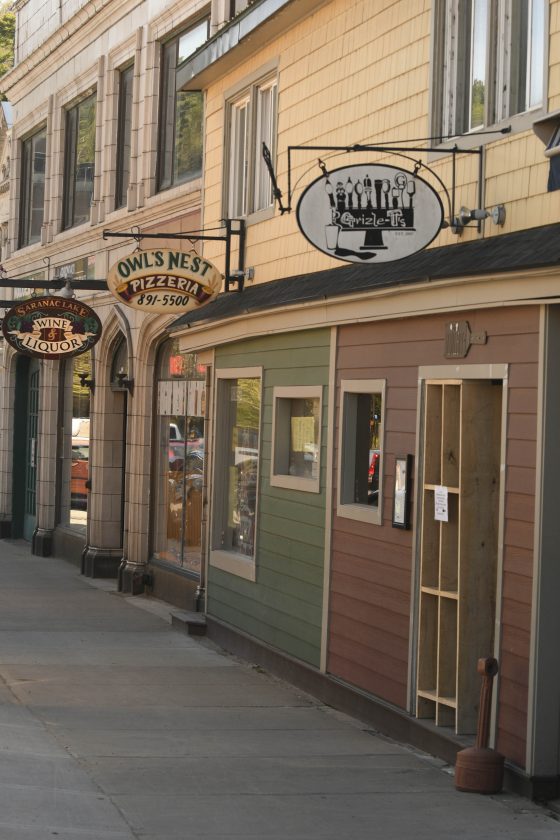 This group of restaurants and bars on Main Street, Saranac Lake, is part of where the village board wanted to allow outdoor eating on the sidewalk starting Memorial Day weekend, but was not allowed to by the state. (Enterprise photo — Lou Reuter)

“Phones blew up at public health because Essex County restaurants saw that and were, let’s say, upset,” Gillilland said.

The state has not yet announced an official position on Saranac Lake’s plan. Rich Azzopardi, a senior advisor for Gov. Andrew Cuomo, said he had not seen the announcement yet Thursday afternoon and did not follow up with a statement by press time.

Rabideau could not be reached to comment on others’ responses to the “soft start” plan.

Village Public Health Officer Ray Scollin said he could not comment on the plan because he had not seen it yet. He said he was not consulted about it and learned about the announcement through Facebook on Thursday.

Restaurant owners were first learning of this announcement when asked about it Thursday afternoon. They were not sure if they would participate until they learn more about how it would work. They said after months of COVID-19 emptying out their establishments, lost revenues and take-out orders, they look forward to being able to welcome their customers back.

“Nobody gets into the hospitality business to not see their patrons,” said Johnny Williams, a co-owner of Bitters & Bones pub.

Still, all the restaurateurs who talked to the Enterprise Thursday said they were going to take reopening slowly and didn’t want to commit to anything without knowing the safety and liability details behind it.

Bars and restaurants will be able to reopen for dine-in customers in Phase 3 of New York’s coronavirus reopening plan, which could begin June 12 at the earliest in the North County, if the region continues to satisfy a series of state metrics on COVID-19 cases, testing and contact tracing.

The village of Saranac Lake plan is for certain downtown businesses to provide, maintain and be responsible for outdoor seating areas on village sidewalks. They would be on the west (town hall) side of Broadway and Main Street from River Street to Bloomingdale Avenue, and on the south (Hotel Saranac) side of Main Street from Broadway to Church Street. Rabideau said these outdoor seating areas could be open from 4 to 9 p.m. each Saturday until Phase 4 begins, which could be June 26 at the earliest — although restaurant dining is allowed to reopen in Phase 3.

The seating will be set up to maintain social distancing, keeping patrons at least 6 feet apart and away from pedestrians. On sidewalk areas where these tables are set up, pedestrians are to walk in the parking lanes on the side of the street, which will be blocked off with barricades and traffic cones.

Rabideau said that when the North Country reaches Phase 2, which includes retail, downtown stores will also be able to put out tables to showcase their wares.

“Pedestrians will be required to maintain social distancing and are required by gubernatorial executive order to wear face masks in this downtown area,” Rabideau wrote. “Diners, obviously, will not be required to wear face masks. … At this time table service is not allowed under state guidelines. Patrons will pick up their food and beverages and bring their goods to the open tables and ‘bus’ their tables.”

Village board Trustee Rich Shapiro said the board will likely vote to temporarily eliminate the open-container law in these dining areas at its next board meeting Tuesday. That would let people buy alcoholic beverages from downtown bars and drink them out front.

“No part of this plan shall supersede or counter any part of the jurisdiction of the NYS Liquor Authority and the responsibilities any establishment may have thereunder,” Rabideau wrote.

How the plan was made

Rabideau said the plans were drawn up by him and the trustees, with planning and advice from village Chief of Police James Joyce and Manager John Sweeney, who designated the seating areas.

The idea was not raised at the village Board of Trustees’ last meeting on April 27, but Shapiro said the plan received “unanimous consent” from the board members, who talked about it via email and phone calls.

Shapiro said the plan is the same as if someone picks up food from a restaurant in town and eats it while sitting in a park.

Trustee Patrick Murphy, who is also the executive director of the Saranac Lake Chamber of Commerce, said the board heard from some business owners that something like this would be a good idea. He said the plan grew from their suggestions.

He said the chamber will get in contact with businesses to tell them about the plan soon, but they have not been contacted yet because the process moved quickly.

Matthew Cressey, who owns the new Barley Sandwich eatery on Broadway, said he is worried about what the plan means for his insurance. He wondered who would be liable for things that happen on a sidewalk outside his business. He said he would have to talk to his landlord about where his property ends.

Tricia Fontana, who owns Blue Moon Cafe with her husband Ken, said she would need several questions answered before she would open an outside seating area. She said she is mostly relying on guidelines from the state.

Williams said he supports taking measured steps before major steps, and he was optimistic about the idea. However, he also said he wants to learn more about it before his tavern would join in.

He said he believes the separation has been hard for his business’ “regulars.”

Billy Martin of Saranac Lake is a flight nurse and ski patrol trainer who in recent months started the Think Tank, a small group that meets periodically to talk about Saranac Lake issues. It recently compiled a “Best Practices Checklist for Retail” to give businesses advice for how to handle coronavirus, and he has been publicly critical of some stores’ leniency about mask wearing and social distancing.

He said this reopening plan is a neat way to reopen parts of the economy, which he said is necessary, but he added that he will probably stick to take-out.

He said he worries about people from different households meeting each other when they otherwise would have stayed isolated.

He also said that while the 6-foot social distancing rule is usually fine for people who are not wearing masks, outdoors that range can be extended because the wind can carry virus-carrying droplets from a cough or sneeze. He said that if someone upwind of you sneezes, 20 feet of distance is better than 6.

He suggested that businesses should screen patrons before they order by asking them a series of questions.

“If we do anything that allows the virus to spread, then we need to rethink it,” he said.

He also said he was concerned that this decision was made by a small group of people and was approved quickly.

“The village will explore the long-term option of eateries and taverns acquiring, by a license and fee, a parking space, protected by Jersey barricades, for open air dining in front of these establishments,” Rabideau wrote.

“Our business community has gone through a lot recently, and they should be commended for the work that they’ve done,” Murphy said.

He said he hopes to continue to see new ideas for businesses in the future.