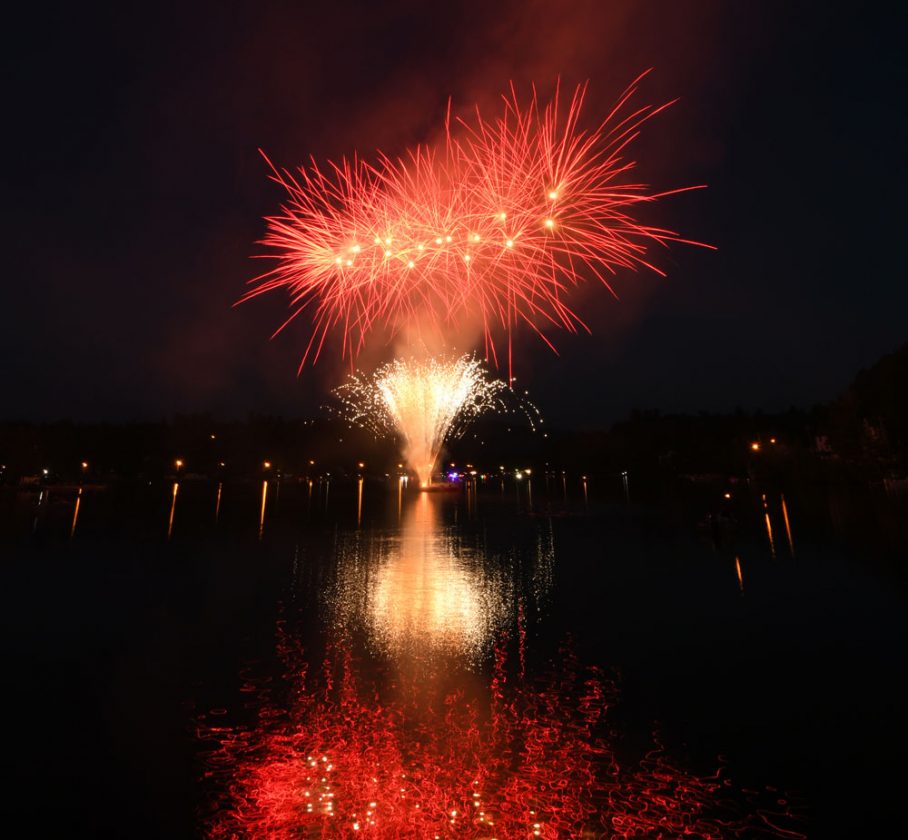 Professionally launched fireworks are reflected in Lake Flower in the village of Saranac Lake on July 4, 2019. (Enterprise photo — Lou Reuter)

SARANAC LAKE — It’s still unknown whether the state will allow July 4 fireworks amid the ongoing COVID-19 pandemic, but this week the Saranac Lake village board authorized a contract with its fireworks company, just in case.

“Out of all the phone calls I get, that is the number-one question: Will there be Fourth of July fireworks?” village Clerk Kareen Tyler told the Enterprise Friday.

Board members had discussed Independence Day fireworks at their previous meeting on April 27, with Mayor Clyde Rabideau and Trustee Tom Catillaz leaning toward having them while encouraging social distancing, Trustees Melinda Little and Patrick Murphy worried if that would be safe, with Trustee Richard Shapiro not indicating a preference. They postponed a decision to their next meeting.

At that meeting, on Tuesday, they unanimously agreed to authorize a $10,000 contract with Santore’s World Famous Fireworks.

“They just wanted to have a vendor in place and know that if we get the go-ahead, they can do it,” Tyler said.

Another summer concern has been the village beach on Lake Colby. A memo from Tyler to board members informed them that the village has only four lifeguards returning from last year and needs at least 10 to open the beach. The village is advertising for more, and she noted that the town of North Elba also has a shortage of lifeguards for the beach on Mirror Lake, Lake Placid.

Tyler added that Franklin County Public Health is requiring the village to keep a register of everyone who comes to the beach — names, times and contact information — in case coronavirus contact tracing is necessary.

Also at the meeting, the board did the following:

¯ Agreed to a $45,500 contract with Mid-State Industries to replace the roof on the police station at 1 Main St. Each of the three other bids was more than $10,000 higher.

¯ Hired two new police recruits, Gabrielle Beebe and Thomas Lauzon, who are to begin police academy in Plattsburgh in July. After the five-month academy, they will need at least three months of supervised field training before being allowed to patrol on their own. These were existing vacancies, not new positions. They will bring the Saranac Lake Police Department up to a full staff of 11 officers, plus Chief James Joyce, who added, “Beebe is a graduate of SUNY Albany with a double major in psychology and criminal justice, and Lauzon is a graduate of SUNY Canton with a bachelor’s in homeland security.”

¯ Promoted police office Travis Labar from patrolman to sergeant. He has been with the SLPD for four years and joins Leigh Wenske and Jason Swain as sergeants.

¯ Renewed for another year the village’s contract with the Saranac Lake Local Development Corporation, which can, on the village’s behalf, buy property, apply for grants or take other steps intended to boost the local economy. The LDC’s chairman is Murphy, who is also a village board trustee and works by day as director of the Saranac Lake Area Chamber of Commerce.