State Department of Environmental Conservation forest rangers and New York State Police Dive Team hold a training exercise at the Flume waterfall on the West Branch of the AuSable River in Wilmington May 13. (Photo provided by DEC) 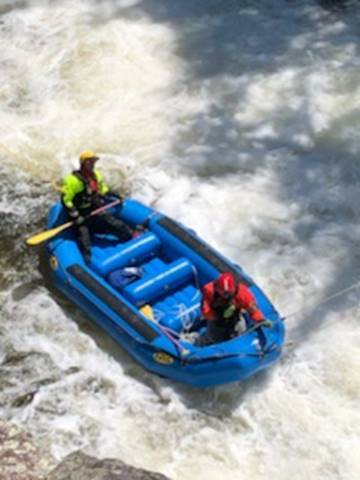 State Department of Environmental Conservation forest rangers and New York State Police Dive Team hold a training exercise at the Flume waterfall on the West Branch of the AuSable River in Wilmington May 13. (Photo provided by DEC)

The state Department of Environmental Conservation made five wilderness rescues in the Adirondack Park in the past week and also trained for future possible rescues at the Flume waterfall in Wilmington.

On Wednesday, May 13, DEC forest rangers, Troopers with the New York State Police dive team, and the Wilmington Volunteer Fire Department conducted a joint training at the Flume on the West Branch of the AuSable River in the town of Wilmington. The training focused on preparing for rescues at this popular recreation site where multiple people have died in recent years. The training drew upon the technical rescue, swift-water rescue and underwater capabilities of each agency. Pre-planning allows for a more organized and effective emergency response. 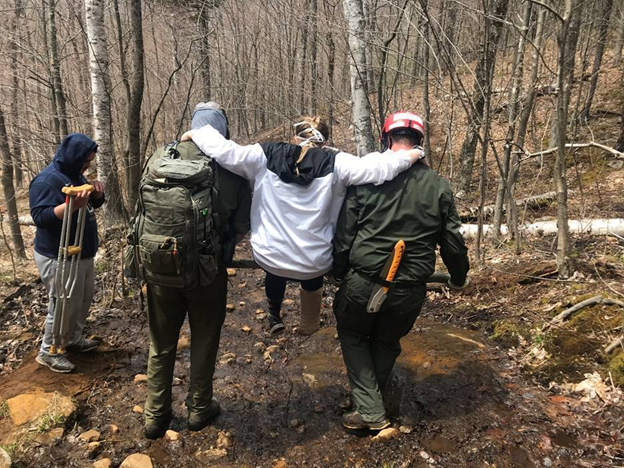 On Wednesday, May 13 at 5:20 p.m., Warren County 911 transferred a call to DEC’s Ray Brook Dispatch from two hikers who had become disoriented on the trail to Thomas and Cat mountains in the town of Bolton and needed assistance. The 76-year-old man and 69-year-old woman from Moreau stated that they intended to hike Thomas Mountain and return to their vehicle at the Route 11 trailhead. Recognizing they were lost with limited supplies, the hikers decided to call 911.

Warren County 911 provided rangers with coordinates that placed the pair south of Thomas Mountain, closer to Cat Mountain. Ranger Hannah O’Connor spoke to the couple on the phone and advised them to take the blue-marked trail while Forest Ranger Marie Arnold proceeded on foot to intercept them. Arnold began from Edgecomb Pond and reached one of the hikers, who told her the other had continued ahead north on the trail. Dispatch contacted the other hiker and, per Arnold, advised the subject to turn around and head back. Once the pair was reunited, Arnold escorted them back out to the trailhead, where they were met by O’Connor, who assisted them the rest of the way in an all-terrain vehicle. The couple was out of the woods by 8:57 p.m. 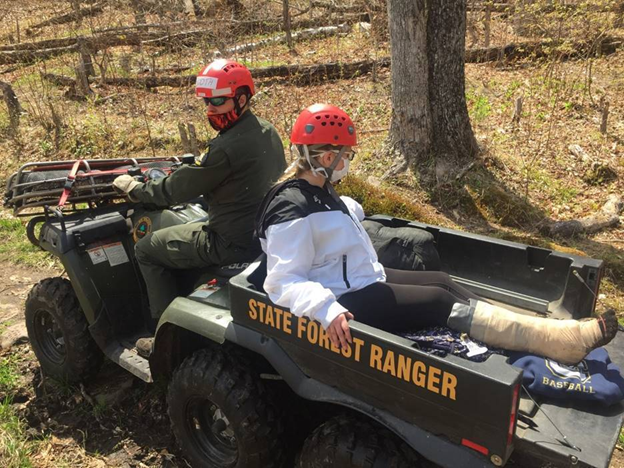 On Saturday, May 16 at 6:36 p.m., Essex County 911 transferred a call to DEC’s Ray Brook Dispatch reporting a 20-year-old Syracuse man lost on Giant Mountain in the town of Keene. The man was hiking with a group when he chose to head back down while his companions continued to the summit. The man reported that he was having difficulty following the trail and was not prepared for the icy conditions. Essex County 911 provided coordinates that placed the hiker near Putnam Brook.

Forest Ranger Robbi Mecus responded to the Roaring Brook Falls trailhead to assist the hiker but did not find him when she reached the location. Mecus requested a second attempt to get the missing man’s coordinates, which placed him on a ridge west of Roaring Brook. Mecus located the hiker at 8:14 p.m. and escorted him back to the trail and out of the woods. Once back at the trailhead, the hiker was reunited with the rest of his group.

On Saturday, May 16 at 6:55 p.m., DEC’s Ray Brook Dispatch received a call from a group of seven hikers requesting assistance after losing the trail while hiking to T Lake Falls in the town of Arietta. Dispatch advised the hikers to call Hamilton County 911 to get their coordinates, which placed them on Mill Stream.

On Sunday, May 17 at 10:10 a.m., DEC’s Ray Brook Dispatch received a call from a group of hikers on Poke-O-Moonshine Mountain in the Essex County town of Chesterfield. The caller said a 16-year-old female in the group fell, hurt her ankle and could not continue down the mountain.

Forest Ranger Lt. Brian Dubay and Forest Rangers Sarah Bode, Marie Arnold, Robbi Mecus and Jared Booth responded. At 2:20 p.m., rangers placed the hiker from Chazy in a UTV and started down the mountain. At 2:45 p.m. the group was back to the trailhead, and the hiker advised she would seek medical attention on her own for the ankle injury.

Another lost hiker in Bolton

On May 17 at 9:09 p.m., Warren County 911 transferred a call to DEC’s Ray Brook Dispatch from a hiker separated from his hiking partner on the Cat and Thomas Mountain trail. One hiker went further ahead and failed to meet up on Cat Mountain. After a brief FaceTime conversation, one of the hikers realized that the other, a 26-year-old man from Queensbury, was lost with no equipment or headlamp and only 30% left on his phone for a light.

Forest Rangers Hannah O’Connor and Chuck Kabrehl responded to the trailhead and followed 911 coordinates that placed the missing hiker halfway along the ridge trail between Cat and Thomas mountains. The hiker was told to continue south along the trail to meet up with the rangers coming to assist him. At one point, the hiker became disoriented along the trail and again reached out for help. Rangers told him to remain in place. At 10:55 p.m., rangers located the hiker and walked him out to the Edgecomb Pond trailhead.

(CORRECTION: A previous version of this article incorrectly referred to Forest Ranger Robbi Mecus as “he” when it should have been “she.”)