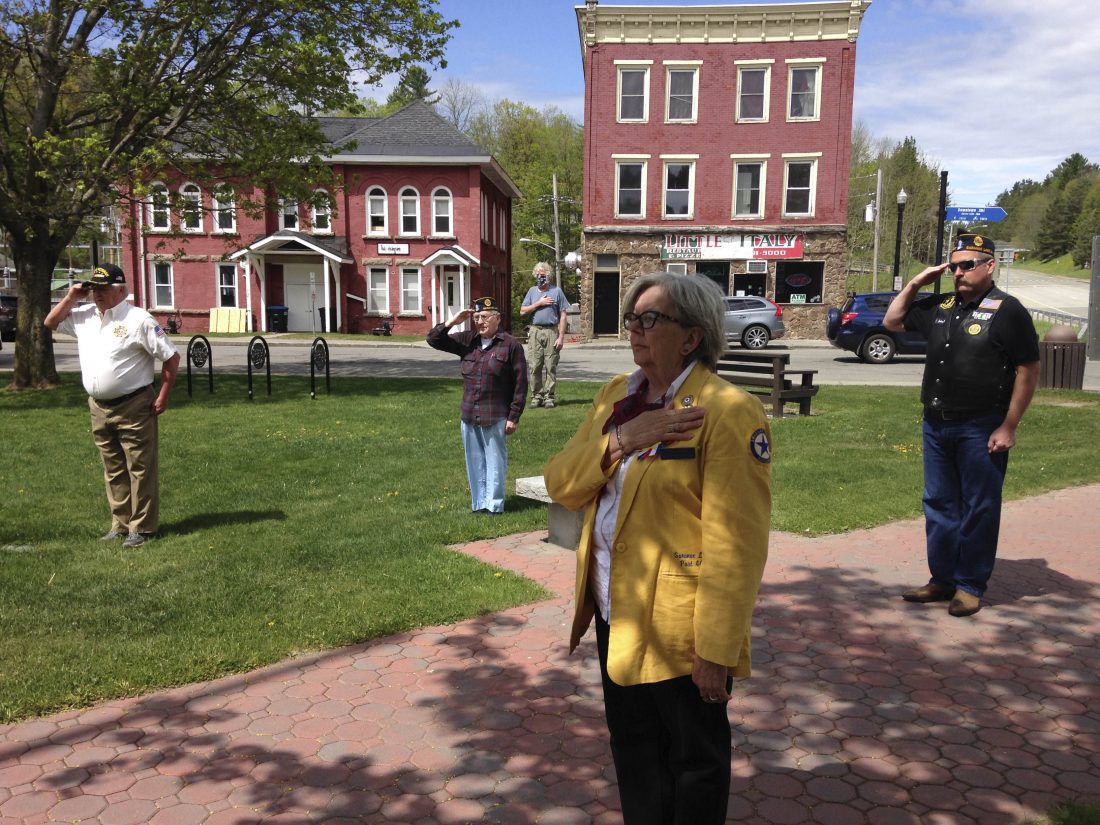 NEW YORK — New Yorkers marked Memorial Day with car convoys and small ceremonies instead of big parades as the coronavirus reshaped the solemn holiday, blending tributes to virus victims and frontline workers with the traditional remembrance of the nation’s war dead.

In a year that marks the 75th anniversary of the end of World War II, veterans wore masks and saluted while standing at social-distancing intervals at observances shrunk by virus precautions.

“We know something about loss, and we’re living it again,” the Democratic governor said.

In Rochester, officials looked ahead to the construction of the city’s War on Terror Memorial. In Long Island’s Nassau County, a small group of veterans in masks saluted flag-bedecked vehicles at a car parade and wreath-laying that was closed to the public but streamed online.

In Brooklyn, about 30 to 40 cars, including an old-style checkered cab, rode along the route usually covered by marchers at the United Military Veterans of Kings County parade.

They finished by circling a Veterans Affairs hospital, many honking their horns, and laying a wreath near monuments at the hospital’s fence.

“We weren’t sure if we were going to be able to do anything,” said parade chairman Raymond Aalbue. But he said he didn’t want the parade “to die on my watch.”

He said this year’s Memorial Day observance also honored people working on the frontlines of the COVID-19 virus fight.

“All day long we’re thinking about these health care workers and first responders and essential workers who are putting their lives on the line, daily, and have been doing that for a couple of months now to keep us safe,” said Allbue. “We owe them a very deep debt of gratitude for all they’ve done all these months.”

Mayor Bill de Blasio, a Democrat, joined a wreath-laying at the Brooklyn War Memorial, saying it was “a different kind of Memorial Day, but our appreciation for the heroes who gave their lives for our country has never been stronger.”

Police kept a watchful eye over lighter-than-usual crowds at Jones Beach on Long Island. A group of teenagers was ordered to leave because they weren’t wearing masks and keeping the required distance from one another.

Brianna Paredes said she was “just trying to have a nice day” with her friends after the pandemic upended their senior year in high school.

“I understand. I work and I wear my mask and my gloves,” the Levittown resident said. But outside at the beach?

“I’m over it by now. I feel like a lot of people are. I think that it’s kind of annoying,” she said while being escorted off the beach.

While the virus crisis has eased in New York, COVID-19 is still killing roughly 100 people a day statewide. There were 96 deaths Sunday, according to figures released Monday.

As the holiday approached, Cuomo loosened coronavirus-related restrictions last week to allow small public gatherings — initially just for Memorial Day observances and religious services. He extended the eased rules Friday to all gatherings after the New York Civil Liberties Union sued, saying that if it was safe to gather to honor veterans and practice religion, the Constitution requires the same right be extended to other gatherings.

The rules now allow get-togethers of as many as 10 people, provided that participants stay at least 6 feet (2 meters) away from one another or cover their faces when unable to maintain that distance.

At a news briefing after a ceremony at the Intrepid, Cuomo remembered veterans killed in combat and, more recently, by the coronavirus. He also emphasized “our heroes of today” — health care, emergency and other essential workers “who showed up and did their duty, lost their lives, to keep others of us safe.”

“In many ways, that is a microcosm of what we’re here talking about today on Memorial Day,” he said, announcing that the state would make sure that public workers on the frontlines who died of COVID-19 got death benefits through state and local pension plans. His office didn’t immediately provide further details.

While many Memorial Day ceremonies this year reflected the World War II anniversary, officials in Rochester held a ceremonial groundbreaking for a memorial that commemorates Americans killed in more recent conflicts.

The city’s forthcoming War on Terror Memorial will honor local members of the military who have died in wars since the 1990s. Construction is due to start next year.

Monroe County Executive Adam Bello, a Democrat, called the planned memorial an enduring reminder “of what it takes to be the land of the free,” WROC-TV reported.

In Queens, the group behind the Little Neck-Douglaston Memorial Day Parade arranged for one person to lay a wreath, another to do a flag ceremony and a third to play “Taps” while some others watched. It was a far cry from the crowds that usually attend the event.

But “we felt the need to do something,” executive director Vincent Mimoni said.

On Staten Island, another convoy of cars, led by motorcycles, took off in a procession after a wreath-laying ceremony at Hero Park.