Hiker traffic clogs trailheads on east side of Lake George 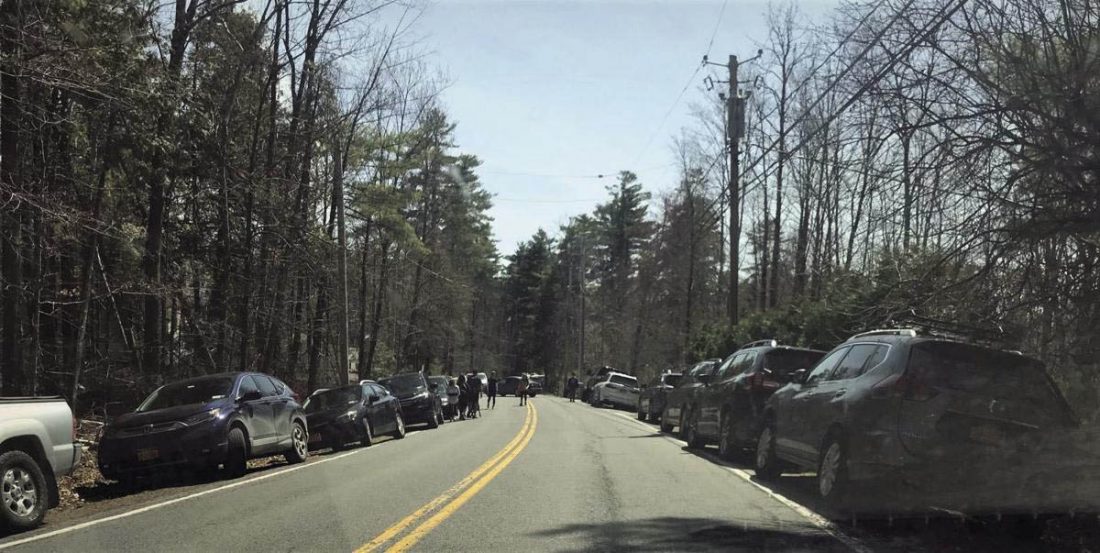 Hiker stand in Pilot Knob Road as vehicles lin both sides on April 25 in Fort Ann. Hikers have been flooding the eastern shore of Lake George, filling parking lots and spilling out onto the road despite “no parking” signs. (Provided photo — state Department of Environmental Conservation)

FORT ANN — Traffic issues continue to cause concerns on the east side of Lake George, especially this past weekend.

Warm spring weather to begin May brought out large numbers of hikers on the trails to Shelving Rock and Buck Mountain in the town of Fort Ann.

Congestion caused by vehicles parked along Shelving Rock and Pilot Knob roads, coupled with concerns that hikers aren’t practicing social distancing on the trails, is causing some worries.

On Sunday, because of overflowing lots and illegally parked cars, Shelving Rock Road was temporarily closed to incoming traffic by state Department of Environmental Conservation forest rangers at 12:30 p.m., DEC spokesman David Winchell said. The Washington County Sheriff’s Office took over managing the closure after that.

“Forest rangers estimate 150 vehicles were packed into the nine parking lots designed to hold a total of 90 vehicles,” Winchell said in an email Monday, adding that DEC rangers and Washington County sheriff’s deputies combined to issue 49 parking tickets. The road was reopened to two-way traffic by 3:30 p.m., after enough vehicles had left the area.

“It’s even worse up on Pilot Knob — there were in excess of 150 cars up there by the Buck Mountain trailhead,” Fort Ann town Supervisor Samuel Hall said. “That’s a lot of traffic.

“It’s not just that — with the New York PAUSE, they’re supposed to keep social distance and wear masks,” Hall added. “It’s kind of hard to do that when you have so many people out there.”

Traffic has often been a problem on those roads, but more so this year during the coronavirus pandemic that has shuttered businesses and forced people to work and study from home. People are looking for things to do outdoors, and hiking is a natural diversion.

“It’s great to have these resources available to the public, but in this scenario and this environment, it makes it more difficult,” Hall said.

“We still haven’t gotten a favorable response,” Hall said. “He obviously doesn’t want to touch the parks and trails.”

The biggest issue is the illegal parking along the roads — a nuisance for residents and a safety issue when emergency vehicles cannot pass freely.

“When a road is clearly marked ‘no parking,’ those rules still apply and they totally disregard them,” Hall said. “These are dirt roads without a lot of room on either side for parking. When they park on both sides of the road, they’re partially in the road and you can’t get emergency vehicles up the road.”