Construction to get in gear 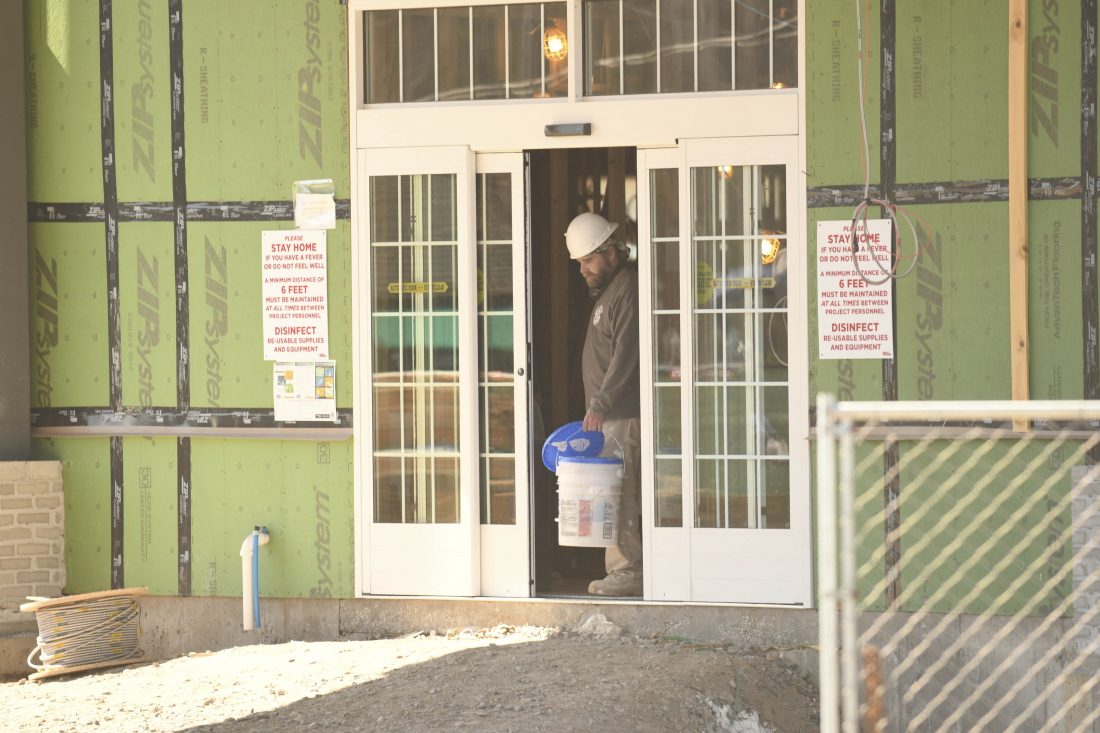 Construction was one of the last business industries New York state restricted to slow the spread the COVID-19, and now it will be among the first to restart.

Only one worker at a time has been allowed on a job site since March 27, when Gov. Andrew Cuomo added private-sector construction to his New York State on PAUSE order. That ends now, since construction is in Phase 1 of the reopening timeline for the North Country region.

It doesn’t mean all restrictions are lifted on the industry. Tupper Lake village Code Enforcement Officer Peter Edwards said contractors can resume normal construction but will be asked to adhere to state, federal and local health guidelines, including keeping 6 feet of distance between workers, wearing masks if they cannot distance, and driving in separate vehicles if possible.

Edwards said roofing contractors especially awaited this relaxing of the PAUSE orders. For them, work ground to a near-halt, as one-worker crews are dangerous on rooftops.

He said many contractors, especially two-person crews, have been waiting to get back to work over the past week. On Thursday he texted all contractors in town, letting them know they can go back to work on Friday.

There has been conflicting information from the state on the exact time Phase 1 business activity can open back up. Cuomo’s PAUSE order expires at 11:59 p.m. Friday. Two regional officials who sit on the North Country’s reopening panel — Franklin County Manager Donna Kissane and Jim McKenna, CEO of the Regional Office of Sustainable Tourism and co-chair of the North Country Regional Economic Development Council — said state officials told the North Country’s Regional Control Room members Thursday that businesses could not open up until Saturday after midnight.

However, Rich Azzopardi, a senior advisor to Cuomo, said on Thursday afternoon that Cuomo was going to issue an executive order saying Phase 1 businesses in regions cleared to un-PAUSE can reopen on Friday, a day early.

As of press time, Cuomo had not issued this executive order.

The biggest ongoing construction project in Saranac Lake never fully shut down, although it did slow down drastically. Now the company in charge hopes to gradually ramp work back up, although probably not to its former speed.

Saranac Lake village officials let work continue at the Saranac Waterfront Lodge on the shore of Lake Flower. Mayor Clyde Rabideau had said that since the state considered hotels essential businesses, the village was considering hotel construction essential, too.

But that didn’t mean work could proceed like before on this five-story, 93-room hotel. Andrew Milne, chief operating officer for Skyward Hospitality which is managing the project, said negotiating with various contractors and financial concerns was a balancing act.

He said Skyward did not make anyone work who didn’t want to, and that meant work was “severely limited” over the last two months. At its lowest point, he said, there were only three workers on site.

He said Skyward will pick up the pace now that construction is allowed region-wide, but “I don’t think we’re going to get back to where we were before COVID.” He said he tends to be cautious and that the company wants things done safely.

Contracting firms had been busy at the hotel all winter, with a goal of finishing it this year. Could that still happen? Maybe, Milne said.

“It’s kind of changing on a daily basis,” he said of the overall timeline. “It’s kind of been the bane of my existence, because everybody wants to know, from both a construction and a financial basis.”

Rabideau, who owns the contracting company Rabideau Corp., said limiting work to one worker per site did not slow work down too much.

He said getting material was slower, though, as they would have to call in orders to lumber yards ahead of time. Sometimes this meant faster service, as an order was waiting for pickup, but it often meant waitisng in a long line of trucks for each order to be fulfilled.

“We had to get accustomed to a new way of getting material,” Rabideau said.

Rabideau said the crews have become accustomed to social distancing and that they are testing employees with an infrared thermometer as well as a 10-second breath-holding test. Rabideau said if someone has a cough, they can’t hold their breath that long without coughing.

Clint Hollingsworth, a Tupper Lake village board trustee and owner of Hollingsworth Carpentry & Renovation, said this reopening is “huge” for his industry and that it has been a big morale boost for his employees. He said they told him they can’t wait to get back to work.

He said nearly all his company’s projects stalled for over a month, with one essential project — a kitchen — being completed by a one-man crew. He said the PAUSE order was a “big setback, but it had to happen.”

He said his employees took unemployment pay while they were off and that he did not feel the need to take advantage of federal Paycheck Protection Program loans. He said the work stoppage did not put his business “in the hole” but that it “feels great” to get working again.