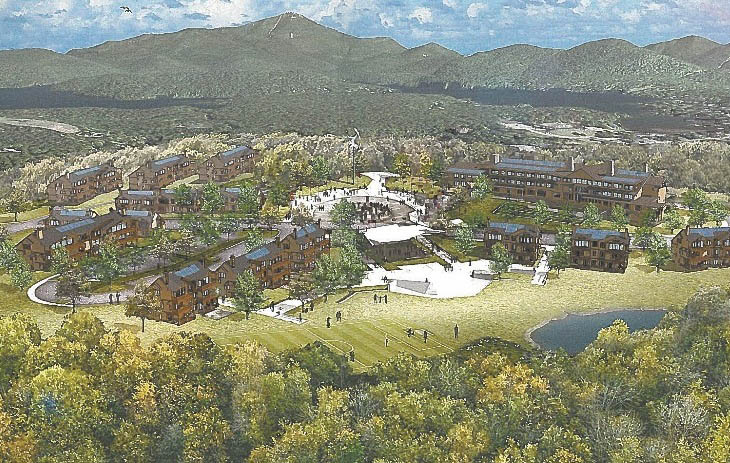 This image shows a conceptual design for a proposed housing complex at the former W. Alton Jones Cell Science Center on Barn Road, Lake Placid. This image was created by the Chazen Companies and Edgcomb Design on behalf of the Regional Office of Sustainable Tourism. (Image provided by the town of North Elba)

LAKE PLACID — The state Adirondack Park Agency will hold a teleconference public hearing Friday, May 15 for a map amendment request by the town of North Elba that would make it easier for a private developer to build a mix of new housing options at the former W. Alton Jones Cell Science Center.

Some of the new housing units are expected to satisfy a shortage of housing after many houses and apartments have been converted to short-term rentals in recent years. First, though, this housing is proposed to be used for athletes in the 2023 Winter World University Games.

The town had an option to buy the property but transferred that option to developer Joseph Barile more than a month ago.

The town wants the APA to reclassify 34.5 acres of the private property from moderate intensity use to hamlet, the park’s least restrictive land-use classification. The town filed its request on Jan. 30.

All eight APA board members would have to approve the change, and a single “no” vote would sink the amendment. Technically, a two-thirds vote is required, but that means at least two-thirds of the entire 11-member board, which now has three vacancies.

“The burden rests with the applicants to justify the changes in land use area classification,” the APA document for the proposal says.

The town is working with Barile and the Regional Office of Sustainable Tourism on the project. In early March, ROOST unveiled preliminary designs for redevelopment of the former W. Alton Jones Cell Science Center off Barn Road, about three-quarters of a mile west of the village of Lake Placid near the Outpost Plaza shopping center on state Route 86.

The proposed housing units — at least 160 of them — would include a mix of condominiums for sale, townhouses for lease, group housing and rental units, according to preliminary designs created by ROOST, Edgcomb Design and engineering firm Chazen Companies.

The 2023 Winter World University Games are expected to bring some 2,500 collegiate athletes from all over the world. After the games are over, the property would be used solely for long-term residential housing, according to ROOST.

The sprawling campus could include 20 buildings covered with solar panels, an amphitheater with more solar panels, a renewable energy tower, playing fields, an outdoor terrace, a trail network, a pool, a day care center and multiple parking areas, according to the designs, which are subject to change.

The design unveiling came less than a week after the North Elba Town Council took an option to buy the property from PEG Enterprises LLC, which was founded by the late J. Patrick Barrett — onetime head of the state Republican committee and later chair of the state Olympic Regional Development Authority board — Mirror Lake Inn owner Edwin Weibrecht and Adirondack Trading Company owner Gregory Peacock. The contract gave the town the exclusive right, for 10 months, to buy the land or to transfer that option to a developer. It also gave the town the ability to negotiate with potential developers to ensure the property is used for residential housing after the 2023 games.

Sometime around April 1, the town signed over its option rights to Barile’s company, Barile Family LLC. ROOST recommended Barile and had been working with him before the project was presented to the town board, according to town attorney Ron Briggs.

Barile is a former Olympic luge athlete known for building the Whiteface Lodge and the Outpost Plaza, both in Lake Placid.

“Joe is a well-known contractor, and he can get the job done, if anyone can,” town Supervisor Jay Rand said Wednesday. “He will proceed with due diligence and speed, as he always does. It’s a great project for the town.”

The town’s option agreement requires Barile to rent “not less than 66% of the total housing units developed at the site” with a rental term not less than six months.

ROOST CEO James McKenna has said the hope is for construction to begin in spring 2021.

Hamlet classification is intended for the park’s most populated clusters that already have varied development and services.

The property in question adjoins hamlet areas to the north, moderate intensity use to the east and state wild forest land to the south and west.

A Draft Supplemental Environmental Impact Statement containing detailed information regarding the proposal is also available on the agency’s homepage, www.apa.ny.gov.

To connect to the APA teleconference, go to www.apa.ny.gov. Detailed information on how to participate in the teleconference and submit comments is found in the “Upcoming Remote Public Hearings” section on the homepage.

The agency will accept public comment until May 30. The public is encouraged to submit comments to Environmental Program Specialist Matthew Kendall in writing to MapAmendment_comments@apa.ny.gov or by voicemail at 518-304-6168.