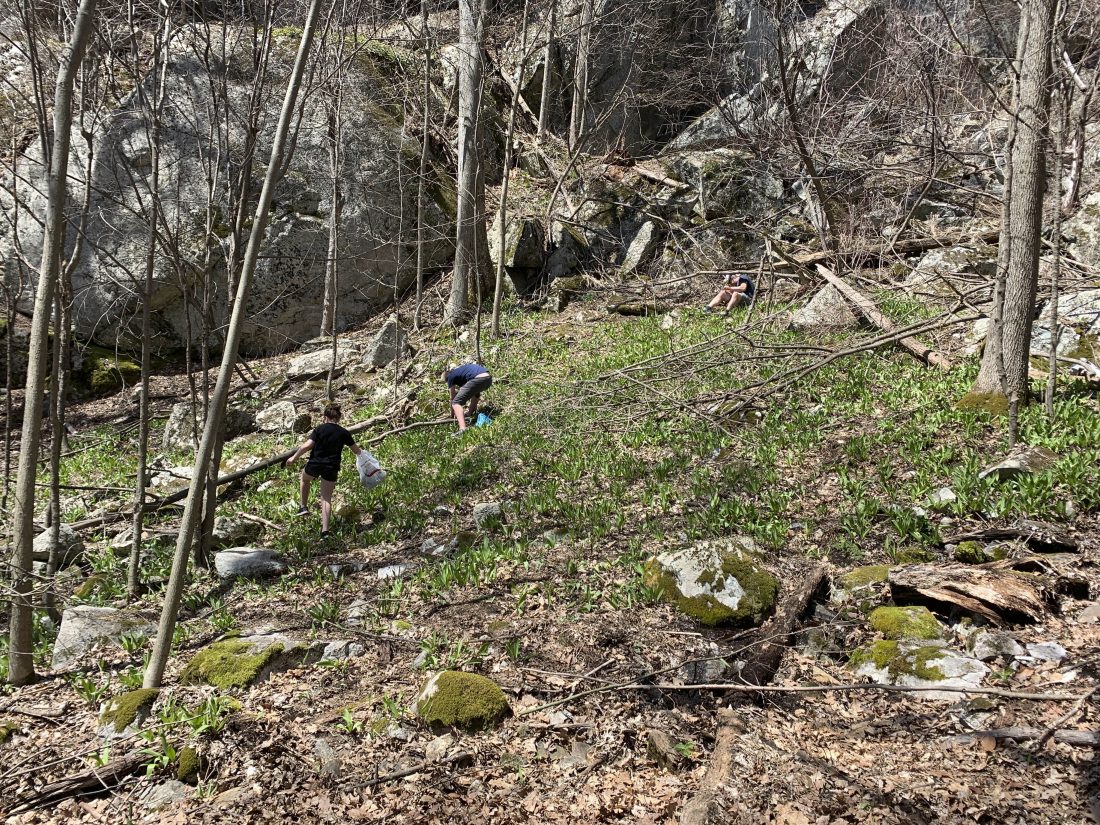 From left, Kate and Dylan West and Nathaniel Stephens pick ramps, wild leeks prized by chefs, from a large patch on the slope of a mountain Saturday. Sunshine and warmer temperatures drew a large number of people outside that day. (Enterprise photo - Peter Crowley)

KEENE VALLEY — Threat of exposure to the novel coronavirus and recommendations to steer clear of popular trails deterred some hikers from the High Peaks this weekend, but nature-seekers still flocked to a few trailhead parking lots here.

On Saturday clusters of cars — at one point more than 90 of them — could be seen at the trailheads leading to Cascade and Porter mountains in Lake Placid. The Adirondack Mountain Reserve parking lot in St. Huberts also saw some use. Other popular spots, such as the Garden and Rooster Comb trailheads in Keene Valley, were relatively quiet.

“It was a beautiful weekend, there was a lot of traffic in town. Stewart’s was crowded. It was very spot-by-spot — the Garden and Rooster Comb were half-full, but out by the AuSable Club, people were out and illegally parked on the town road,” said Keene town Supervisor Joe Pete Wilson Jr.

State Department of Environmental Conservation forest rangers responded to the vicinity of AuSable Club Road, off of state Route 73, to write parking tickets for those who were illegally parked there. A few hikers also illegally camped at Marcy Field in Keene Valley over the weekend, according to Wilson. That prompted forest rangers to respond there, too.

“With great weather and fewer tourist activities available than usual with restaurants and museums closed, it led to perhaps the highest use rangers have ever seen in the month of April,” forest ranger Scott van Laer said, speaking in his position as a delegate for the forest rangers’ union.

Van Laer said most people abided by the parking limitations on state Route 73, and parked elsewhere when a parking lot was full.

“People seemed to be taking on shorter hikes, which we appreciate with staffing shortages,” he said. “(Poke-O-Moonshine) had 50 cars, which is too many but we did not see a lot of activity deeper into wilderness areas. There was a lot of front country use. People playing on stream banks, relaxing, enjoying the sun. Lots of fishing activity. There were a few people who were pulling campers who didn’t know camping areas were closed, but the issue was mitigated.”

State, county and local officials have recommended people stay home, or hike lesser-trodden trails while social distancing, in an effort to curb the spread of the novel coronavirus.

The DEC has recommended that hikers use lesser-trodden trails and, if hiking in a group, to continue to practice social distancing by staying at least 6 feet away from others. The department has closed all fire towers.

The Adirondack Mountain Club has suspended its Fire Tower Challenge and Northville-Placid Trail Challenge, and has extended the closure of its facilities –including its complex at Heart Lake near Lake Placid –through May 14. The Adirondack 46ers are encouraging hikers to avoid the High Peaks region until Gov. Andrew Cuomo’s New York State on PAUSE order is lifted. The Adirondack Mountain Reserve, which operates the popular trailhead parking lot in St. Huberts across the street from the Roaring Brook trailhead, has reduced the capacity of that trailhead to a maximum of 28 cars.

In an effort to further deter an excess number of people from popular trails, the town of Keene suspended the operations of its Garden trailhead earlier this month. This past Friday, the town also banned roadside parking on Adirondack St., Market St. and Johns Brook Road for the foreseeable future.

“The town of Keene was proactive with signage on its roads around the Garden, which were extremely effective,” van Laer said.

As summertime approaches, the town of Keene plans to put up more no parking signs and barracades where needed.

“Right now, that’s our next step,” Wilson said. “I want to continue to monitor how it’s going. We’ll just have to keep making plans based on what we see happening on the ground and what kind of guidance we get on reopening.”

Before going out for a hike, the DEC asks people to check out backcountry trail conditions at www.dec.ny.gov/outdoor/9198.html and bring appropriate clothing, wayfinding materials and equipment.