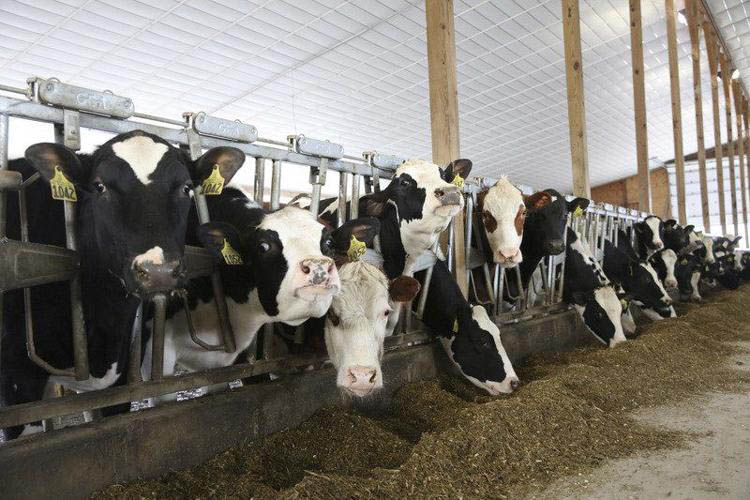 Dairy cows pause while eating to give their best faces for the camera inside the Giroux barn Monday in Beekmantown. (Provided photo — Kayla Breen, Press-Republican)

PLATTSBURGH — After milk flew off the shelves in the initial rush for food during the onset of the COVID-19 outbreak, social distancing regulations set at state and federal levels have caused lower milk prices and dairy surpluses nationwide.

“It went from everybody buying milk in the stores, to empty shelves to now we’re dumping milk,” said Todd Giroux, president of the Clinton County chapter of the New York Farm Bureau.

“We went from having to what looked like one of the best years in a long time, to, in three weeks, just hoping we’ll make it through it.”

The lower demand for dairy products in restaurants and the food service industry as a whole has led to dairy surpluses across the country, including the North Country.

Bill Harrigan, treasurer and member of the board of directors for Agri-Mark, said that while there are still good sales numbers in grocery stores, it’s not nearly enough to replace “the high percentage of the milk market that is lost by the lack of the food service outlet.”

“Prices haven’t dropped to the level where there’s no profit to it, but it’s a matter of how much we’re going to lose and for how long,” Harrigan said. “There’s a fair amount of anxiety.”

Agri-Mark is a regional farmer cooperative best-known for its Cabot and McCadam cheese and dairy products.

While the take-out and delivery only model that restaurants in the state have had to adopt does not present the same demand, Giroux is happy that there is still some demand there.

“We are lucky with what is still being done out there in the food service industry,” Giroux said. “We’re lucky there’s still a lot of pizza being made and the places that are still open are using plenty of product, it just isn’t enough to make up for the sudden stop.”

Giroux said that he has been in touch with both state Assemblyman D. Billy Jones, D-Plattsburgh, and federal Congresswoman Elise Stefanik, R-Schuylerville, in recent weeks to help make sure that the region’s dairy farmers stay on the lawmakers’ radar.

“The Farm Bureau has some initiatives that they’re pushing for at the state and federal levels to try and see whatever we can get, whether it’s direct payments or to reopen the dairy revenue protection program, or whatever it may be,” Giroux said. “I’ve just been pushing and pushing them to not let our government forget us. This is a national disaster. I wish I could say it was tied to one area, but this is huge.”

For now, though, farmers like Giroux and Harrigan will continue to supply the North Country stores with all of the dairy products they could need.

“The milk is still being produced, and dairy products won’t be in short supply,” Harrigan said. “The cows are still being milked every day, and we’re making more than enough milk to meet everybody’s needs.”

And for those who want to help area dairy farmers make it through these trying times, both Harrigan and Giroux agreed on how: buy dairy.

“Keep buying; If you see an empty store shelf, ask when they’re getting it filled,” Giroux said. “At the end of the day, everybody still has to eat, and we’ll do our part to make that happen.”