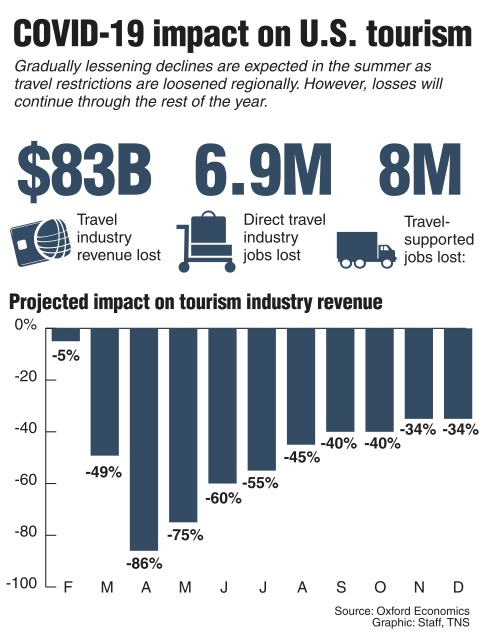 MALONE — Franklin County officials are adopting a go-slow approach to reopening the local economy, even as Gov. Andrew M. Cuomo eyes a region-by-region resumption of some businesses and events.

Cuomo’s plan is contingent on the spread of the COVID-19 novel coronavirus within a region and whether that area has “flattened the curve” on infections. In Franklin County, the rate of infection has been slow, but it is still on an upward trajectory, county Manager Donna Kissane noted Thursday.

Kissane called for moving slowly on reopening the county after Legislator Lindy Ellis, D-Saranac Lake, suggested during a brief video meeting of the county legislature Thursday morning that the county begin considering taking some steps toward that goal.

“We are still on an incline and not a decline,” Kissane said.

As of Thursday morning, the number of confirmed cases of the virus in the county remained at 12 — a number that has not changed in over a week. However, the number of suspected cases — people who had a confirmed primary contact with a known positive individual or an individual exhibiting the signs and symptoms of COVID-19 but had not been tested for the disease — rose to 76 on Thursday from 67 on Monday after having briefly plateaued at 60 Thursday and Friday, Kissane said.

The number of county residents in isolation or quarantine fell to 118 on Thursday from 134 on April 17; the number has been bouncing between the high 80s and the high 130s for the past two weeks. A total of 279 people have tested negative for the virus.

The county Emergency Operations Center, which had been providing daily public briefings on the extent of the infection, has reduced its public releases to two days a week — Tuesdays and Fridays — “unless there is a need to distribute updated information.” Other sources of the information are available, the EOC added.

Kissane said the county has received praise for its approach to the pandemic so far, noting that local leaders adopted social distancing, workforce reductions and other actions to reduce the virus’ spread quickly once the potential danger became apparent.

“I think we got ahead of this early,” she said.

With the weather warming and many people chaffing at being confined to their homes except for necessary trips, officials across the state are being pressured to ease the restrictions. Protests against Cuomo’s decision to extend his New York State on PAUSE executive order to May 15 have taken place in several locations, including Watertown and Albany.

The organizers of some of the larger social events planned for the area later in the year are moving forward with preparations for their events, with the knowledge that circumstances could force their ultimate cancellation.

“I think it behooves us to plan,” said Malone Chamber of Commerce President Mary Scharf. “We’ve got to think there’s a future.”

The chamber sponsors multiple events throughout the summer, including Summer Fest, Concerts in the Park and Harvest Fest — all slated for Arsenal Green — and a planned fly-in at the Malone-Dufort Airport. Putting on these types of events requires a great deal of advance planning, so work must continue despite the uncertainty, Scharf said.

“It is much easier to cancel than to try to create an event at the last minute,” she said.

Because of its planned June 13 date, Summer Fest could become a casualty of an extension of the PAUSE order, she said. But with Concerts in the Park scheduled for July, the fly-in set for August and Harvest Fest planned for September, Scharf said she is hopeful the events will be able to go on.

“I think people are going to need stuff like that” once they are allowed to gather again, she added.

Planning for another major event scheduled for August — the 170th edition of the Franklin County Fair — continues, although fair directors are closely watching other county fairs and the New York State Fair, said Andrea Dumas, a member of the fair board.

“Every week is week by week,” Dumas said, noting that the local fair already has $300,000 in commitments for entertainment and the midway and could need state help if forced to cancel its existing contracts.

One event that has added to the local economy, the biennial Hendrickson Hatch Fly Fishing Tournament, has been called off for this year. The tournament had been scheduled for May 30-31, but with the PAUSE order in effect until at least May 15, the sponsoring Malone Revitalization Foundation pulled the plug earlier this week.

The tournament has been rescheduled to next year.