Will Rogers keeps residents in apartments; Elderwood: One COVID patient in North Creek 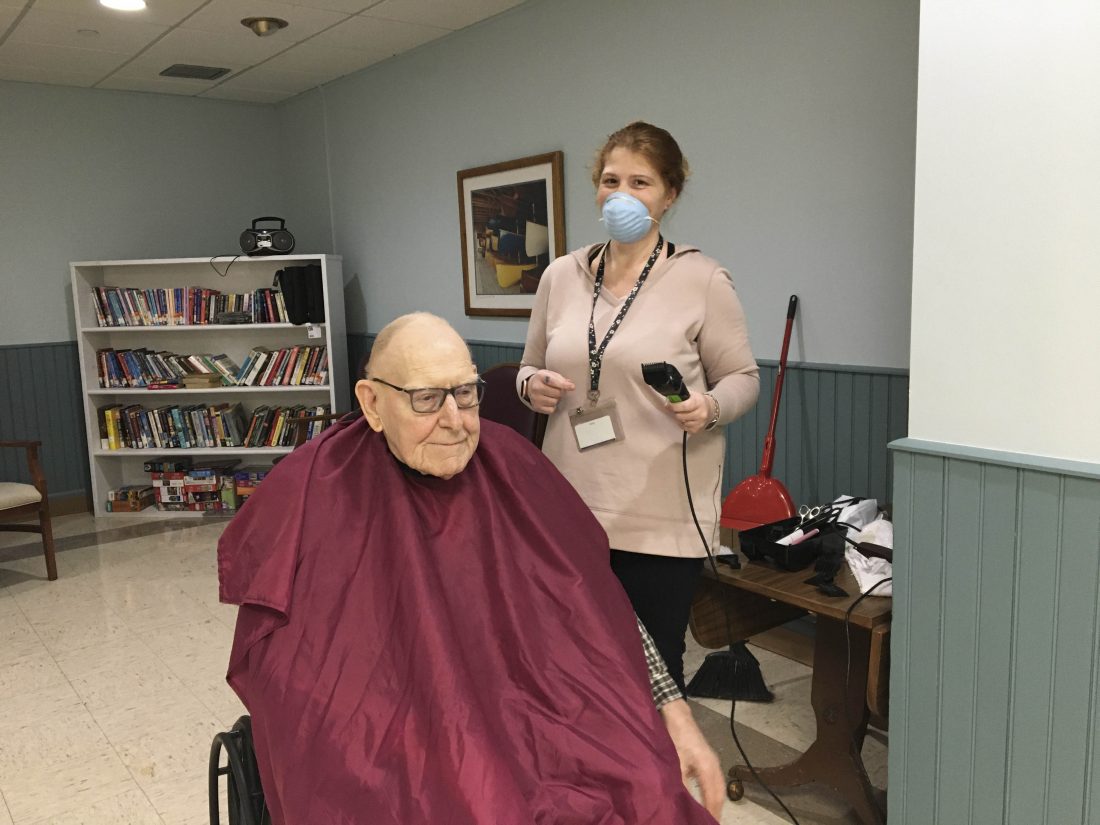 Mercy Living Center staff member Christina Charland prepares to give resident Harry Bourquin a haircut. As the nursing home is not allowing in vendors, including stylists, during the coronavirus pandemic, some staff have added the role of hairdresser. (Provided photo — Jess Collier, Adirondack Health)

SARANAC LAKE — Although the Saranac Village at Will Rogers elder residence has no confirmed cases of COVID-19 in its staff or residents, the facility issued a shelter-in-place order for the senior citizens it houses on Wednesday, as a precautionary measure.

Jamie Whidden, Will Rogers’ executive director, said administration learned someone who had been in the building on Monday had been in contact with another person who had tested positive for the disease the day before.

“While not required by the CDC (U.S. Centers for Disease Control and Prevention) or by public health officials, we want to go the extra mile to protect the residents here,” Whidden said. “We want to look back at this time and know took every step possible.”

He said he has seen how the COVID-19 coronavirus has spread through other elder care facilities around the state and country, sometimes leading to dozens of deaths, so he wanted to go “above and beyond” the CDC guidelines.

Will Rogers residents are ordered to stay in apartments until May 4, when the quarantine for the person who had contact with the infected person will end. This person has not been tested yet, after coming into contact with a positive individual, but Whidden said that person’s eventual diagnosis will inform future decisions.

“If the test result comes back negative for this person, we will be able to resume communal activities and residents will be able to leave their apartments again,” Whidden wrote in an email to residents and their families.

He said the window visitation program Will Rogers had set up is temporarily suspended, since everyone comes to the same chair to talk. Whidden encouraged people to call friends and family living there, to keep them connected.

He said the activities staff are bringing residents crossword puzzles, planning art contests and may even get a game of “telephone” going, over the telephone. He said residents have cooperated with the new orders well.

Whidden said the facility has sufficient personal protective equipment for this level of care, with employees and the community making them many homemade masks.

Whidden said Tom Broderick from Northwood School 3D-printed 14 plastic face shields for Will Rogers, but they are not in play yet as there are no confirmed cases.

He said the facility is not accepting new residents at this time. It is connecting with interested people and giving them video tours, but move-in dates are up in the air.

Whidden said any Will Rogers resident who goes to the hospital — three have gone for non-COVID-19 reasons — is quarantined for 14 days afterward.

Natalie Leduc, a self-described “90-year-old Saranac Lake native” who lives at Will Rogers, said the village has been though similar health crises before. When she was growing up, tuberculosis was sending people from all over to cure in Saranac Lake. She also remembered polio sweeping the area in the 1940s. It wasn’t a pandemic, but it was still “scary as hell.” She said her parents wouldn’t let her go anywhere.

Still, “I’m not used to being locked up,” she said.

Leduc is glad no one is sick, but she said the quarantine means she spends some days just looking out the window. She said the staff have made the change very bearable, though.

On Monday, before the quarantine, Whidden told the Enterprise about life inside the facility. He said some residents were staying in their apartments more and that staff were meeting them to give them activities and exercises, but that most were encouraged to come out and participate in activities.

They were going on socially distant walks, watching educational videos — this month is on Antarctica — on a big screen in the dining room, and playing Scrabble with altered rules so pieces are not being passed around.

The Elderwood of Uihlein in Lake Placid nursing home is one of 35 Elderwood senior living facilities in New York, Vermont and Rhode Island. Chuck Hayes, Elderwood’s vice president of marketing and communications, said that of the four facilities in its North Country group — Lake Placid, North Creek, Ticonderoga and Burlington, Vermont — it has had only one person diagnosed with COVID-19, coming from a hospital to the North Creek location. That person is now in recovery, Hayes said.

He said Elderwood’s facilities are open for admissions, and the state has dictated that they cannot refuse admissions based solely on a COVID-19 diagnosis. He said when they accept someone whom they know has the coronavirus, they take a planned approach to keep it from spreading.

Hayes said staff are wearing their required PPE, and that though supply numbers have been “a bit of a strain,” they’ve been able to manage supplies and are “not desperate.”

He said many masks and gloves have been donated to Elderwood’s offices in Buffalo and make their way to the North Country.

As for the residents, Hayes said, “These people are treasures, they’ve lived through a lot of adversity in their lifetimes, whether it be world wars or great depressions. They’re a resilient bunch.”

Mercy Living Center in Tupper Lake has no cases of COVID-19 among its staff or residents, according to Matt Scollin, spokesman for Adirondack Health, which owns and runs the nursing home. Mercy has stopped all new admissions during this time, so it cannot be forced to admit COVID-19 patients.

Scollin said the facility’s rules are still the same, requiring staff to wear PPE and blocking visitations. He said family and friends are staying in contact with residents through regularly scheduled calls.

“It’s really important, and I’m really, really happy that we’re able to help with that,” Mercy Activities Director Jamie Reynolds said. “The families need to see their loved one and hear their voice and be reassured that everything is okay with them.”

An article written by Adirondack Health staff member Jess Collier told how Reynolds helped one resident do a video call with his wife, who lives nearby and would normally visit every day.

“The wife asked him to sing her a song, and he sang ‘Let Me Call You Sweetheart’ to her and she joined in,” Collier wrote. “It was a beautiful moment that Jamie felt lucky to have been able to witness.”

Residents are still getting together for group exercise every day, with groups limited to six or seven instead of 15, or one-on-one visits with staff.

The article also said staff are increasing how often they visit residents with a snack and drink cart.

“This activity is more about giving the residents opportunities for one-on-one time with staff than anything else,” Collier wrote.

She also said that since stylists from local salons can’t come in to cut residents’ hair, employees have had to learn to do it themselves.

“Jamie, one of the two staffers who have added hair stylist to their resumes, said she really enjoys this new task,” Collier wrote.

On Wednesday for the first time, staff held a livestreamed show with Lou Allen, a regular musician at Mercy.

“Normally around 25 people would gather to watch Lou, so he’s going to try to stream twice a month so different residents get a chance to watch him,” Collier wrote. “And now that the mechanics of it have been worked out, staff plan to work with other musicians to bring them in digitally, too.”

She also said community members can pitch in to brighten residents’ day by sending messages to adirondackhealth.org/send-a-message with a note, photo or drawing.