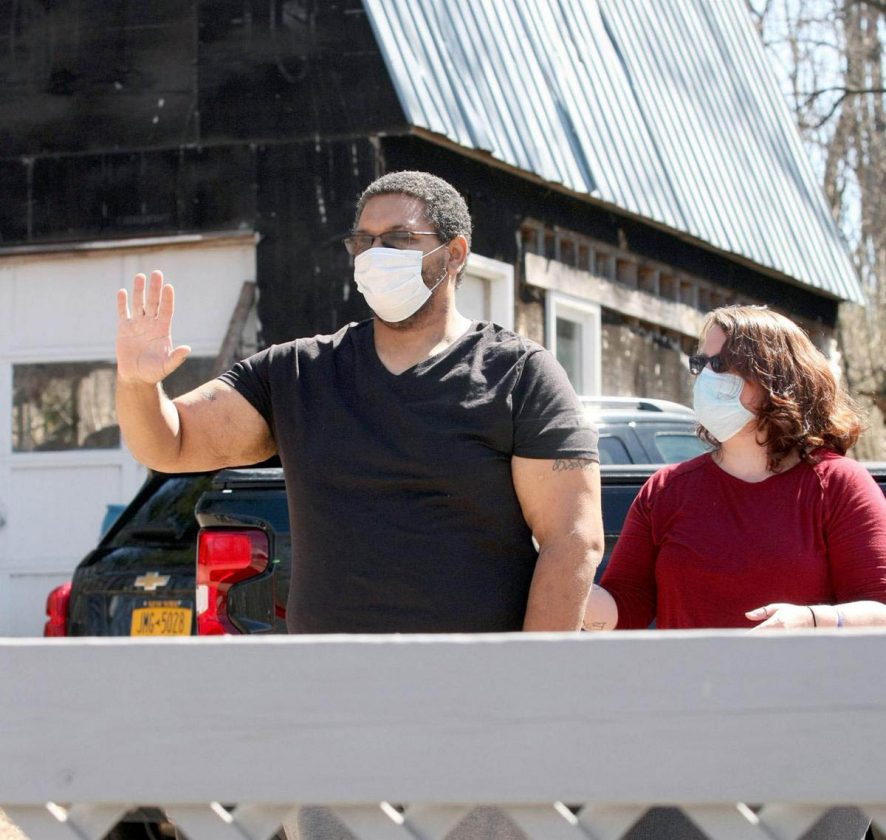 With his wife Justine at his side, COVID-19 patient Andy Hastings waves to a group of people gathered at the end of his driveway upon his return home from the hospital after a lengthy stay. Hastings was surprised by an escort to his Dickinson Center residence by fire trucks from both the Dickinson and St. Regis Falls fire departments. (Provided photo — John Gokey, Malone Telegram)

DICKINSON CENTER — There’s no place like home — especially after spending 21 days in the hospital, 18 of them in the intensive care unit and 13 on a ventilator — after testing positive for the COVID-19 virus.

Dickinson Center resident Andy Hastings — a member of the Dickinson Volunteer Fire Department, the St. Regis Falls Rescue Squad and a Dickinson fire commissioner — was pleasantly surprised by the welcome he received at the Dickinson/Bangor town line.

Four trucks from the Dickinson fire department and one from St. Regis Falls staged on the Louey Road and awaited his arrival. Hastings, who was driven from Champlain Valley Physicians Hospital in Plattsburgh by his wife Justine, was “surprisingly overwhelmed” when his wife slowed down to nearly a full stop on state Route 11B as the parade of fire trucks sounded air horns and sirens to welcome home their comrade, friend and neighbor as they pulled off the side road.

“I was very surprised at the sight,” Hastings said as he stood with his wife approximately 15 feet away from the end of his driveway after the escort home concluded with a cheering and applauding group of 25 or so friends and fellow fire department personnel stationed near the roadside, some with signs.

Along the drive through Dickinson, well-wishers lined up at various points along both sides of state Route 11B, some with signs, one with a re-colored American flag displayed to pay tribute to law enforcement agents, while others waved as the couple passed by, with others sounding their vehicle horns.

Hastings is a corrections officer at the Federal Correctional Institute in Ray Brook, where he is believed to have contracted the virus. Another officer in that facility has also tested positive.

“It’s been a long, tough stretch, but I am glad to be home,” he said, pausing for a breath. “I have another test result coming tomorrow (Friday), and I have to stay in quarantine at home for another seven to 14 days. But anything beats being in the hospital.”

Justine also pointed out that the medical care he received at CVPH was tops.

“He is very fortunate. That was an amazing group of people taking care of him at CVPH,” stated Justine.

Andy began showing symptoms of the coronavirus — including a high fever — on March 24 and was tested for the coronavirus on March 26, according to a Facebook page set up by his sister-in-law Lisa Jimenez. The test results he received two days later confirmed his infection.

He and Justine began what was supposed to be a 14-day quarantine, but on April 1, his breathing became labored and his fever spiked to 104.3 degrees, Jimenez wrote. He was taken by ambulance to the Alice Hyde Medical Center in Malone and transferred just a few hours later to CVPH, where he was intubated and placed on a ventilator.

Over the course of the next three weeks — much of that time in a medically induced coma — Andy suffered kidney problems that forced him to undergo dialysis and some heart issues. But he was removed from the ventilator on April 14 and four days later was able to stand with the aid of a walker.

Andy and Justine, who completed her 14-day quarantine a week ago, stood outside in the sunshine for a little while longer talking — at a distance — with the throng of supporters, then turned and walked slowly to the house with children, waving so-long to the folks outside who sent him in with another round of applause.