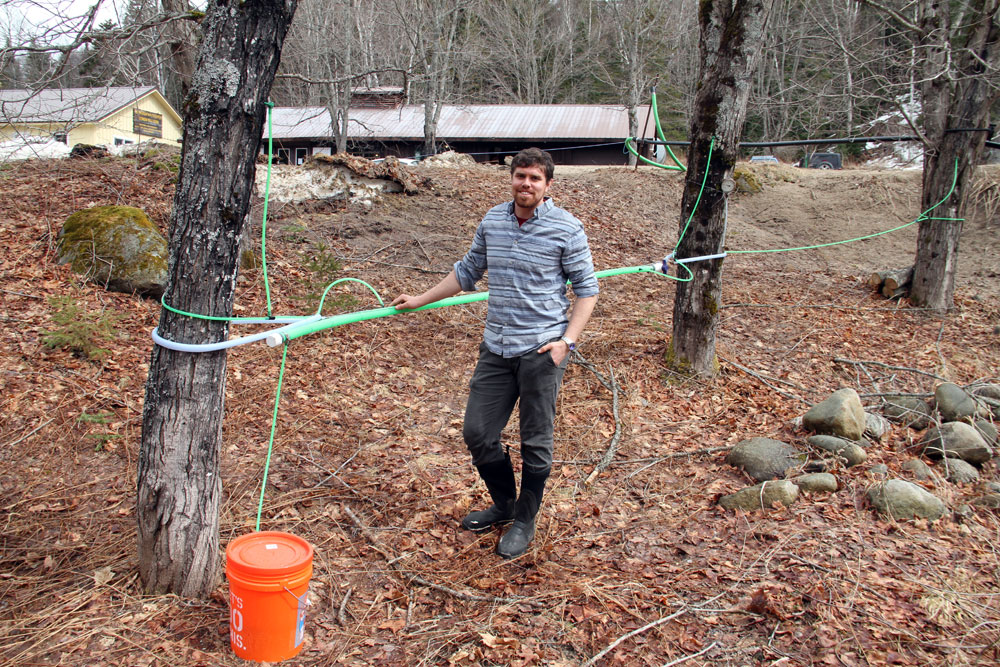 LAKE PLACID — Since the New York State Maple Producers’ Association canceled the Maple Weekends — March 21-22 and March 28-29 — and the state government has issued public assembly restrictions and social-distancing guidelines due to the coronavirus pandemic, residents and tourists have been unable to visit maple syrup producers around the state for tours.

So here’s a virtual tour.

On Friday, March 20 — the first full day of spring — the Lake Placid News took a tour of Cornell University’s Uihlein Maple Research Forest on Bear Cub Lane in Lake Placid with Director Adam Wild (using the social-distancing standard of staying 6 feet away from each other). And he explained how the facility operates.

In maple syrup production, there seems to be a law of 40. Sugar maple trees are usually tapped when they are at least 40 years old. Sap runs when the temperature is more than 40 degrees Fahrenheit. And it takes 40 gallons of maple sap to make one gallon of syrup. 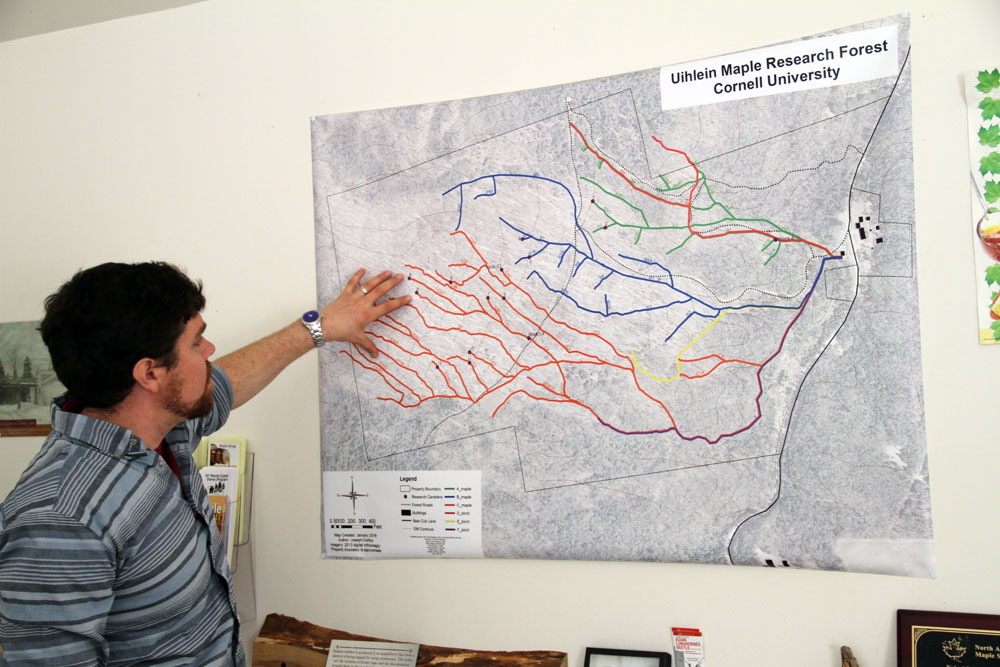 In 1965, Henry and Mildred Uihlein of Heaven Hill Farm up the road donated land to Cornell University to be used for maple syrup research. Wild an his crew use about 150 of the 200-plus acres to tap more than 6,000 sugar maple trees, as well as some birch trees for birch syrup.

While the facility produces maple syrup for sale, the crew also collects data from research stations around the property at least once a day. Research includes tapping with different types of tubing, tapping at different times of the year, going back and retapping, and trying different spouts and different forest management practices.

“All very applied research that we can use to educate other maple producers and try to promote and continue to grow the maple syrup production across New York state,” Wild said.

The facility is self-funded through grants and proceeds from selling the syrup. 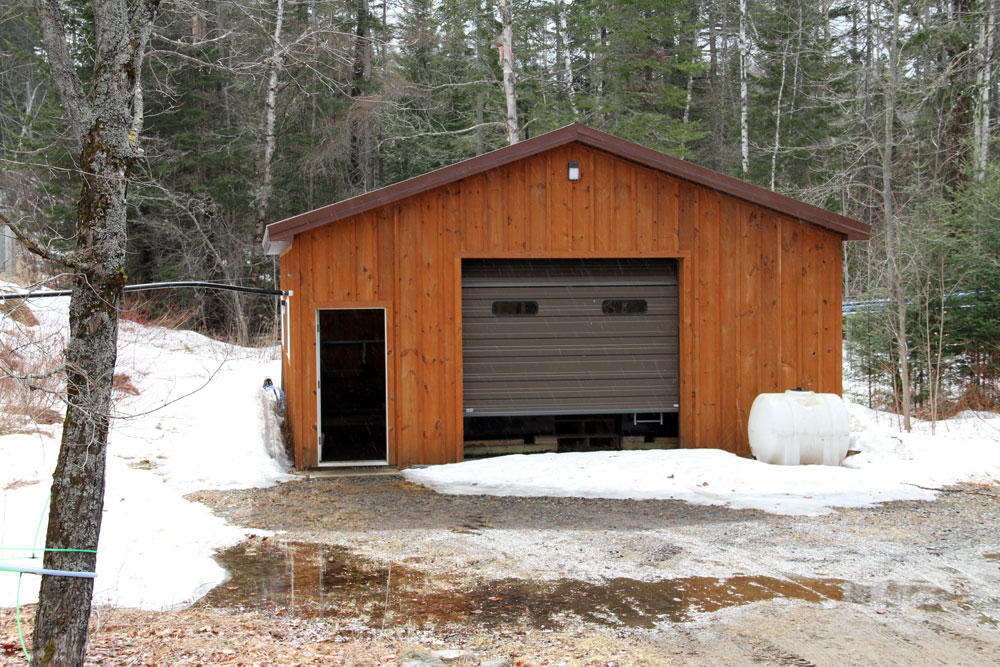 “We also have a large wholesale account to sell our syrup to a restaurant group down in Washington, D.C., so we ship monthly large shipments down there,” he said. “They actually buy the majority of our maple syrup, which is great that it gets it out of the Adirondacks and promotes the Adirondack maple syrup to other parts of the country.”

Across the road from the sugarhouse, Wild walked through mud puddles created by rain and melting snow to the sap house, which is essentially a one-car garage used to collect the sap from a broad network of plastic tubing lines. A series of large, blue tubes converge at the back of the sap house.

Inside, walking past two 3,000-gallon sap tanks on the right, Wild points to two very loud vacuum pumps, running nonstop, on a concrete slab in the back left-hand corner of the sap house. 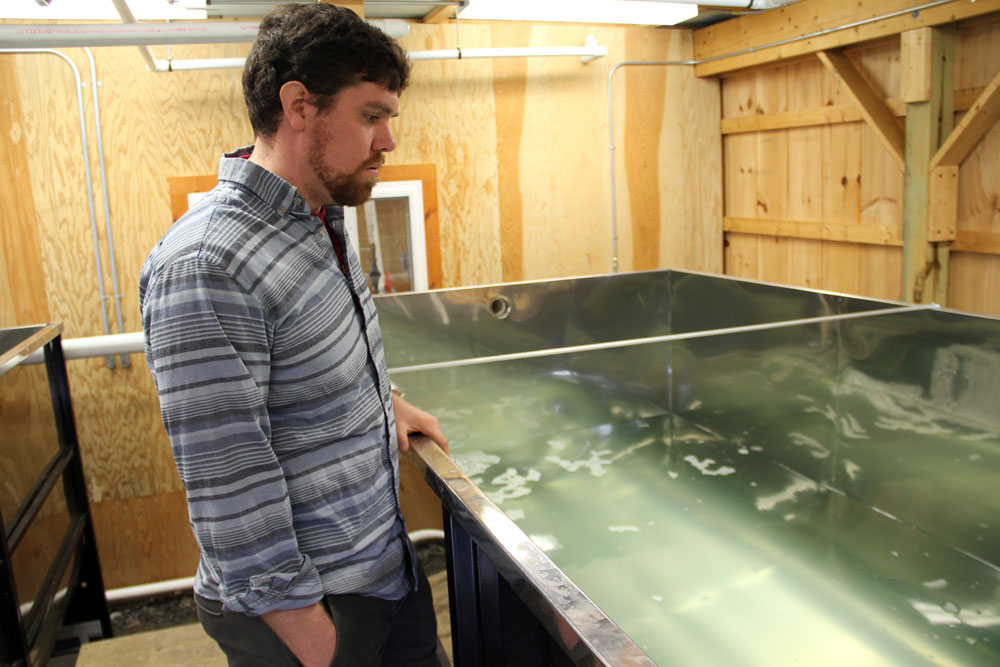 By using the vacuum pumps, Wild said he can double the production of his operation. Yet he’s always on the lookout for air leaks in the system, which make it less efficient. Leaks can be caused by a variety of problems, including trees falling on tubing lines, which happened during a windstorm the week before.

Walking the lines is essential to find air leaks and make repairs. He listens for air hissing and has a monitoring system with sensor boxes at the end of some of the main lines that record the sap volume and temperature.

“And then we can log right onto our phones or onto our tablet, and we can know what the vacuum level is in certain regions,” he said.

This way, leaks can be found quickly and isolated. 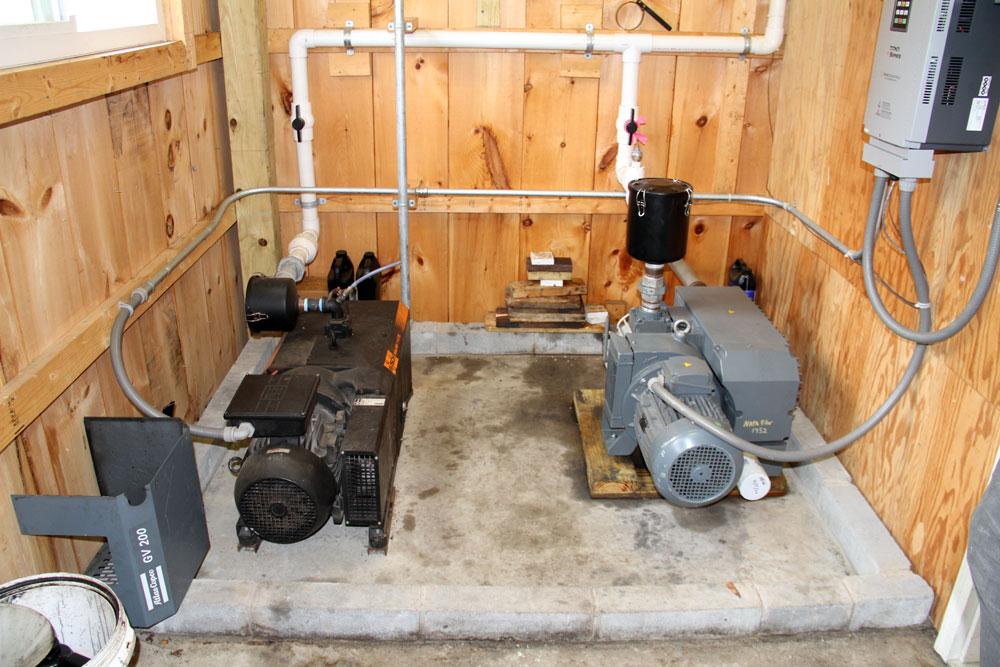 “Our biggest culprit of creating air leaks is actually little squirrels chewing tiny holes into our tubing lines,” Wild said. “I even found (one) from a woodpecker that tapped a little hole into one of my spouts last week and created an air leak.”

In a small room to the right of the vacuum pumps is where the sap comes into the back of the building, through white PVC pipes and into a series of light blue canisters with glass dome tops, a few feet tall. They are called releasers because they release the sap from the suction, preventing it from going through the pumps and keeping the air pressure intact. Three of the releasers are used for maple sap, and three are used for birch sap.

“I like to think they’re almost like the dirt-collection cup on a vacuum cleaner,” Wild said. “And here, the sap that’s coming in is heavy, so it falls down.”

When the sap in each releaser reaches a certain height, a blue float triggers a sump pump inside to turn on.

“And it sucks the sap up through a line and into our tanks,” he said. 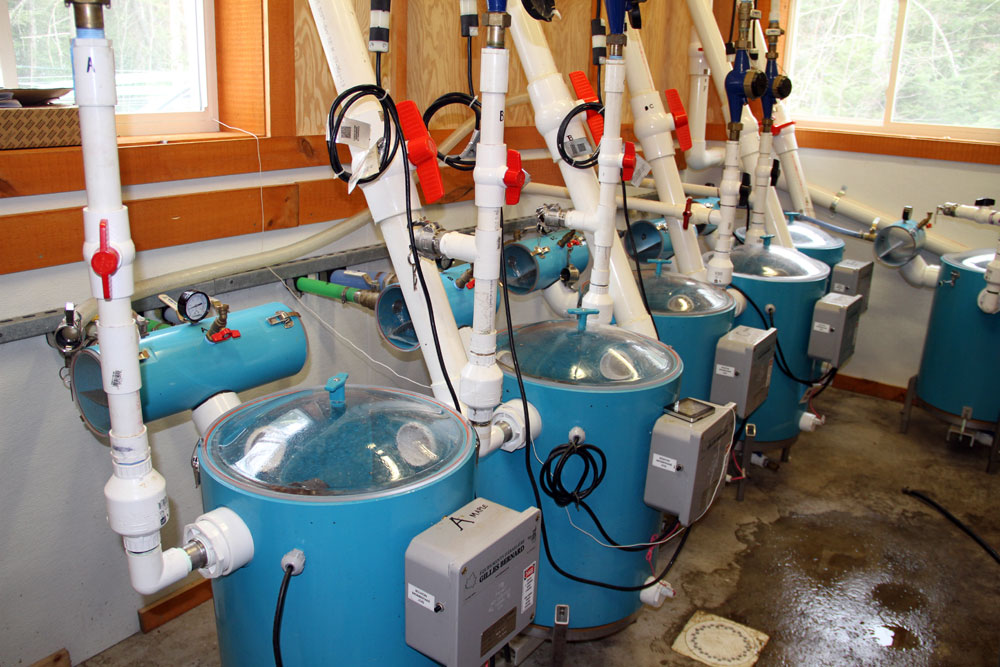 When Wild and his crew are ready to make maple syrup, valves are opened at the bottom of the tanks, and the sap begins its journey through a line under the road to the sugarhouse.

“We actually pump it through a cloth filter to remove any sediment or debris that’s within that sap,” Wild said. “We also pass it through a UV light to kill off any bacteria or help slow that down. Sap has sugars. It has amino acids. It has different nutrients, minerals, and bacteria loves to feed on that. … So if we don’t process that sap within a day or two, that sap can actually go bad.”

The sap is collected at the sugarhouse in a tank behind the building. It is then processed through a reverse osmosis machine, removing most of the water from the sap to speed up the boiling.

“If we take that raw sap and put it into our evaporator and just heat it and evaporate off all the water, which is the traditional method, that could take hours and hours to do that,” Wild said.

Membranes with tiny openings are large enough for the water molecules to be pushed through, “but the sugars and minerals are all bigger, so they don’t pass through that membrane.”

The end result is concentrated sap. The reverse osmosis machine will take sap with a sugar content of 2.4% and turn it into concentrate of up to 15% sugar.

The concentrated sap is then pumped into tanks in the loft of the sugarhouse before it is fed below into the evaporator.

“This is our main operation where the magic happens,” Wild said.

The evaporator uses fuel oil, which is more energy efficient than a traditional wood-fired burner and saves time and money. Wild said it’s the difference between spending $7 on fuel to boil a gallon of syrup and 75 cents.

When the sap enters the back of the evaporator, it begins boiling in what’s called the flue pan.

“It has all these channels and ridges,” Wild said. “It’s really just these 1-inch-wide channels that are a foot tall. So instead of a giant pot of water that I’ve got to wait forever to boil, this can be boiling really quickly.”

The sap can be boiling within 5 to 10 minutes.

Before the sap reaches the flue pan, it travels through stainless steel piping in the hood of the evaporator, and the steam heats it to about 160 degrees.

“So we’re utilizing that energy of the steam that would typically just go up through our cupola in the top of our sugarhouse,” Wild said.

This is a continuous-flow evaporator, with new sap automatically added to the back of the machine as the syrup flows out the front.

“So as it’s getting more and more dense, it’s going to naturally move forward, and as we add less dense sap, it pushes that more dense, almost syrup, forward into our front pans,” Wild said.

As the thicker sap snakes through the channels in the front pans, it gets more heat contact.

“And that’s where the flavor comes into the syrup because a lot of maple syrup flavor is actually caramelization of sugars through this cooking process,” Wild said. “And we’re going to draw it off when it is around 66% sugar.”

The New York state maple syrup standard is between 66 and 68.9% sugar, he said.

When the syrup hits 66% sugar — and the temperature is just right — the syrup is automatically drawn off into a metal barrel on the side of the evaporator. Wild and his crew can produce about 50 gallons per hour.

The syrup is filtered to remove sugar sand (niter) and stored in 40-gallon stainless steel drums until is needed. Throughout the year, when they need to resupply their shelves, the syrup is pumped into a canning unit where it is heated to 180 degrees — sterilizing it — before being placed in individual containers.

The syrup is available for sale inside the visitor center (currently closed) or in the self-service box in front of the sugarhouse. 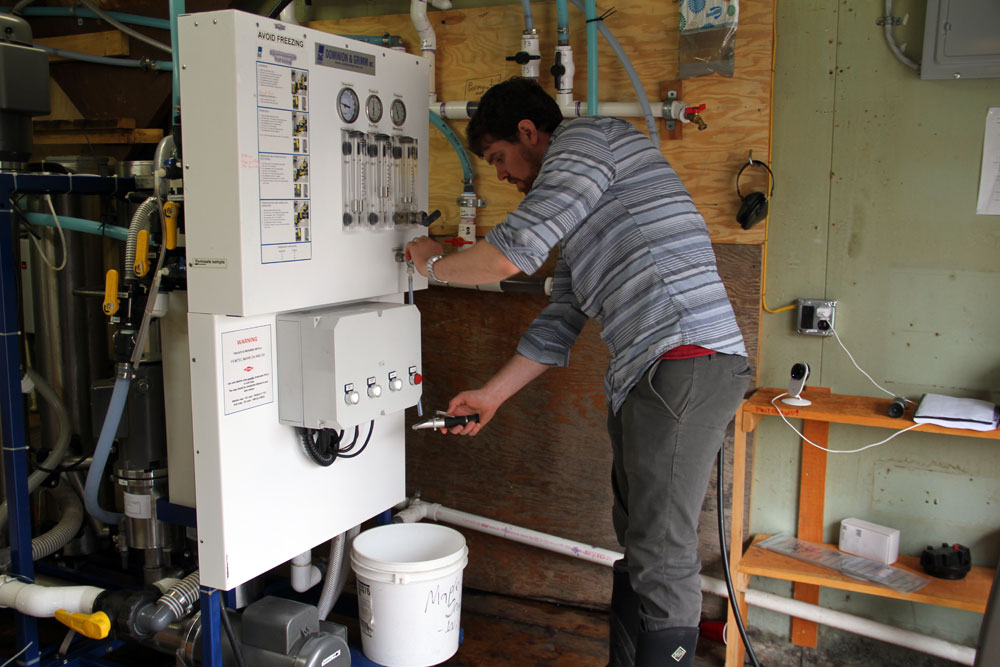 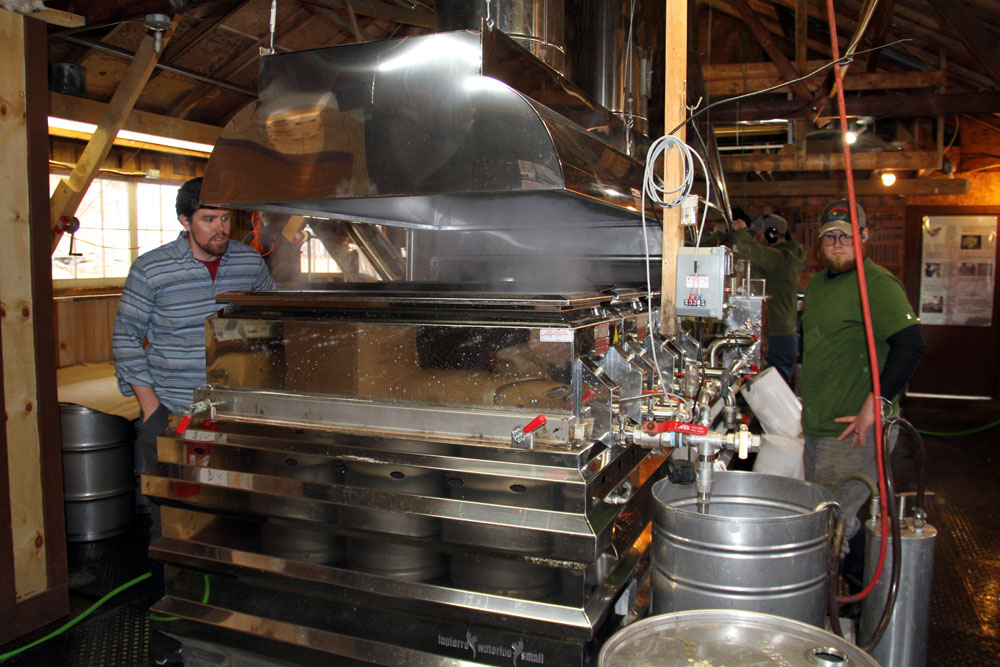 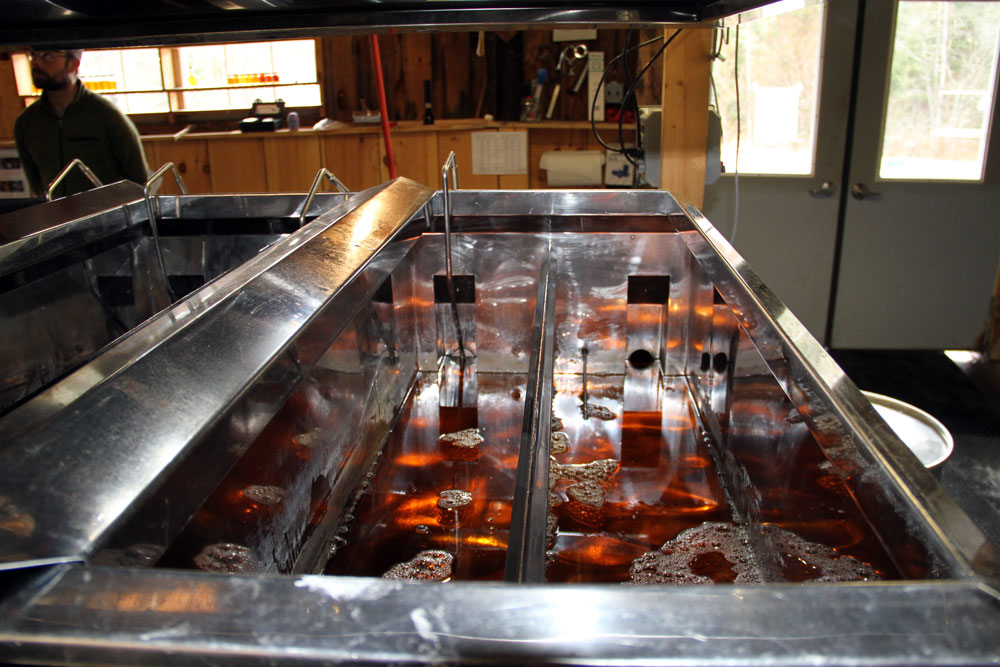 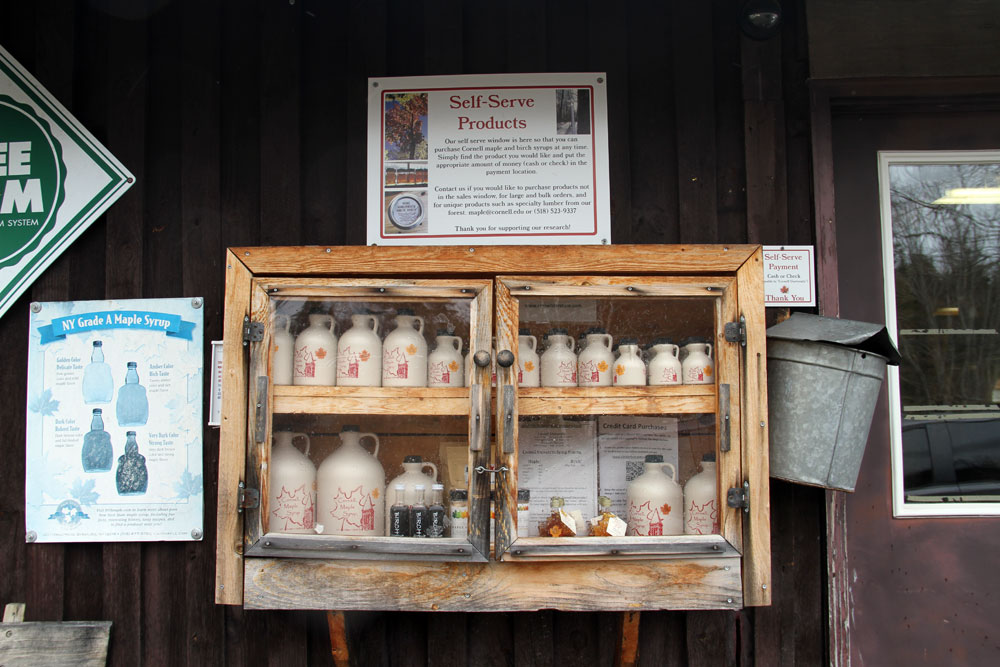