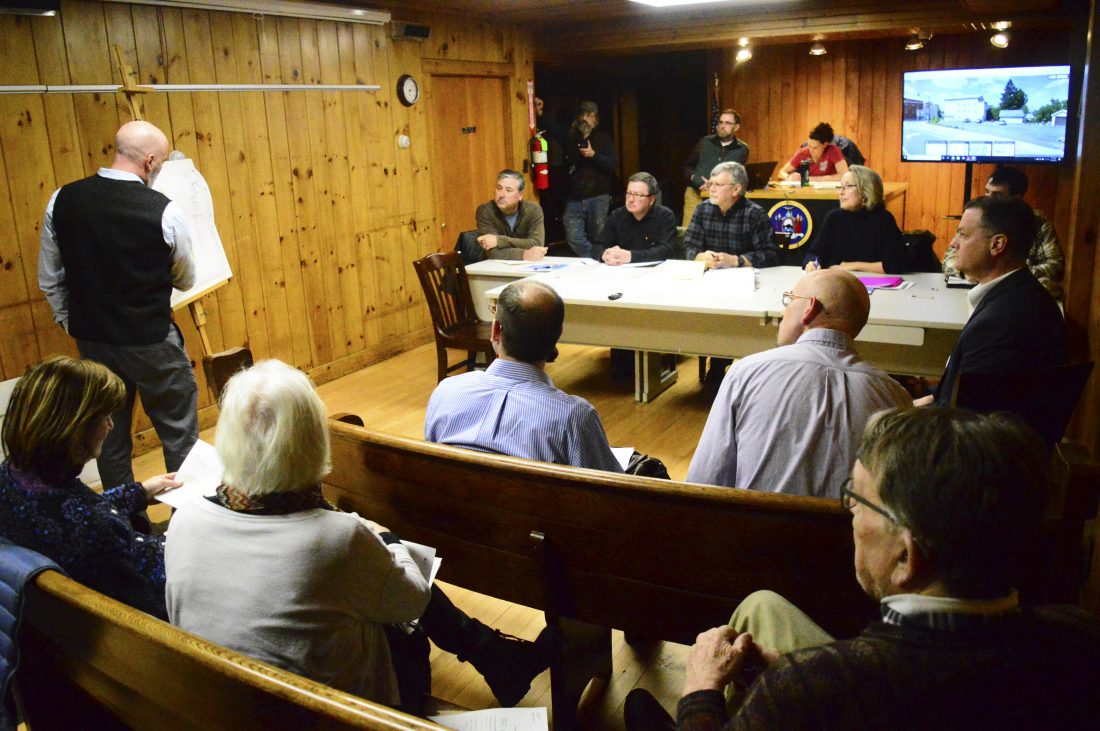 Andy Allison, from the Glens Falls firm AJA Architecture and Planning, shows off blueprints for the Crossroads Hotel to the Tupper Lake Joint Planning Board. (Enterprise photo — Aaron Cerbone)

TUPPER LAKE — The developers and designers of the Crossroads Hotel gave a presentation of the combination hotel-restaurant-bar they plan to build on the corner of Mill and Park Street to the Joint Planning Board Feb. 26.

The designers said the two main issues they need to address are the height of the building and parking for its three businesses. Board members were most focused on the lack of parking in that area of town and trying to secure a second-story balcony which was cut since the initial presentation of plans last summer.

Members peppered the designers with questions at the meeting but were mostly positive about the plans they saw for the “boutique hotel” to be developed by Betsy Lowe and Nancy Howard.

Jacob Wright from Skyward Hospitality, the same company building the Saranac Waterfront Lodge in Saranac Lake, said they were presenting to the board to give them more concrete plans for the proposed building and to learn of any “deal-breakers” to avoid.

The village Zoning Board of Appeals is the board that will actually approve variances and has the last word on deal-breakers, but the planning board can choose to give an unofficial recommendation if it likes the project.

Andy Allison, from the Glens Falls firm AJA Architecture and Planning, said the outside walls and footprint of the building have been set, though the interior plans are largely unfinished. He said they tried to fit a lot in a small building to save space for parking.

Still, there is not much room for parking on the little island of land Crossroads LLC owns between Park and Lake Street in the first place.

The hotel will apply for a variance to allow a .75-to-1 ratio of parking spaces-to-guests instead of the usual one-to-one requirement. Saranac Lake locations also have a .75-to-1 parking ratio.

The hotel will also have fewer than one parking spot for every two employees. With 22 employees, that means 11 spots are needed, but the plans account for six, because employees work in opposite shifts.

There are a total of 38 parking spaces planned, with 32 of those servicing the hotel’s 42 units. This means there will be street parking only for the bar-restaurant. The designers pointed out that other restaurants in the area don’t have parking either. They said every town with an urban core deals with this, but it is new to Tupper Lake.

They also said they anticipate the hotel will be 100% at capacity 60 days a year.

Still, board members were very concerned over street parking and running out of spaces.

He said there is already a lack of parking.

The designers said there is not much they can do to remedy this as the property is blocked in on all sides in the center of town. They said building underground parking or a parking garage would be too expensive.

Planning board Chairman Shawn Stuart said he wants to see some parking alternatives. He was adamant that they have a plan for overflow parking.

The idea of valet parking was considered.

The designers said they are working on the “urban philosophy of street parking” and that people will have to walk around town to get there.

They said Lowe and Howard were fortunate to acquire six parcels of land connecting Park and Lake Streets. This allows them to have two entrances, one on each major road. The entrance on Park Street will be a one-way, because pulling out there would hinder traffic significantly. The Lake Street entrance will have an entrance and exit.

The developers will seek to condense these six parcels of land into one in a “reverse subdivision.”

Stuart spoke highly of the hotel itself, saying it is a great building in a great location and that he loves to see it coming together. There was just one problem.

“The front of the building looks nothing like what you came with two months ago,” Stuart said.

The initial sketches and plans showed a second-story porch above the first-story dining area, servicing several meeting rooms. When these meeting rooms were moved to another part of the building, Allison said, the porch was eliminated. He said the initial drawings also had the building several feet taller than it will be in actuality.

Board members, however, said they really like the second-story porch and wanted the designers to try to add it again.

“I was excited for the building with porches,” board member Jim Merrihew said.

Wright said the hotel will need a variance permit for its height. He said he already visited the Adirondack Park Agency informally and that it likely will be granted.

He said the building will have around the same number of stories as most other buildings in the area, and described the process as “painless.”

He also said if the board recommends the project to the APA it helps its chances.

The hotel will feature a restaurant and bar on the corner of Park and Mill streets with outdoor seating. This was one of the main goals Lowe and Howard had when they set out to plan the Crossroads Hotel.

“The idea of creating this restaurant on the corner, with outdoor seating, that could really enliven what is kind of not a lively corner, was really sort of the key thing about this project,” Allison said. “Then it was a matter of ‘OK, but how do you support that thing?’ And it was with overnight stays in guest rooms.”

Wright said the next act will be getting a State Environmental Quality Review conducted by the DEC, which will spark future work.

The APA and state Department of Transportation will also get involved.

Stuart asked that the developers hire Tupper Lake-based attorney Kirk Gagnier as an outside council to look over the plans while going through the legal process.