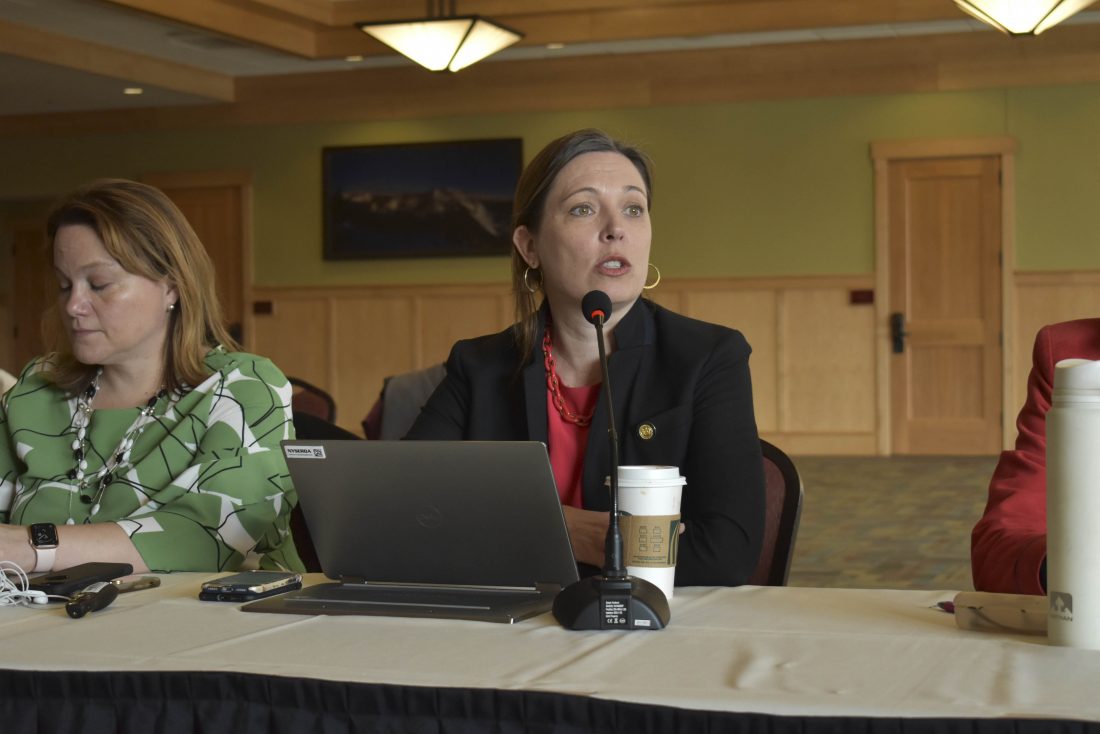 LAKE PLACID — Representatives from more than 30 local organizations gathered at a roundtable discussion in Lake Placid on Monday to outline ways funding from a proposed $3 billion Restore Mother Nature Bond Act could be used to safeguard Adirondack communities from the anticipated impacts of climate change.

The Restore Mother Nature Bond Act — if approved by the state Legislature as part of the 2020-21 state budget — would be subject to voter approval this November. The bond act is part of a $33 billion, five-year plan to fight climate change proposed by Gov. Andrew Cuomo as part of his recent Executive Budget proposal.

If the $3 billion bond act is approved by voters, the state would look to begin selecting projects for funding by winter 2021, according to Alicia Barton, president and CEO of the New York State Energy Research and Development Authority.

As the Legislature hashes out the details of a funding package in Albany, representatives from state agencies are fanning out across the state to host roundtable discussions about ways the funding could be best directed to mitigate flooding, restore fish and wildlife habitats, upgrade drinking water infrastructure and how the state may acquire more land to protect.

“We believe strongly that the Legislature should pass the bond act in the budget when it gets done by April 1,” Barton said Monday. “That’s a big part of why we’re here today and continuing the discussion to get ready for implementing the bond act when we hope and expect it will get included in the state budget.”

Local media outlets were notified of Lake Placid’s roundtable discussion less than two hours in advance of the meeting.

Barton said losses and alterations to the state’s aquatic, terrestrial and coastal habitats have “made us more vulnerable” to the impacts of climate change.

“The actions the state is taking are incredibly broad-based,” she said. “The $33 billon, five-year plan the governor presented at his executive budget address has specific activities and resources that are aimed at taking action to fight climate change.

“The bond act will reduce flooding for vulnerable communities, will help us invest in resilient infrastructure, restore fish and wildlife habitats, preserve open space and enhance recreational opportunities, prepare New York for the impacts of climate change and ensure transformational projects across the state — especially those in vulnerable and disadvantaged communities — can get funded.”

Barton pointed to the installation of riparian forest buffers to protect streams and water bodies, culvert replacements and even wetland habitat restoration in the Lakeview Wildlife Management Area — located in the town of Ellisburg, Jefferson County — as possible projects that could be funded through the Restore Mother Nature Bond Act.

“We have reached a critical moment when it comes to staving off the worst potential impacts of climate change,” she said. “We believe what New York does really not only matters for the future of our state, but it will set an example for other states and other nations to follow, which is critically important when it comes to a global issue like climate change. That’s really what we have ahead of us.”

The last state environmental bond act was passed in 1996.

Keene town Supervisor Joe Pete Wilson, Jr. has been on the frontlines as his town faces a historic level of hiker traffic in the High Peaks region. The town runs its own hiker shuttle and rents trailhead port-a-potties.

He underscored small towns’ need for funding to build green transportation systems to cut down on carbon emissions, and for funding to find alternative options for hiker accommodations such as port-a-potties, which are sometimes placed nearby to water bodies and could impact water quality if blown over.

“I see managing the recreation economy intersecting with this in the need for infrastructure to protect the water, and electric transportation to eliminate emissions,” he said.

He said towns like Wadhams, which hosts a wastewater treatment system that serves just 55 users, face financial hurdles to implementing significant upgrades by virtue of its small tax base.

“How are they going to put in a 1-point-something million dollar upgrade to try to reduce the phosphorus runoff?” Wilson said.

Christopher Rosenquest, a Clinton County legislator who is currently running against five other candidates for Plattsburgh city mayor, said counties should be allowed to purchase “right-sized” transportation options like 10-passenger electric vans rather than larger buses. He also suggested looking into ways to leverage bond act funding to aid affordable housing developments.

Claudia Braymer, a Glens Falls representative on the Warren County Board of Supervisors who is currently running against three other candidates for state Assembly, said local governments face a hurdle in even applying for funding through the Restore Mother Nature Bond Act. She asked that the state build into its project selection process some way to accommodate smaller communities’ limitations.

“Many of our small towns don’t have the resources to even put effort into getting a grant,” she said.

Willie Janeway, executive director of the Adirondack Council, highlighted an administrative structure that was put in place as part of past state bond acts.

“In previous bond acts, a percentage has been allocated for a bond act office, for staff to help facilitate,” he said. “It’s hard for agencies to move increased money out to communities without some increased staff.”

Janeway said the Adirondack Council would like to see the bond act used for clean water projects, managing overuse and helping communities address climate change. He said passing the bond act could also free up money in other places in the state budget for research and planning.

Adirondack Mountain Club Education Director Seth Jones said he sees an opportunity for some of the Restore Mother Nature Bond Act to be directed to sustainable trail projects.

“I see no reason why, in a few years, we can’t have much, much greater organics recycling throughout the state,” he said. “I think we could be way more aggressive with that.”