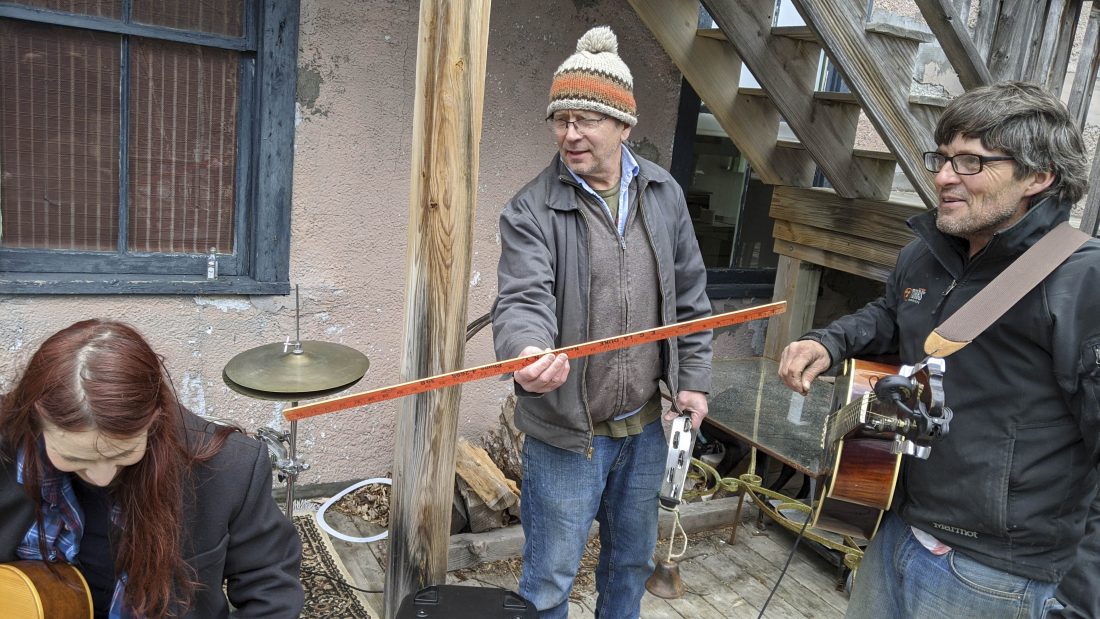 UPPER JAY — The musicians performed outside on the Recovery Lounge’s deck in nearly freezing temperatures. They were all six feet apart — Scott Renderer used a yardstick and his arm to make sure. Disinfectant wipes were taped around the microphones. If they were to start following initiatives to stop the spread of the coronavirus, this was the artists’ last chance to come together and perform.

“We were trying to stay connected through song and story,” Renderer, Recovery Lounge director, said in a phone interview Wednesday. “There was some foot tapping and an elbow bump or two. It was kind of weird because usually you’re doing a lot of hugging when you get together and sing.”

Though spread out, the North Country is full of art events and venues. There is the Waterhole, Lake Flower Landing and BluSeed Studios in Saranac Lake, the Lake Placid Center for the Arts in Lake Placid and the Tupper Arts Center in Tupper Lake.

Ever since state-mandated shutdowns of non-essential businesses and events went into effect Sunday, the future for arts in the Adirondacks has looked uncertain. Renderer said he has events booked until next fall, many of which could be canceled. In the week leading up to mass shutdowns, the Recovery Lounge in Upper Jay seized the final opportunities for togetherness and expression among local artists with its Six Feet Together video series.

“We probably did six or seven individual sessions,” Renderer said. “We’ve got about 15 or 20 songs, and we’ve been uploading a song a day to our YouTube channel.”

The series can be viewed on “ujartcenter” Instagram page or on the “Scott Renderer” YouTube channel. Some of the performers include Drew Sprague, Annie Stoltie, Tyler Dezago and Jim Amirault. Roger Mitchell took a different approach and read some of his original poetry.

One of the performers was Sarah Curtis. She sings in the local swing-jazz group Crackin’ Foxy, waits tables at the Left Bank Cafe in Saranac Lake and works at her mother’s consignment shop, Main Street Exchange. She can’t work any of those gigs right now.

“I had a little bit of savings, so I was all right for a month, but now I’m running out of money, and I’m going to apply for unemployment,” she said. “There’s not a lot else I can do. All my skillsets are working in restaurants.”

Curtis doesn’t have a car, so she was excited when Shamim Allen of the Dust Bunnies invited her to the Recovery Lounge to record music.

“It sounded like the fun and the last opportunity I would have to get out of Saranac Lake for a while,” she said. “At that point, it was St. Paddy’s Day, and things were looking pretty dire.”

Curtis said she was slightly nervous, meeting up with people.

“I knew I was taking a risk, but it was really nice to see people and act like life was normal before everything got shut down. I’ve been home for the last couple of days, so I’m glad I made my last foray into the outside world to do something worthwhile.”

Curtis led a group in performing Ben E. King’s “Stand by Me.” She also played the bodhran while Allen sang an Irish tune.

“I forgot my tipper (drumstick), so Scott gave me a cooking spoon to play with,” she said. “It felt amazing. I felt super-lucky. We were sitting out there with the wind in our faces. There was sun, but it was cold. We could see the bridge and the river, and it was a beautiful view.”

The videos have garnered positive responses on Instagram. Lizzie Wilford commented, “I love this.” Sue Pagano said, “Thank you to Scott for bringing us these lovely gifts of entertainment.”

Eric Klotsko filmed the performances. He said he was happy to be part of something that brought people joy.

“I think a lot of people, certainly myself included, search for something to hold onto while so many other things in the world go seemingly upside down,” he said. “Where there are familiar faces and people that we know and love showing up into our virtual feed, hopefully, that brings an element of comfort. At the very least, it was a cathartic experience.”

Klotsko said the project was spontaneous, and it came together nicely.

“I think we all thought this was going to end sooner than later, so there was a sense of urgency to capture it before the shutdowns,” he said. “Scott had a drive that brought this from concept to laptop in literally 24 hours. We felt the wave coming, and we were trying to get as many sandcastles built as we could.”

Though the world faces major threats that could be life-changing for some, Renderer said he’s trying to look at the bright side.

“I’m sad that we can’t present the musicians right now, and most everybody has been shut down,” he said, “but it’s a good opportunity for me to be spontaneous, which is not something I can usually be with the Recovery Lounge because we have to book in advance and plan whole seasons. I enjoy it as a painter and a writer. I’m able to lock down and take care of some stuff and ideas I haven’t been able to get to. It’s tragic for people’s careers and their health, but these are normally the times when artists and creative types get to work.”