Health officials say washing your hands with soap and water is the best way to stop the spread of infectious diseases such as the COVID-19 coronavirus. Wash for 20 seconds. That’s roughly one round of singing the alphabet song or two rounds of “Happy Birthday.” (Enterprise photo — Griffin Kelly) 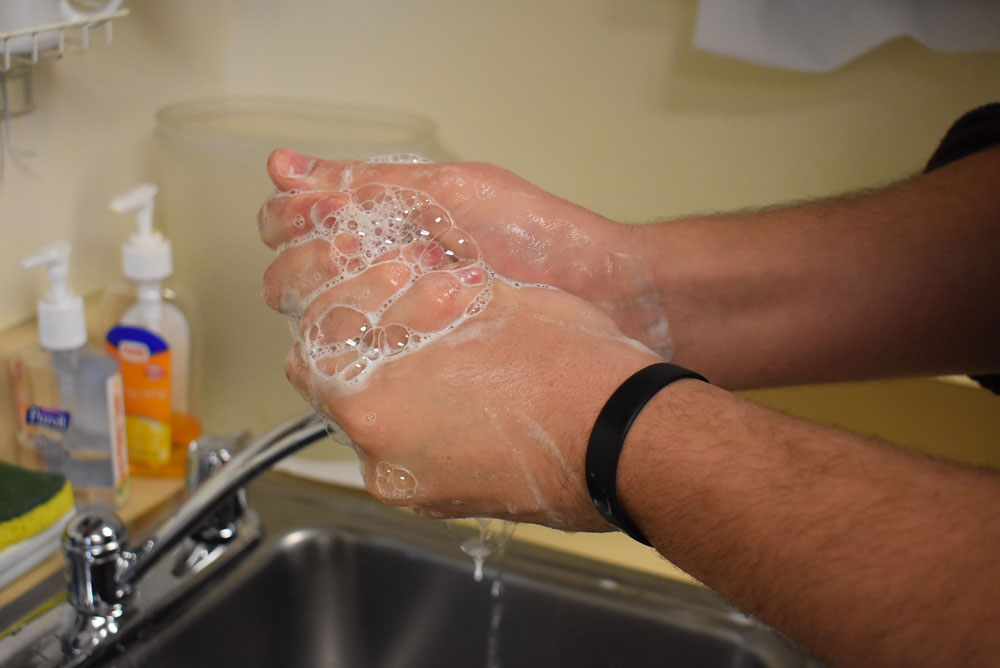 Health officials say washing your hands with soap and water is the best way to stop the spread of infectious diseases such as the COVID-19 coronavirus. Wash for 20 seconds. That’s roughly one round of singing the alphabet song or two rounds of “Happy Birthday.” (Enterprise photo — Griffin Kelly)

SARANAC LAKE — Adirondack Health Medical Director of Infectious Disease Dr. Diana Christensen agrees the novel coronavirus should be taken seriously, but she also wants to explain how it compares to other coronaviruses.

The virus is dangerous, but at this point, previous coronaviruses have been linked to more deaths. The best way to prevent spreading and contracting the virus is to keep your body and surroundings clean. The Adirondack Medical Center is prepared to treat patients, but officials there say home isolation might be best for many who experience symptoms of the new virus. 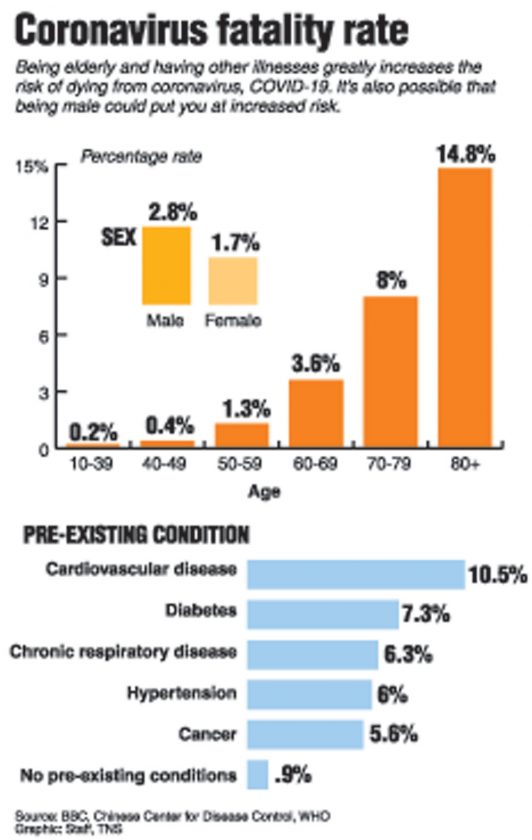 It attacks peoples’ respiratory systems and can lead to symptoms such as shortness of breath, sore throat, cough and fever. Christensen said the illness is different for each patient.

“To some, it’s mild like a common cold, but then you have the other extreme where patients get very sick,” she said. “Usually the incubation period is about four to seven days. When the patient gets sicker, some patients may develop pneumonia and respiratory failure.”

She said those most at risk are the elderly and people with existing conditions that weaken their immune systems such as diabetes, COPD, cancer and heart disease.

“So far, it looks like kids are not having a lot of problems,” she said. “That’s a good thing. In general, if you’re young, healthy and don’t have a compromised immune system, most likely you’ll have mild symptoms.”

Christensen said the preventative measures for COVID-19 are nothing new to infectious diseases; they’re just being stressed more: Frequently wash your hands with soap and water for 20 seconds. Don’t touch your face. Avoid crowded areas. Stay 6 feet away from people. Don’t go to work if you’re sick. Stay hydrated. Sneeze and cough into your elbow.

She said hand sanitizer should contain at least 60% alcohol, but soap and water are the preferred tools for disinfecting your hands. Employees at the Adirondack Medical Center have taken to not shaking hands and instead are bumping elbows.

Christensen said surgical masks are for those who are already sick or those who are treating the sick. She said people shouldn’t go about their daily business with masks if they are not sick because the masks are in short supply.

She said it’s not clear yet how long the virus can live on surfaces, but she recommends keeping things such as doorknobs, phones and countertops sanitary.

“You can use things like Clorox to kill the virus,” she said.

The novel coronavirus originated at a food market with live animals in Wuhan, China, in late 2019. Christensen said it’s believed that the virus passed from an animal to a human and then spread quickly from person to person.

Since then, cases have appeared all over the globe. Italy recently quarantined its entire country. In the U.S., cases have appeared in multiple states including California, Washington and New York. In New York, cases were mainly found in Westchester County and New York City. Cases were also confirmed in Saratoga County and Queensbury, and Gov. Andrew Cuomo declared a state of emergency Saturday.

The state also started producing its own hand sanitizer made by inmates at Great Meadow Correctional Facility in Comstock, Washington County. The sanitizer will be provided free of charge to schools, municipalities, prisons, governmental agencies and high-risk communities.

Locally, Lake Placid is an international travel destination for athletes, foreign travelers and city folks looking for a weekend getaway.

“I think it increases the chance that we may have some cases,” Christensen said.

Adirondack Health Communications Director Matt Scollin said the local health network recently had a proactive meeting with state Olympic Regional Development Authority representatives to discuss COVID-19. He said it was important to make sure the people who are often the welcoming committee for hundreds of athletes and their families have the information to keep people healthy.

Christensen said the coronavirus is spreading quickly, but right now, its impact is not the worst the world has seen.

“This has more cases but less mortality than the prior outbreaks with SARS (2003) and MERS (2012),” she said. “With those outbreaks, fewer patients were infected, but the mortality rate was higher. With (COVID-19) we’re learning every day. The mortality looks like it’s between 1.5% to 2%. It’s believed more people are infected than have been tested, so maybe the mortality will be lower than that.”

She said influenza, which is still a medical threat this time of the year, has also had a higher mortality rate than COVID-19.

Because COVID-19 tests are in short supply nationwide, any test going to a lab requires state approval, according to Scollin. He said people can’t simply walk into an Adirondack Health facility and ask for a COVID-19 test.

“There is a chain of approval that would lead to that testing to be accepted,” he said. “The has to go through the county public health department and then be cleared by the New York State Department of Health before a lab will even accept that test. Otherwise, they would just be subsumed by swabs from every ZIP code in the state.”

“Plus, we don’t want people in the waiting room with symptoms, saying they want to have a test and then maybe transmitting the virus to other patients,” Christensen added.

She said the diagnosis test is either nasal or throat swab, but labs are asking for blood, urine and stool samples to better research the virus. She said it takes about three days before results come back.

There is no vaccine or specific treatment yet for the virus. It just needs to run its course. Christensen said generally healthy people showing mild symptoms of COVID-19 should isolate themselves at home for 14 days. The symptoms might go away within a week, but those with the virus are still capable of transmitting it to other people after they start to feel better.

However, if people do need medical attention, AMC has multiple isolation rooms set up for those patients.

The hospital also uses a Surfacide UV light machine to clean every room.

“It’s shown to be 99.999% effective at killing coronavirus and lots of other things,” Scollin said.

If people feel like they must go to AMC, they’re asked to call first and come to the ambulance bay doors, not the lobby.

At the hospital, a patient might be put on an oxygen machine or IV fluids for support.

People can also call the state Department of Health at 1-888-364-3065 if they have any more questions on testing and treatment.

Christensen said it’s difficult to say when the number of COVID-19 infections will begin to decrease. Unlike the flu, which is usually strongest in the winter, she thinks COVID-19 cases could last beyond the summer.

“I think at this time, we’re still in the peak of the outbreak,” she said. “Every day you hear news of more cases. I think the cases are going to go up before the summertime and then hopefully, with these measures, will start going down.”