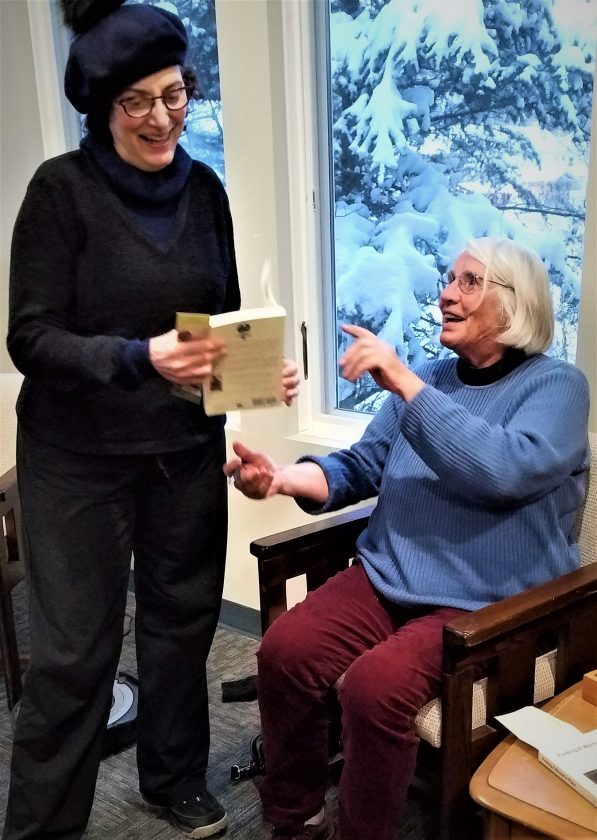 Lorraine Duval, right, talks about one of her books with another woman in Keene Valley. (Photo provided)

SARANAC LAKE — The Village Mercantile (formerly The Community Store) will be hosting Keene resident Lorraine Duvall for a book signing and a meet and greet on Saturday, March 21 from noon until 2 p.m.

Duvall’s two previous books, “And I Know Too Much to Pretend” and “In Praise of Quiet Waters: Finding Solitude and Adventures in the Wild Adirondacks” have both been award winners.

Now Duvall shares the true story of “A Woman’s Place.” It tells the story of a a refuge for self-discovery that changed the lives of hundreds of women from 1974-82. Her book describes what happened when seven women left behind the lives they knew and created a commune deep in the Adirondack Mountains.

This author’s latest book, “Finding A Woman’s Place: The Story of a 1970s Feminist Collective in the Adirondacks” examines the fascinating history of this unusual place in time, a safe harbor for hundreds of women during the tumultuous times of what is referred to as the second wave of feminism. She brings a viewpoint to the story of both an active participant, attending a retreat at A Woman’s Place in 1974, and as a meticulous researcher examining historical documents and locating the principal founders and organizers of the commune to write the full story.

“I honor the women who had the courage to forge a new way of living for themselves and others,” Duvall said. “These women deserve to be remembered.”

Learn more about Lorraine’s award-winning books and this new one that is sure to glean accolades of its own at the Village Mercantile on March 21.

The Village Mercantile is at 97 Main St. in Saranac Lake and is open from 9 a.m. to 6 p.m. from Monday to Saturday; 9:30 a.m. to 4 p.m. on Sunday. The store features a large assortment of books including many by Adirondack authors.