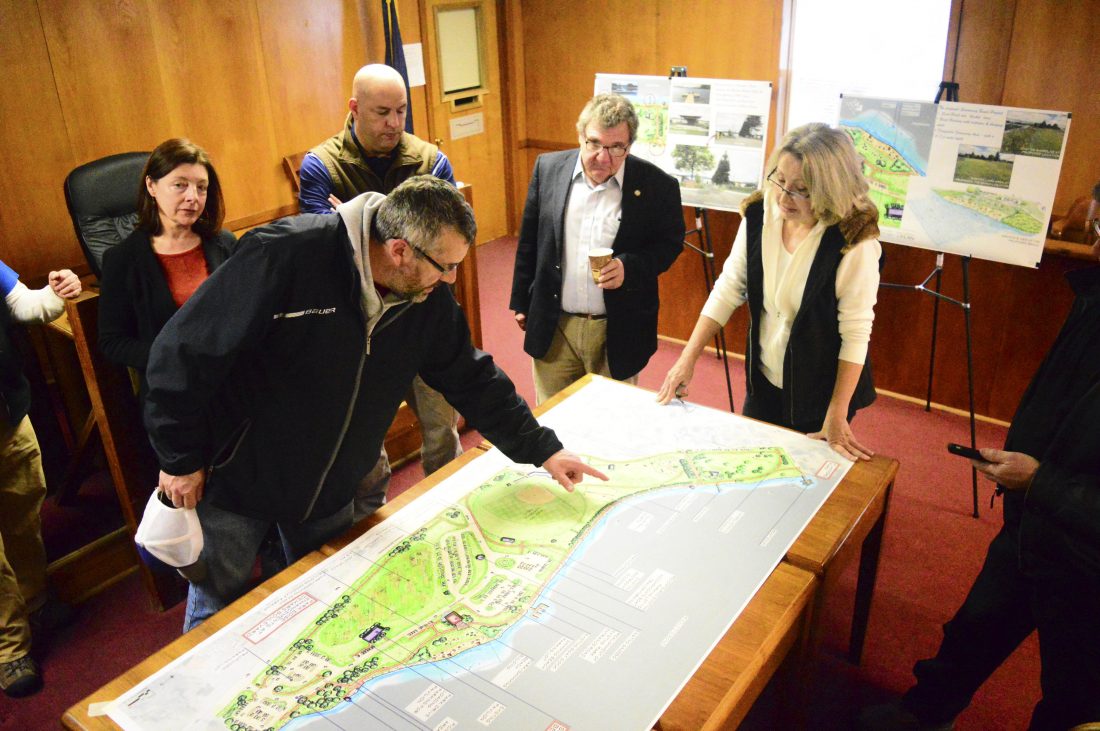 Jed Dukett points out an area of the Tupper Lake Municipal Park that floods with water from Raquette Pond every spring. This was one of the issues discussed at a public meeting about the future of the park and the village’s many planned projects there. (Enterprise photo — Aaron Cerbone)

TUPPER LAKE — On Tuesday the village showcased for public input a draft map of planned improvements and additions to the Municipal Waterfront Park.

The master plan is going to take a still to be determined amount of money, and the village will be applying for grants to pull it off. Projects at the park are planned to be funded through series of individual grants — some already awarded, some to be applied for in the future — and completed piece by piece in the coming years. The first project to be tackled is the expansion of the walking trail along the shoreline through Flanders Park, then along Demars Boulevard, eventually wrapping around the circumference of the park.

After that, there are plans for a beach, new parking lots, the conversion of Mill Street by Flanders Park into a walking-only midway, a fishing pier and possibly a new grandstand in the 2.5-acre event space field along the waterfront to host events like Woodsmen’s Days, which can no longer be held at the softball field.

Village Director of Community Development Melissa McManus said she thought the session yielded good public feedback, much of it positive.

“Who doesn’t like a park?” said Jere Tatich, the lead landscape architect from Elan.3 Consulting from Saratoga, who designed the map.

A state Department of State Local Waterfront Revitalization Program funding grant under Title 11 of the Environmental Protection Fund, which previously was used to fund part of the construction of the Sunset Stage in Flanders Park, included $232,000 for design and construction of waterfront park improvements.

Previous LWRP grants funded the construction of Little Loggers Park and were used to spark the Park Master Plan and Beach Feasibility Study five years ago. That master plan informed the creation of the maps laid before the public Tuesday.

Now, the village, its architects and grant getters are preparing to run the designs through all the necessary regulatory and grant agencies to get the needed approval, permits and money. Jere said they all wanted to show the plans to the community before bringing them to the Adirondack Park Agency and state departments of Health and Environmental Conservation.

Tatich said this will allow them to close in on an definite estimate cost for the whole project.

McManus said the projects will be completed in a similar way to the bandshell, using in-kind services, volunteer labor and shared services from local municipalities.

Tatich said he hopes the plans are designed to avoid any changes from the regulatory agencies. He said their main concerns are usually impacts on water bodies.

The beach is one of the signature items of this master plan. Mayor Paul Maroun has been talking about adding such a feature for years now, and said he believes a beach right off state Route 3 would stop thru-traffic driving by and bring passers-by into town.

Tatich said a beach does not cost much money. He did say they will need a permit for buoys and that the water floor will likely be pea stone instead of sand because sand drifts with currents.

Jim Lanthier has wanted to bring the horse pulls back to Woodsmen’s Days for years. His suggestion sparked a conversation about installing a grandstand at the north end of the park, similar to the one behind home plate at the River Pigs baseball field, the former softball field.

Because the River Pigs will be playing there this year the Woodsmen’s Days will not be able to use that area, so a grandstand at the north end would give the annual competition and festival a similar event space.

Everyone expressed a desire to go through with this addition.

The group said they would get someone from the Woodsman’s board to view the plan and give input.

The project keeps most of the existing features, including pavilions, bathrooms and sport courts. It includes plenty of shrubbery and trees all around the park, a boat dock at the end of Cliff Street, several new or expanded parking lots, with some accommodating trailers and lighting.

Jed Dukett, who is on the River Pigs Committee, asked about flooding in the park, specifically on the ball field, saying an annual pond forms in center field. McManus said they can’t stop the flooding completely, only mitigate how far it gets in.

“I don’t think we can hold the Raquette River back,” she said.

There were suggestions to raise the field a bit, like the Little League field.

The village has also been awarded a 2018 LWRP grant, which includes $57,500 for construction of Mill Street Park entrance and Demars Boulevard park edge improvements. The Aseel Legacy Fund, through the Adirondack Foundation, has provided $17,500 in matching funds for these improvements.

(CORRECTION: Jed Dukett’s last name was misspelled in an earlier version of this article. The Enterprise regrets the error.)