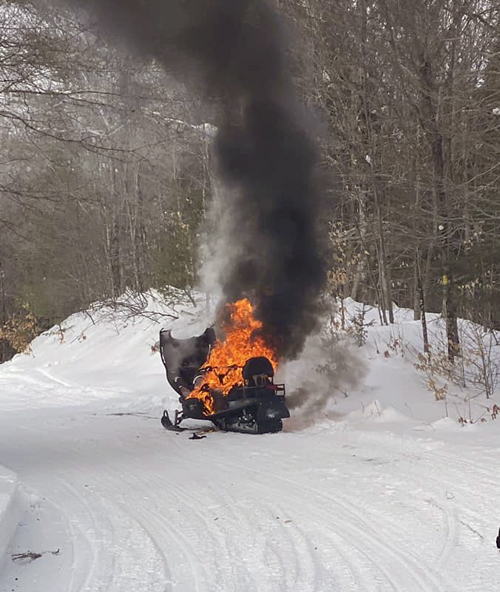 LOON LAKE — Howard Kemp was heading to a poker run Saturday with his daughter Janine and her husband Holland Meads when the snowmobile the couple was riding caught fire.

Janine and Holland, of Saranac Lake, got off safely.

The Bloomingdale, Paul Smiths-Gabriels and Saranac Lake volunteer fire departments responded to the fire on Thatcherville Road near Loon Lake at 11:34 a.m. Saturday, but only a few members were able to make it to the scene.

Kemp, of Silver Lake, said he does not know what started the fire in the snowmobile, which he owns. He suspects that since the sled has oil-injection, it may have had a leak.

Holland said they had ridden around 20 minutes down Thatcherville Road when they came to a stop and restarted the sled. He said it started shooting flames out from the vents on its side.

“I’m not a snowmobile guy, but I know that that’s probably not right,” Holland said.

Kemp said he was in front and turned back around while Holland threw snow on the fire to put it out. Kemp and Janine got on his sled and went back to his truck for a tow strap.

But the fire flared back up with Holland there alone.

Holland said all the riders that passed him stopped and tried to help with calling 911, but there was no cellphone service.

By the time Kemp and Janine got back, “There was nothing left of it,” Kemp said. They turned around to get cell service.

The Bloomingdale Volunteer Fire Department said due to the remote location, members could not get back to the scene with vehicles. Kemp said one member from the department got out there with a fire extinguisher, but the snowmobile, which had been engulfed in flames, had mostly burned itself out by then.

Kemp said all that was left was a charred motor and storage rack.

All departments were back in service after 2 p.m.