Tom Rath, a short-term rental owner who represented a coalition of residents who own rentals, speaks during a public hearing at the Conference Center Tuesday night. (Enterprise photo — Elizabeth Izzo) 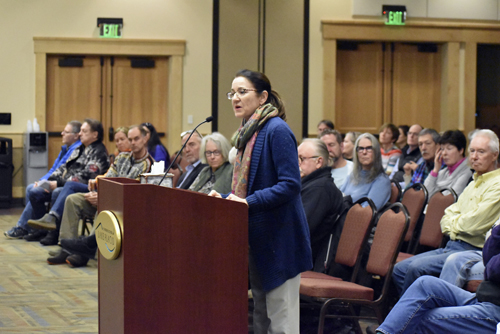 LAKE PLACID — Except for one man who said it was “for the most part sound,” none of the 40 speakers had anything good to say about a new law regulating short-term rentals.

Most people who spoke at Tuesday evening’s public hearing railed against the law, as it is proposed. Some speakers argued a proposed 90-day occupancy cap for each rental unit could hurt the local economy and force residents who rely on rental revenue to sell their homes. Others urged local officials not to adopt the law at all, arguing that doing so would inadvertently legalize rentals in residential districts.

The public hearing, held at the Conference Center in Lake Placid, marked the third time in the last 13 months that local officials have moved forward a set of proposed short-term vacation rental regulations. The last two drafts of the town of North Elba and village of Lake Placid’s joint law were met with mixed reviews from the public. Some argued the regulations didn’t go far enough while others argued they were too restrictive.

This version of the village and town’s joint law would require those who rent out their properties on sites such as Airbnb, Vrbo and HomeAway to apply for and secure a permit. It would also require rental owners to limit the number of visitors who stay on site, and ensure there’s adequate off-street parking and septic capacity to serve those visitors. Among the biggest changes in this version of the law is that town and village officials have differentiated between short-term rentals that are “owner-occupied” and those that aren’t. People who live on their property for “at least 275 days per calendar year” and are on premises from 10 p.m. to 6 a.m. during the term of each rental would still be required to obtain a permit prior to listing their property, but they would not have to adhere to a proposed maximum 90-day-per-calendar-year rental period. 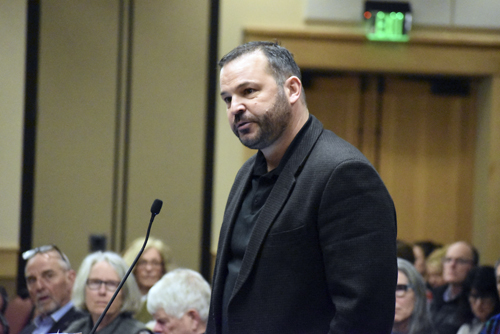 Tom Rath, a short-term rental owner who represented a coalition of residents who own rentals, speaks during a public hearing at the Conference Center Tuesday night. (Enterprise photo — Elizabeth Izzo)

But unlike the last public hearing, the discussion didn’t revolve around the desired identity of the community so much as the language of the law itself, and residents’ desired approach to curbing what has emerged as the central issue: the perceived impact of rentals on residents’ sense of community.

Another difference was that most of the short-term rental owners who spoke at this hearing identified themselves as local residents.

A contingent of longtime residents aligned behind the idea of the town and village not adopting the proposed law at all, but instead enforcing the existing joint land use code.

Many of these residents argued the code already bars commercial businesses — a definition that they say includes vacation rentals — from areas zoned as residential. By adopting a law that establishes a permit system, the residents said rentals will be inadvertently legalized despite the existing land use code.

“This isn’t Mrs. Jones teaching piano three nights a week out of her home,” said Karen Huttlinger, a longtime resident. “These are people that are funneling hundreds of people through their house. I want neighbors.”

Denise Dramm, a resident and owner of the Placid Bay Inn, chastised local officials for what she sees as a lack of code enforcement that has allowed the vacation rental industry to blossom.

“For the last 15 years, they have done nothing,” she said. “They have not done their due diligence in enforcing this code.

“We did enforce the sandwich board code,” Dramm added, drawing laughter from the audience.

Wayne Johnston — a resident, business owner and member of the Residents for a Sustainable Community group — said passing the legislation as proposed would be “wrong.”

“It wipes out protections for residential neighborhoods in the land use code,” he said, “and many of the stringent restrictions for short-term rentals are probably unenforceable.”

Johnston suggested the board restrict all new vacation rentals, conduct a public review of the land use code and potentially update it, create a registration system for existing rentals that enforces health and safety standards, and make a distinction between rentals that are owned locally and non-locally.

“Moving ahead with the proposed regulations will further divide this community,” he said. “The most important thing is to achieve a community consensus that will carry us through future challenges.”

Short-term rental owners who spoke, including those who live in Lake Placid year-round, took issue with a proposed 90-day maximum occupancy limit included in the latest draft of the law. Many argued the cap would eliminate income they need to continue being able to afford to live in the area.

“We’re Adirondackers making a living here in the Adirondacks. We’re not all predatory investors,” said Johnathan Esper, who works as a photographer and owns two vacation rentals, one in Lake Placid and another in Wilmington. “A 90-day cap would halve my income across the board.”

“I’m looking to buy a house,” said Tatyana Reinboldt, an Iowa native who moved here after visiting. “In order to buy a house, I’m going to have to rent out rooms. We live in a resort town. I think limiting rentals to 90 days would limit potential income that would help young people buy a home.”

Nick Seleni, who owns a construction and caretaking business and does not own a vacation rental, said the proposed law would have “several side effects, none of them positive.” He pointed to the potential impact on occupancy tax revenue by limiting occupancy to 90 days — and painted a picture of a village where investor-owned properties would “remain dark and uninviting” while residents who rely on rental revenue would “have to sell.”

“With less money coming into town, less people will be employed,” he said. “If you can’t offer the public what they want, they will go elsewhere.”

Tom Rath, representing a group called Lake Placid Resident Hosts, argued the proposed definition of an owner-occupied rental in the law effectively imposes a curfew on property owners — that they would have to always be home between 10 p.m. and 6 a.m. when they have guests.

Kevin Fountain said the 90-day limit would be “counterproductive” and would negatively impact the local cleaners, contractors and property managers employed by vacation rental owners.

“Maybe a one-size-fits-all law isn’t the best,” he said.

Written comments on the law will continue to be accepted until Tuesday, March 3 at 6 p.m., according to village Mayor Craig Randall.

“The boards will accept this information, it becomes part of the record we use to make our ultimate deliberations on,” Randall said Tuesday. “This is a matter the boards will take up in the coming days.”

A full version of the draft legislation is available on both the town and village websites.

(CORRECTION: An earlier version of this article incorrectly said Nick Seleni owns a vacation rental. The Enterprise regrets the error.)