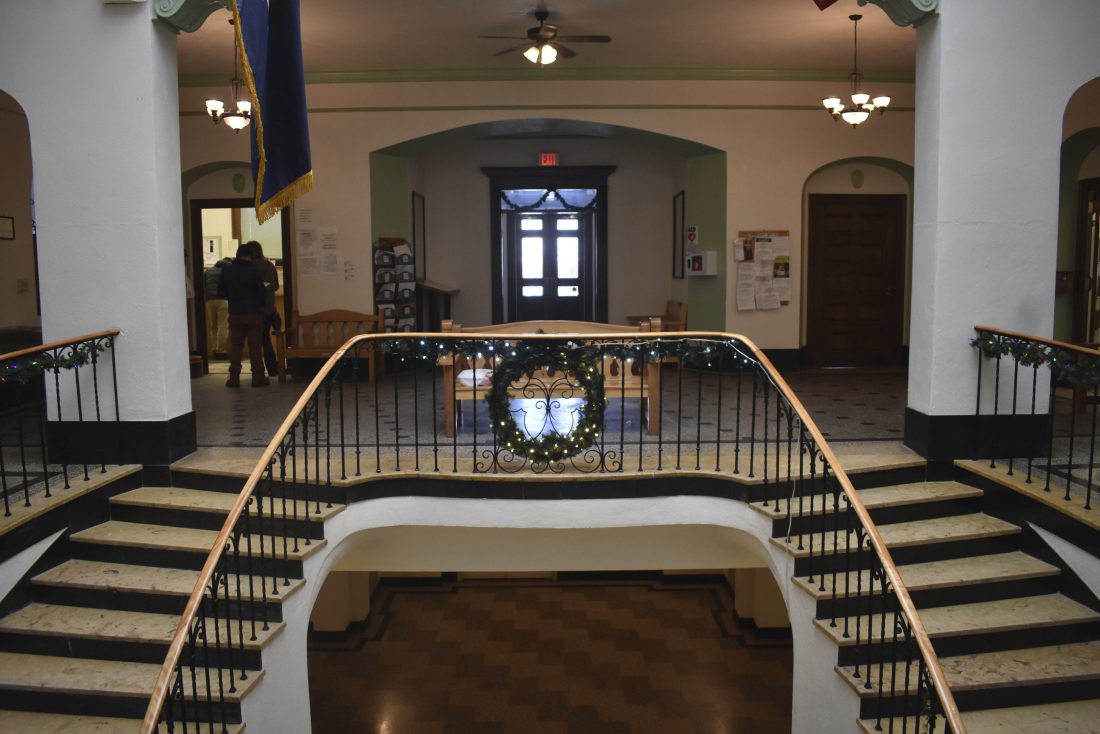 The lobby of the Harrietstown Town Hall is seen in February. (Enterprise photo — Griffin Kelly)

After the state Unified Court System conducted a security inspection at the town hall, town Justice Ken McLaughlin recommended buying updated surveillance cameras for the lobby and courtroom and panic buttons for the courtroom and clerk’s office.

Thursday night, the council originally proposed allocating money for security cameras. McLaughlin interjected and asked whether that includes new panic buttons, town Supervisor Mike Kilroy said no. McLaughlin then threw a paper in the air, said, “Well, there’s no reason for me to be here then,” and left the meeting.

“The way he talks to us is not right,” Kilroy said.

In a phone interview Thursday, McLaughlin said there haven’t been any violent or threatening incidents in the courtroom recently but that’s no excuse to not have better security measures.

“Why would you want to wait around until an incident happens before you start taking precautions,” he said.

McLaughlin approached the council about the issues in August 2019, and Kilroy said he set aside $10,000 in the town budget for security spending.

The town courtroom has two cameras, but they don’t record, and the panic button doesn’t work. Kilroy agreed the town hall doesn’t have the best security measures but said the council had more questions before it was ready to spend money on equipment they don’t understand. The council questioned what type of cameras the town should buy, who would install them, does the town hall’s electrical work need to be updated before installing security measures and what are the options for installing wireless cameras.

“The board, me included, didn’t know what we needed or what is best for us,” he said. “We want to solve the problem right the first time. I don’t want to spend $10,000 four times.”

Instead of tabling the proposal, the council referred it to committee, meaning, in this case, Councilwoman Ashley Milne will research security equipment and installation companies to see what the best options are.

The town hall does have cameras in the downstairs lobby that feed into the town assessor’s office. Kilroy said they were put in to monitor a person who would often use the public restroom for bathing purposes and leave it a mess.

WASHINGTON — Seniors receiving Social Security who don’t normally file tax returns will not have to do so to ...

KEENE — The hiker shuttle run by the town of Keene will not operate for the foreseeable future. The shuttle, ...

PLATTSBURGH — The continued COVID-19 pandemic has caused a pause in some industries, but a local staffing agency ...

Lawmakers line up behind $3B environment bond act