The 1980 Olympic cauldron was lit after the torch run Friday evening at the North Elba Show Grounds. It was part of the opening ceremony for Lake Placid’s 40th anniversary celebration of the 1980 Olympic Winter Games. (Enterprise photo — Andy Flynn)

Steve Simon, a torchbearer from the 1980 Olympic Winter Games, carries the flame and flag down Main Street in Lake Placid on Friday. A team of torchbearers carried the flame to the opening ceremonies of the 40th anniversary celebration at the North Elba Show Grounds. (Enterprise photo — Elizabeth Izzo)

Roni Raccoon, the mascot of the 1980 Olympic Winter Games, poses Thursday evening at the Lake Placid Olympic Museum after blowing out the candles on his 40th birthday cake. The museum was opening a new exhibit — “Totally ‘80” — to celebrate the 40th anniversary of the 1980 games. (Enterprise photo — Andy Flynn) 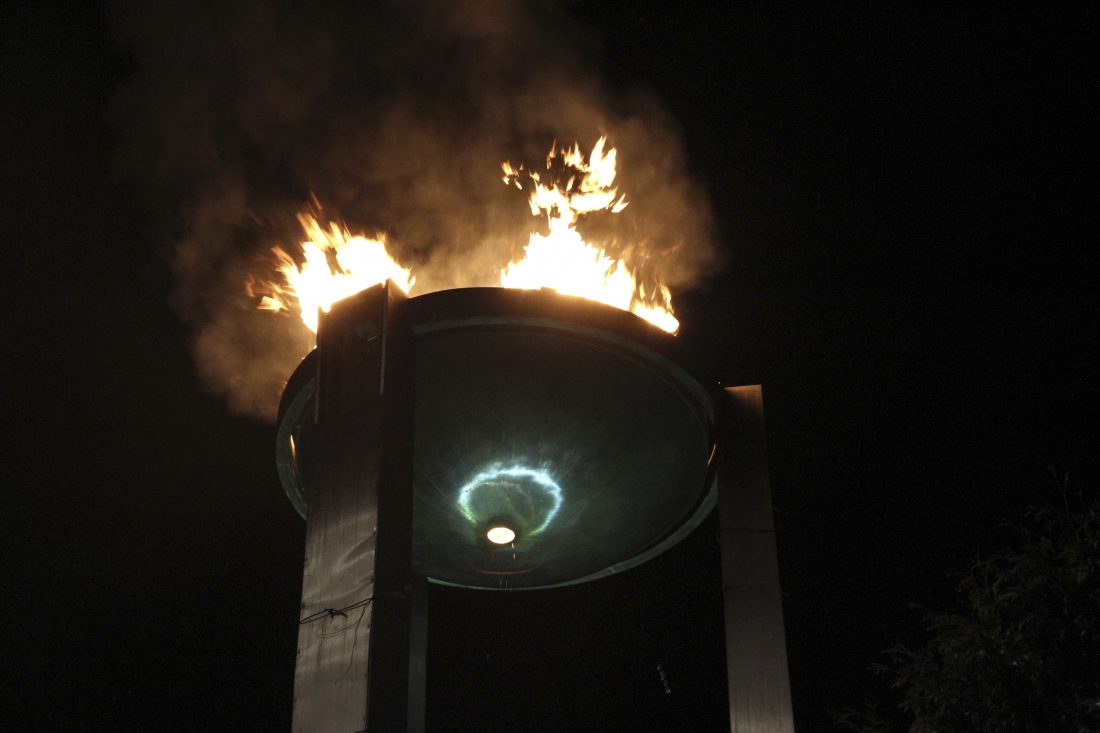 The 1980 Olympic cauldron was lit after the torch run Friday evening at the North Elba Show Grounds. It was part of the opening ceremony for Lake Placid’s 40th anniversary celebration of the 1980 Olympic Winter Games. (Enterprise photo — Andy Flynn)

LAKE PLACID — When Scott Hamilton landed in Lake Placid for the first time, he had no inkling that he’d one day return here as a member of the U.S. Olympic figure skating team.

He was a kid, not yet very far into his skating career, here for a youth competition. At the time, Hamilton was just excited to visit a place that had hosted an Olympic Winter Games.

“I must’ve been 11 or 12. I came in second… the judge said it was because I did too many doubles instead of singles,” Hamilton said. He laughed. “It was very fun to be in Lake Placid. It was before the ’80 rink was built. It was just the Lussi Rink and the ’32 rink. I had no inclination that I would ever be competing in the Olympics.”

Hamilton’s early skating career didn’t necessarily mark him as an athlete to watch. In 1977, he placed ninth in the U.S. Figure Skating Championships. Then his mother, Dorothy, died of cancer.

“When my mom died of cancer, I realized I never really dedicated myself 100% to skating, so I could be successful,” he said. “I decided at every practice, and at every performance, I would honor her. I’d try to be the best I could ever be on the ice.” 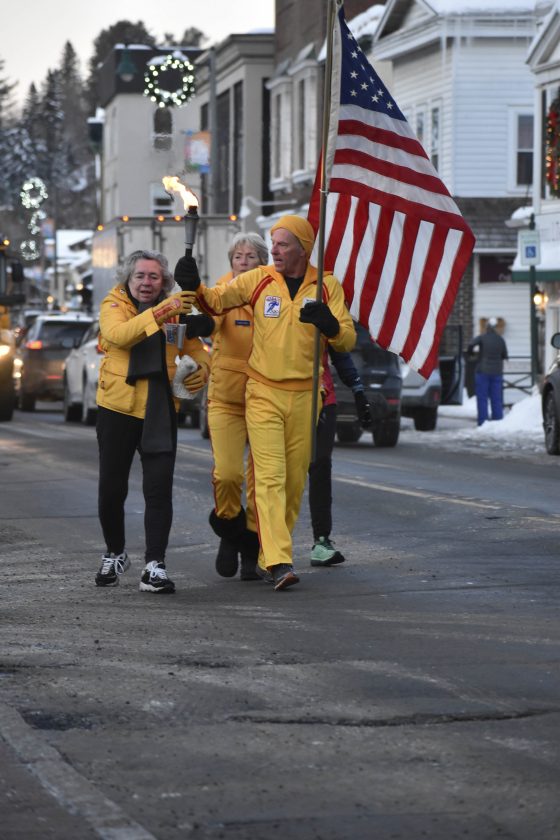 Steve Simon, a torchbearer from the 1980 Olympic Winter Games, carries the flame and flag down Main Street in Lake Placid on Friday. A team of torchbearers carried the flame to the opening ceremonies of the 40th anniversary celebration at the North Elba Show Grounds. (Enterprise photo — Elizabeth Izzo)

“All of it was just surreal,” Hamilton said. “I’d entered that season with a great deal of confidence.”

He remembers fantasizing about being chosen to carry the American flag during the opening ceremonies in Lake Placid. He thought it was a pipe dream.

But then, while watching a movie at the Olympic Village — which is now the Federal Correctional Institution in Ray Brook — he was pulled aside.

“The team captains chose me to carry the flag. And I was like, ‘Why?'” Hamilton said. “It was a remarkable honor. Those things are given, not earned, and in that regard I’ll always be grateful for that opportunity to lead the team into the opening ceremony.” 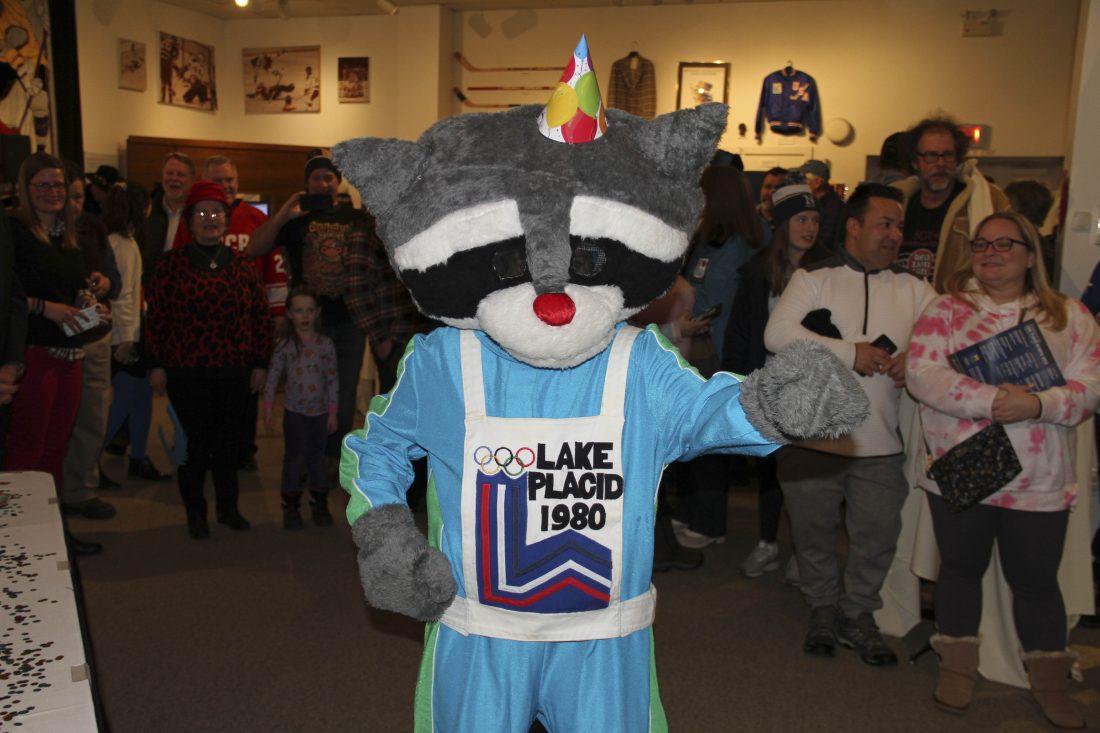 Roni Raccoon, the mascot of the 1980 Olympic Winter Games, poses Thursday evening at the Lake Placid Olympic Museum after blowing out the candles on his 40th birthday cake. The museum was opening a new exhibit — “Totally ‘80” — to celebrate the 40th anniversary of the 1980 games. (Enterprise photo — Andy Flynn)

That had been Hamilton’s first Olympic Games. Asked what his favorite memories were from that time, Hamilton shared his experiences not as a competitor, but as a spectator that got to watch some historic moments.

“Two of the (U.S. hockey team players) were from Bowling Green, Ohio,” he said. That’s where he grew up. “I think we went to every single game but the one against West Germany. The Russia game… it was really exciting to see that.”

Throughout his skating career, Hamilton was known for his backflips on ice — a move that is illegal in national and Olympic competitions, but considered a popular crowd-pleaser. Alongside IMG Executive Bob Kain, he created Stars on Ice in 1986. The touring show was then called Scott Hamilton’s American Tour.

“As a cast and company, we worked really hard,” he said. “I tell my kids, ‘Nothing replaces the work.’ Natural ability will only take you so far, but without dedicating time and effort, things will go away quickly. We knew it was going to take time to build an audience.”

Stars on Ice is still a popular figure skating show, its latest stop in Lake Placid on Dec. 30, 2019 drawing thousands of spectators to the Olympic Center.

Hamilton will be back in Lake Placid — a place he says is “like a second home” — to host the Sk8 to Elimin8 Frozen 5K at the Olympic Speedskating Oval on Tuesday, Feb. 18 from 3 to 5 p.m. The event was born through a collaboration with the state Olympic Regional Development Authority’s new director of sport, Paul Wylie, a former Olympic figure skater himself. ORDA manages the local Olympic venues.

Hamilton said they wanted to host an event that could leverage the celebration of the 40th anniversary of the XIII Olympic Winter Games for a good cause.

“We thought, ‘How do we use this to have an impact on the community, and the nation and the world?'” he said.

The proceeds from the Frozen 5K will benefit Hamilton’s nonprofit organization, Scott Hamilton CARES, which raises money for cancer immunotherapy research. A portion of the proceeds will also benefit the Adirondack Health Merrill Center for Oncology in Saranac Lake. Adirondack Health’s portion will help cancer patients with travel expenses.

Hamilton is no stranger to cancer. Years after his mother died from cancer, he was diagnosed with testicular cancer in 1997. He returned to the ice that same year after his oncologist said he was in remission, according to the New York Times. In 2004, he announced he had a benign brain tumor that was later treated, and in 2010 he underwent brain surgery to prevent the tumor from reoccurring. Three years ago, Hamilton announced that he was again diagnosed with a brain tumor, and later said the tumor had shrunk.

The online fundraiser for the Frozen 5K at mysk8.org/LakePlacidNY2020 had a goal of $10,000 at first. But the community quickly pulled together and has since raised more than quadruple that amount. As of Friday evening, nearly $50,000 had been raised. Hamilton said there have been individual donors here than he’s seen at some events they’ve hosted in New York City.

“It’s exciting,” he said. “I’m just so proud of Lake Placid for the incredible amount that they’ve been able to raise. It blows me away.”

Those interested in participating in the Frozen 5K can register online at www.mysk8.org/LakePlacidNY2020. Entry costs $25 per person and includes a “Sk8 to Elimin8 Cancer” T-shirt. Those interested in volunteering at the event can contact Adirondack Health Executive Director Hannah Hanford at 518-897-2348.