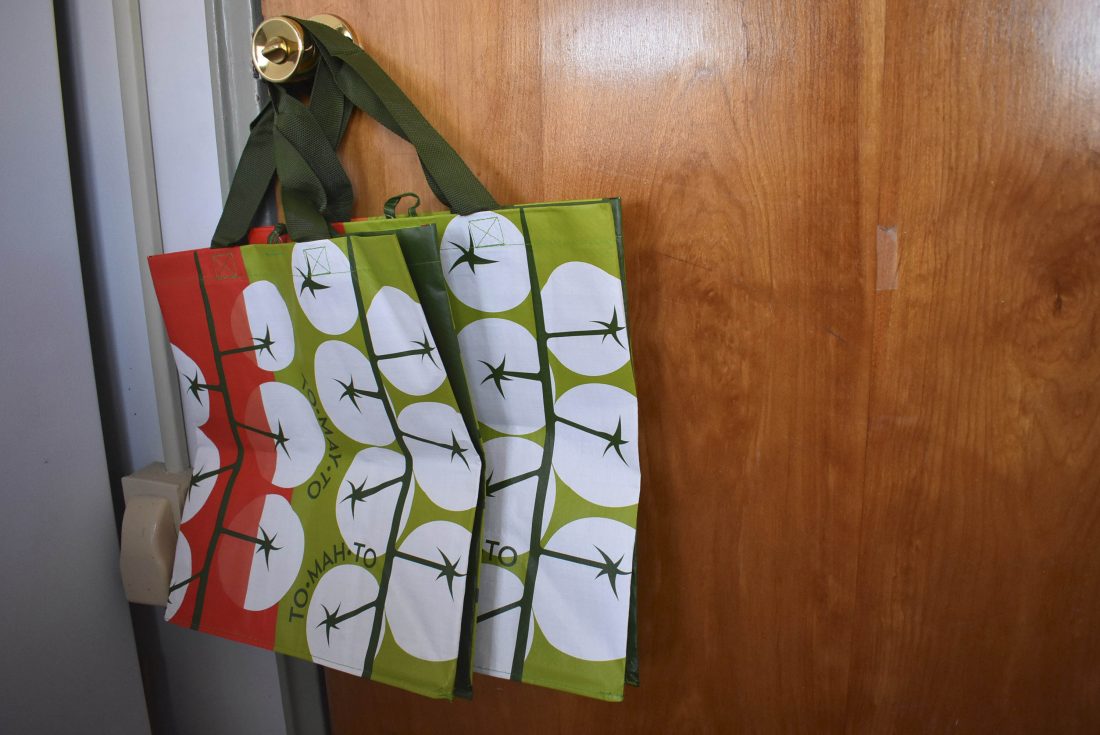 Non-woven polypropylene bags like the two seen here have been on the rise as more and more states ban single-use plastic bags at retail and grocery checkouts. (Enterprise photo — Griffin Kelly)

SARANAC LAKE – Business owners can face up to $500 in fines after March 1 if they’re still offering single-use plastic bags. The village Chamber of Commerce and environmental group TriLakes 350 were supposed to host an informational meeting next week on the state-wide ban, but it was canceled because state representatives said they were not available to answer questions then.

The information session originally was scheduled for Tuesday, Feb. 25. Chamber of Commerce Executive Director Pat Murphy said the plan was to have a state Department of Environmental Conservation representative in the room to help explain the law. However, the state couldn’t commit any representatives to that date, so the informational meeting was pushed until a DEC rep is available, possibly after the law goes into effect. Murphy said in a phone interview Wednesday.

The law and information explaining it can be found at dec.ny.gov.

TriLakes 350 is the local chapter of the global group 350.org, whose mission is to reduce the causes of climate change.

Murphy said he wanted to get the Chamber of Commerce involved with the informational session because many chamber members are local businesses that provide single-use plastic bags to customers. If those businesses were to still offer plastic bags after the law takes effect, they could face up to $500 in fines from the state.

“That can really rack up if they don’t get rid of the bags immediately,” he said.

Plastic bags are often seen as a major culprit in pollution and waste. They’re also harder to recycle, occasionally getting caught in machines. However, plastic bags may not be the worst option. According to a 2017 study from the recycling advocacy group Recyc-Quebec, plastic bags require less energy and materials to produce, and they often are reused as trash bags. It says paper bags have high impacts on human health, quality of the ecosystem and use of fossil fuels. The study also suggests cotton bags are not a good alternative because they require “between 100 and 2,954 uses for its environmental impact to be equivalent to the environmental impacts of the conventional plastic bag.”

Environmental groups often advocate using reusable non-woven polypropylene bags (NWPP) made from recycled plastic. It’s the same kind of material from which those blue, waterproof tarps are made.

“We don’t recommend paper bags,” said Peggy Wiltberger of TriLakes 350’s plastic committee. “We haven’t developed a preference for canvas bags or the recycled material bags that you use over and over again.”

Wiltberger said she’s noticed chain stores such as Kinney Drugs, Hannaford and Tops taking to the NWPP bags nicely. Those businesses tend to offer reusable bags for $1 each.

“It seems like all the bigger stores are doing it,” Wiltberger said. “The smaller stores may be less aware of it.”

Gov. Andrew Cuomo, the state Legislature and many media outlets have often referred to the new law as a “plastic bag ban” ever since Cuomo announced the bill in April 2018. That term is broad and doesn’t represent the reality of the legislation. The law focuses more on the reduction of single-use bags, mainly at retail checkout counters. There are 11 exemptions to the law.

¯ bags for bulk items such as fruits, vegetables, grains or candy

¯ bags for food sliced or prepared to order

¯ a newspaper bag for delivery to a subscriber

¯ prepackaged bags for sale to a customer

¯ bags for takeout food at restaurants

Any business offering paper carryout bags in place of single-use plastic bags can charge five cents per bag. These fees would be waived for people on food stamps.

Personally, Murphy said he’s not sure how much the reduction will lessen the carbon footprint made by single-use bags but thinks it could be a start for further green initiatives.

“I think the intent of the law is proactive, and it’s important for us to look at where our plastic waste is coming from,” he said. “If you look at other sources of plastic, it’s everywhere. This is just one thing that can reduce our plastic use. This type of law has been done in other states, and New York looked at it as a model for a step in the right direction. But plastic use is a cultural phenomenon that will have to change over a long period of time.”

Wiltberger said the reduction will make a huge difference.

“The (Environmental Protection Agency) has said that every bit of plastic ever made is still in existence,” she said in a phone interview Wednesday. “The toxic legacy we’re leaving for future generations is incomprehensible.”