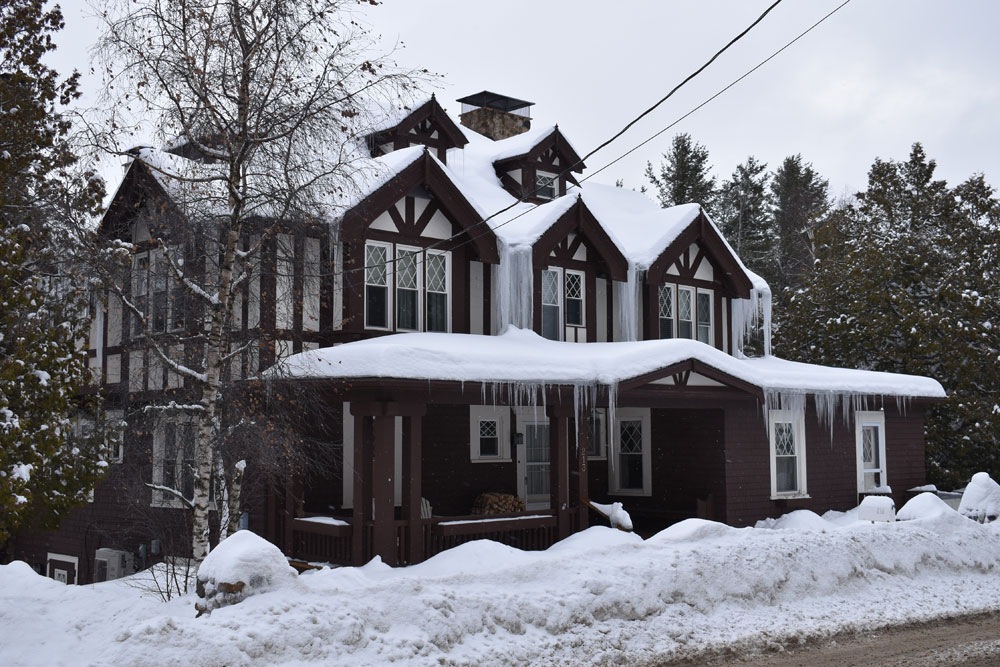 The owner of this Victor Herbert Road home is asking the North Elba-Lake Placid Joint Review Board to grant her a conditional use permit to allow her to use this property as a boarding house in a residential neighborhood. (Enterprise photo — Elizabeth Izzo)

LAKE PLACID — A property owner’s request to operate what is described as a boarding house in the historic Signal Hill neighborhood has spurred a legal battle that could have a broader impact on this community’s short-term vacation rental debate.

Eight people who own homes in the Victor Herbert Road neighborhood have hired Lake Placid attorney James Brooks to represent them as they seek to quell the request, arguing that the home doesn’t meet code requirements for a boarding house. Huda Scheidelman, the property owner and a member of pro-short term rental advocacy group Gold Medal Hospitality, is being represented by Lake Placid attorney Matthew Norfolk.

Scheidelman, through her Lake Placid Chalet LLC, has asked the North Elba-Lake Placid Joint Review Board to grant her a conditional use permit that would allow her to use her 213 Victor Herbert Road home. It is located in a neighborhood zoned “town residential.”

According to the application, the home has four units with a total of three king beds, five queen beds, nine twin beds, one day-use bed and 10 bathrooms. The home is currently listed on Airbnb for $1,500 per night.

Scheidelman’s request was received by the Building and Planning Department on Dec. 30, 2019. The Joint Review Board heard comments on the application at its meeting this past Wednesday.

Scheidelman has had her property listed on Airbnb since at least March 2017. It’s unclear why she decided to submit this request now.

Scheidelman’s application comes as the North Elba Town Council and Lake Placid Village Board of Trustees prepare for a public hearing on the latest version of a proposed local law regulating short-term vacation rentals.

One of her neighbors, Will Hofner, wrote in a letter to the Joint Review Board that he feared the ramifications if the application was approved.

“Should the Conditional Use Permit be allowed to pass, I fear it will serve as a ‘Trojan Horse’ for similar property re-zonings on Signal Hill and a long-term detriment to real estate values,” he wrote. “If the Village incentivizes the chopping up of big homes for unrelated boarders in residential neighborhoods, the long-term consequences would be disastrous for us single-family households.”

Eight people who own homes near Scheidelman’s property have joined together to push back against her request.

“The reason my clients don’t want it approved in the fashion it has been presented is that they do not want a boarding house in that area in Lake Placid, which is probably one of the more significant residential districts in town,” said Brooks. “They also do not believe there is sufficient parking on Victor Herbert Road, and do not believe the applicant has the right to access a (nearby) private drive called Yacht Club Way.

In a letter on behalf of the neighbors — who include Jerry and Judith Strack, James and Jane McGraw, Michael Urfirer and Donalda Lee Fordyce-Urfirer, E. Philip and Carole Saunders — Brooks pointed to the definition of a “boarding house” in the local land use code.

A boarding house is defined in the code as “a building (in) which rooms are offered for rent on a transient basis, and which may or may not involve the offering of meals.” But the code defines transient as “any pattern of rental or leasing under which a dwelling unit is rented or leased for a period of less than 30 days or more than two occasions in a single calendar year.”

According to a floor plan posted on the Airbnb listing, the home has one kitchen. That’s a problem, Brooks wrote in the letter.

Brooks argued that because the units being rented don’t have cooking facilities, they don’t meet the standard for a “dwelling unit” under the code. A dwelling unit is defined as “a building or portion thereof providing complete housekeeping facilities for one family, including living, sleeping, cooking and sanitary facilities.” A family is defined as “a group of people, related or not related, living together as a common household, with numbers of persons and impacts typical of those of a single family.”

“This application does not establish that each of the 4 dwelling units have their own cooking facilities,” Brooks wrote. “They do not.”

Therefore, he said, “it must be denied. At best a use variance might be sought but that is a function of the (Zoning Board of Appeals).”

Brooks also argued that the impact of use by visitors isn’t the same as that of a single family. He wrote that his clients have experienced “loud and raucous late night drinking/singing/cheering/yelling and screaming groups of transients or teams on many occasions” — though they didn’t call the police because they were “aware of the limited police forces” late at night. Therefore, he said, they tried to “bear it without being chronic complainers so the police forces remain available” to do other things.

A neighbor not represented by Brooks, Will Hofner, also submitted a letter sharing his concerns about the ramifications of Scheidelman’s request.

His family bought their home in the Signal Hill neighborhood in 1978, he wrote.

“Until Ms. Scheidelman’s purchase (in 2015), the premises in question was an owner-occupied home and not used as a transient lodging facility,” he said.

He wrote that the property’s apparent lack of an on-site manager spurs concerns about daily upkeep such as trash removal, as well as property maintenance. He said he feared the proposed boarding house model has a “high probability of noise and disruption.”

The Joint Review Board took no action on Scheidelman’s request this past Wednesday. The board meets again on Wednesday, Feb. 19 at 5:30 p.m.